HENRICO, Virginia – Governor Glenn Youngkin announced Wednesday that he wants the General Assembly to pass a bill suspending Virginia’s 26.2 gas tax and 27-cent diesel tax for three months, spanning May, June, and July. That’s a pivot from his campaign promise to suspend the five-cent gas-tax price increase for a year, a proposal that the Senate opposed. Youngkin said rising gas prices predate Russia’s recent invasion of Ukraine and the economic impact from sanctions placed on Russia.

“We saw of course prior to that was gas prices in Virginia had gone up a dollar. And they’ve gone up another 80 cents, and this is just part of the inflationary pressures that Virginians are feeling all over,” Youngkin told reporters after pumping gas for a few supporters.

“We’re in a moment right now where we need to do something, do something real and fast. So I will in fact send the bill down to the legislature when they come back to our special session to suspend the entire gas tax for three months,” Youngkin said. 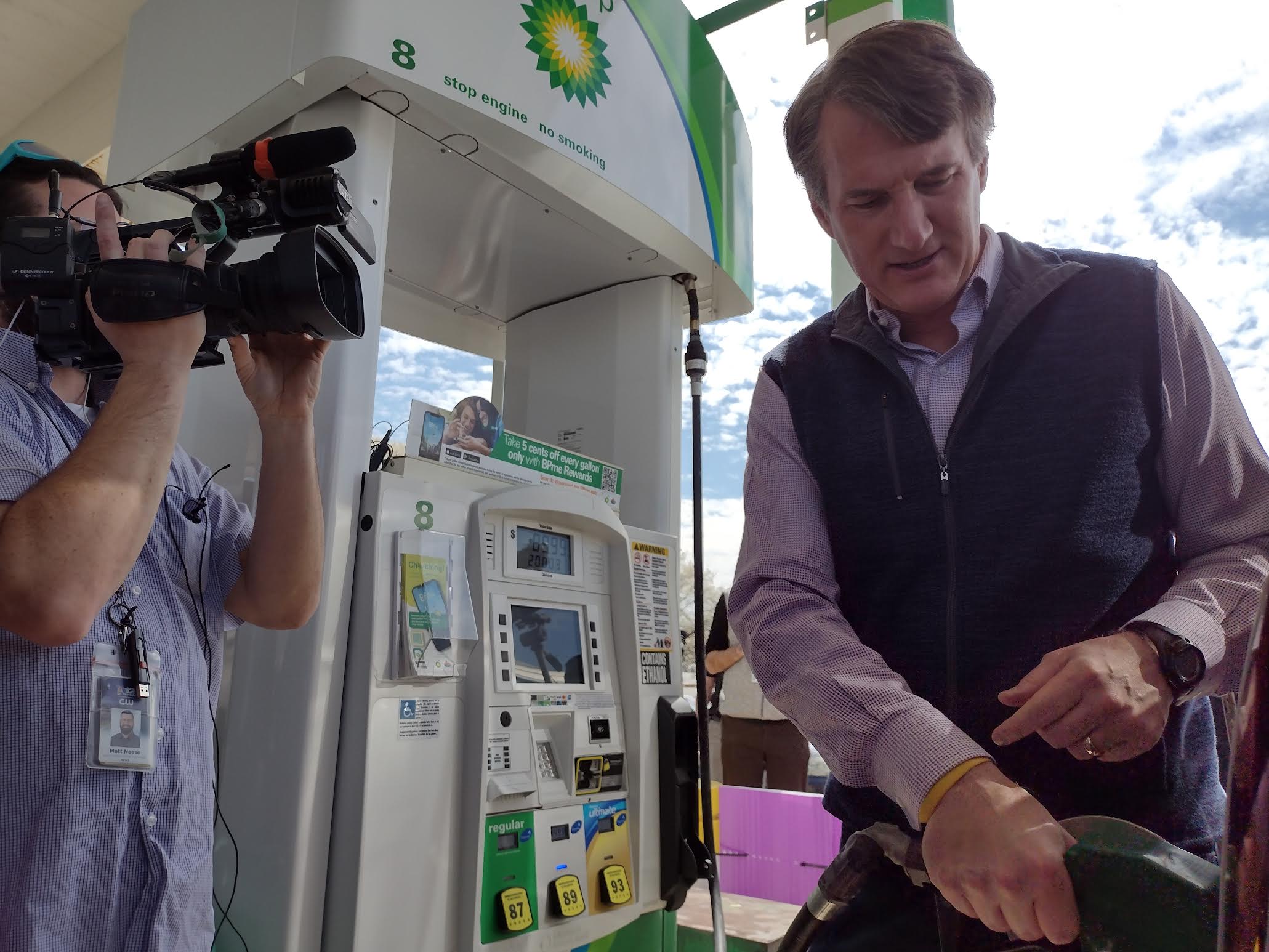 He said that would cost over $4 million to the Commonwealth Transportation Fund, but he said he expects that fund to have $1.1 billion more than previously expected, leaving $7 million in unexpected funds. After the three-month period elapses, the tax would be phased back in, the governor said. The tax holiday is similar to proposals advanced by other states.

The General Assembly adjourned on Saturday without passing a budget. Legislators are working to craft a compromise between Youngkin’s tax relief bundled in the House budget, and more one-time spending in the Senate budget that wouldn’t reduce state revenues as much. House Appropriations Chair Barry Knight has said Youngkin will call a special session to pass the budget and other uncompleted bills once the budget compromise is ready.

House Republicans praised the plan in a press release.

“Governor Youngkin’s proposal will ease the pain at the pump for families, and it will do so without harming the Commonwealth’s transportation funding. This is a responsible, common-sense measure to help all Virginians struggling with increased costs,” Speaker of the House Todd Gilbert (R-Shenandoah) said.

Knight touted the $1.1 billion in unanticipated revenue predicted for the next two fiscal years.

He said, “Inflation is skyrocketing and gas prices are at a record high. With revenues this strong, there’s no reason not to provide as much relief to Virginia’s hard-working families as possible as soon as possible.”

Senate Democrats expressed caution on Wednesday; their support will be critical for the plan to pass.

“While we can understand Governor Youngkin’s desire to address high prices at the gas pump, fuel costs have actually been falling – 40 cents per gallon in the last four days. The Commonwealth’s transportation budget relies on gas tax revenue; in my district, the region can’t currently maintain our current infrastructure, much less any new construction,” Senate Majority Leader Dick Saslaw (D-Fairfax) said in a release obtained by WHSV. “As final negotiations take place, we need to make sure we can provide relief for Virginians while still maintaining a robust and responsible budget. Senate Democrats look forward to working with Governor Youngkin, Senate Republicans, and the House of Delegates to achieve these and many other goals. Let’s get to work.”

The Republican Party of Virginia issued its own press release: “Last month, Senate Democrats blocked legislation that would have lowered the gas tax amid rising prices. Thanks to Governor Youngkin’s leadership, they will now have a chance to correct that mistake. Democrats should bear in mind that a vote against the Gas Tax Holiday is a vote against working families, and now is no time to play petty partisan games.”