In an interview with The Connecticut Star, Hyde said he is seeing Americans’ constitutional rights being “undermined” in both Washington, D.C. and his own state of Connecticut.

“I decided to run because I love America,” he explained:

I’m an America-first kind of candidate. I want to see energy independence, your Constitutional rights, your Bill of Rights, everything upheld for you. Bring power back to the people. So I’m running on the fact that I want to help America.

Hyde says the policies of Connecticut’s past and current leadership, as well as those of the Biden administration, have led to a stagnant economy. He would end government “by regulations” that only serves to hurt small business, and return manufacturing to America once again.

The dotted line represents Biden’s “Inaugeration” and his historic failure as a president to the right. #Bidenflation pic.twitter.com/Xd2hdLM8Y2 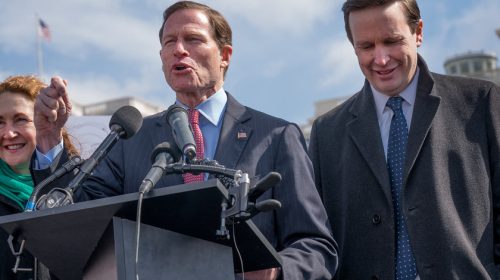 Hyde would also like to see term limits in place:

I want to see more people run for office, regular people, anyone that I think is an awesome American. Not these politicians that have been there for 20 or 30 years. No, absolutely not. After two terms, you’re done.

He says he will focus on job creation and policies that will grow the state’s economy as well as invest in infrastructure and, especially, support the military.

Hyde says, as a U.S. senator, he will fight for religious liberty, Americans’ First and Second Amendment rights, and for a return to the Constitution as the foundation of the rule of law.

“This is what makes our country great,” he said.

He noted on Twitter Woke culture is dragging America down.

“Everything woke goes broke,” he quipped, observing the decline in Disney’s stock and attendance since it battled against Florida’s new Parental Rights in Education law.

As his website bio notes, Hyde is a pre-9/11 war veteran who enlisted in 1999 while attending Central Connecticut State University. Following six years in the United States Marine Corps, with service in the Iraqi theater during the conflict’s climax, Hyde then left military service and created his own small business in Avon, Connecticut.

“The small business didn’t stay ‘small’ long and quickly grew to over 100 employees as a full-service construction firm,” his bio observes.

He has also served as a champion for Toys for Tots in the Farmington Valley area of Connecticut.

According to his campaign’s website, the Republican candidate’s Marines-focused charity work has helped over $200,000 to be raised in two months.

Now a business consultant in Simsbury, Hyde says election integrity needs to be a central issue in Connecticut. He noted that, as he campaigns, he has grown increasingly aware that Democrats like Blumenthal are actually not that popular in the state.

Hyde is a champion of animal rights as well, and devoted to his dog Thunder, a German Shepherd.