In a chain of internal GCSB emails from August, Johnson complains that the GCCC put on a skit regarding the Metropolitan Atlanta Rapid Transit Authority (MARTA), the public transit system in the city, that “perpetuated deeply rooted stereotypes.” 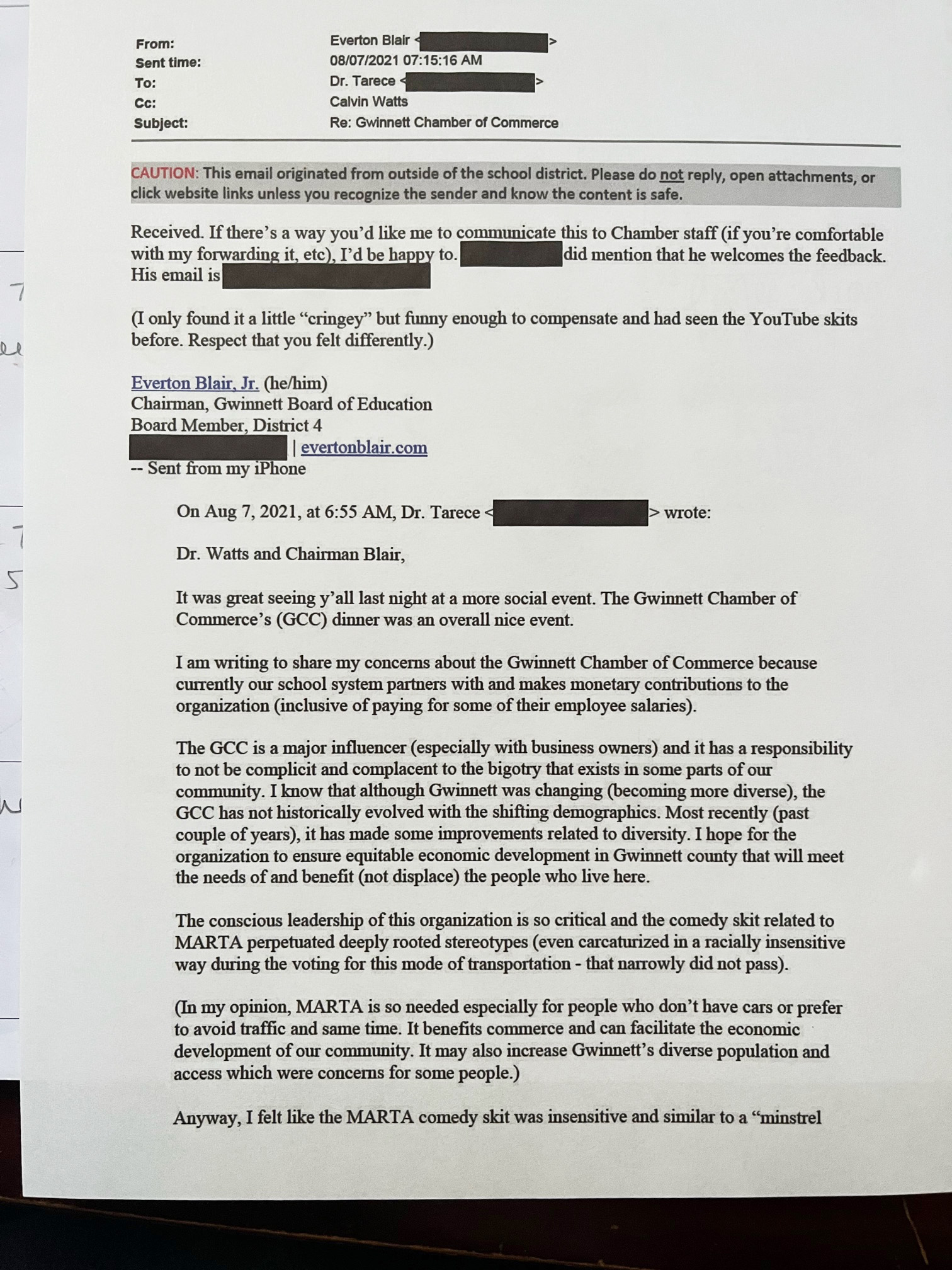 That message was sent to Superintendent Dr. Calvin Watts and school board member Everton Blair.

In a third email, Johnson responds to Blair, saying that she sent a person at the GCCC – whose name is redacted in the message – an email about her concerns, and that “he has what he needs from me.”

She asked Blair to reach out to the unnamed person, who activist Gwinnett County activist Brenda Stewart identified for The Star as GCCC President and CEO Nick Masino, with a list of demands.

That list included GCCC making a statement encouraging its “members and partners to not engage in racism, white supremacy, violence, and hate,” stop members from directing targeted harassment of black and brown leaders (she did not cite examples of such harassment) and create “an anti-hate proclamation” along with “zero-tolerance anti-racism policies, procedures, practices and programs.” 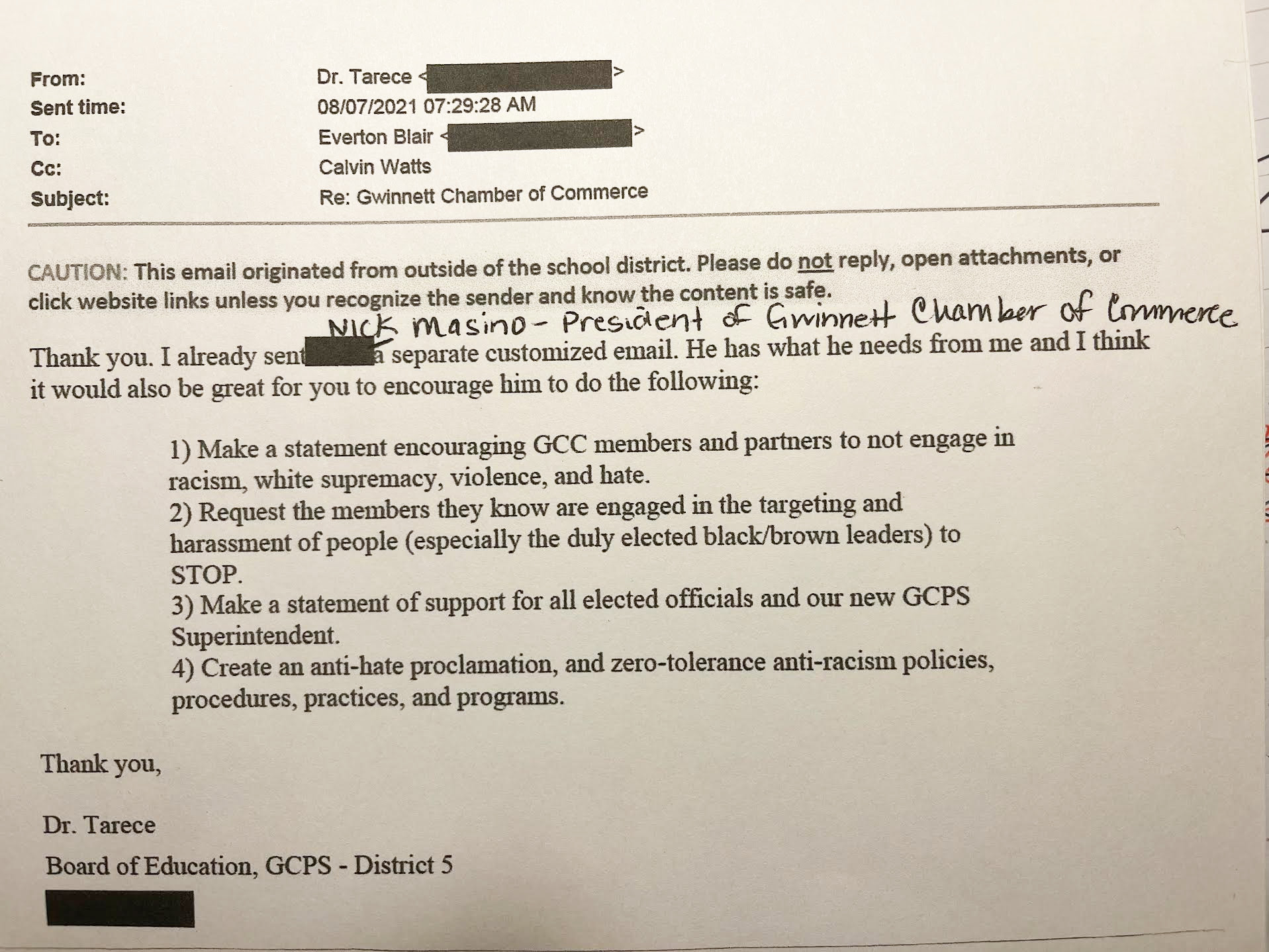 Asked whether the GCCC was following the demands of the GCSB, Masino insisted that the business group was not.

“The answer to your question is emphatically ‘no,’ he said. “Gwinnett County School Board members, Gwinnett County Public Schools Staff members or anyone else for that matter has made demands of me or the Gwinnett Chamber. They are wasting your time with this pollical [sic] rabbit hole and their pollical [sic] squabbles. The Gwinnett Chamber Champions Business and we do not waste our time and resources in such political squabbles.”

But Masino admitted in an email to Stewart, which Stewart provided to The Star, that he and Johnson “spoke immediately following [the complaint] and met in person to discuss her legitimate concerns.”

Masino did not disclose information about that meeting before he was confronted with proof that it occurred. He said in a phone call with The Star that he and Johnson had a pleasant lunch, but insisted that the GCCC was not taking orders from the GCSB.

Gwinnett County Public Schools admits that the GCCC and the district often work together.

“In terms of the clarification you are seeking, the Chamber of Commerce and the school district are two separate entities that both support Gwinnett County,” GCPS Media Director Sloan Roach told The Star Monday. “As a result, we often share information and partner together regarding initiatives, projects, and programs.”

Johnson is a controversial far-left figure.

“Racism is prejudice plus power,” Johnson said in a 2020 video, as reported by The Star. “I’ve also commented before that many white people and black people are impacted by systemic racism. Because we all live in a society that is founded on the oppression of black and brown people, because we live in a society that glorifies whiteness, we are all impacted. Black people are impacted because we internalize this racism, and white people are also impacted because they are socialized racists.”

GCSB has also been marred in controversy for masking and Critical Race Theory (CRT) policies, and for having parents, including Stewart, arrested for protesting at its meetings.

Pete D’Abrosca is a contributor at The Georgia Star News and The Star News Network. Email tips to [email protected].
Photo “Dr. Tarece Johnson” by GCPS_info.