At a recent Leon County School Board meeting, Superintendent Rocky Hanna used a misleading CNN fact-check to publicly criticize Governor DeSantis’ rationale for the Parental Rights in Education bill, while ignoring facts related to a lawsuit filed against the school district.

The CNN fact-check uses selective comments from a DeSantis press conference, related to an incident that took place at a Leon County middle school, to question the rationale for the Parental Rights in Education bill.

The incident involved the failure of school officials to notify parents about a meeting with their daughter concerning gender issues. The parents have filed a federal lawsuit against the Leon County School Board.

Hanna, after reading DeSantis’s comments from the CNN fact-check, said that “none of this happened, none of this is true, it is all fabricated …”

While DeSantis’s comments about the specifics of the incident were partly inaccurate, Hanna ignored facts that were consistent with the comments made by DeSantis.

What Hanna did not reveal in his comments to the school board is that school officials initiated an interview with the student as part of a  “Transgender/Gender Nonconforming Student Support Plan” without including the parents.

In fact, initiating the plan without parent notification was part of the guidance sanctioned by the Leon County School District at the time. When questioned about the interview and support plan, school officials told the students’ parents they were not required to be notified of the intervention based on state law and Leon County School (LCS) guidance.

Why would Hanna leave out these relevant facts?

Hanna, during his comments to the school board, said that because of the lawsuit, Leon County schools had become the “poster child” for the Parental Rights in Education bill. He said it was time to “change the narrative.”

Following the school board meeting, the Leon County School Board officials posted Hanna’s comments on the board’s Facebook page. 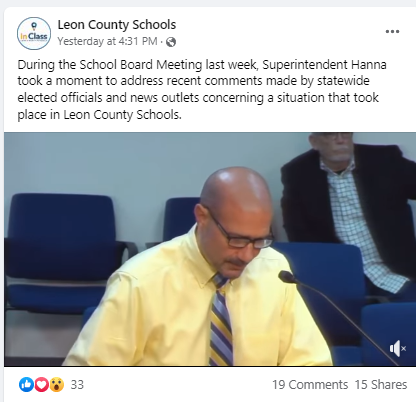 This is not the first time the CNN fact-check has been used to question the need for the Parental Rights in Education bill.

Orlando Sentinel‘s Scott Maxwell tweeted the fact-check on the same day it was published. And Florida House Representative Anna Eskamani – a staunch opponent of the bill – tweeted in reply, “Governor DeSantis lied to promote a bigoted and unnecessary bill? No way!”

It should also be noted that Leon County Superintendent Rocky Hanna verbally changed the school district guidance incorporated in the “Transgender/Gender Nonconforming Student Support Plan” before the Parental Rights in Education bill was signed into law.

Steve Stewart is a senior contributor at The Florida Capital Star. Email tips to [email protected]