The two briefly discussed border security and the importance of law enforcement in securing the border. They then opened the floor for press questions. Governor Lee was asked about several different pieces of legislation, the $500 million bonds proposal for a new stadium for the Titans, and other issues. Lee repeatedly expressed his desire and enthusiasm about working with the General Assembly to resolve issues. 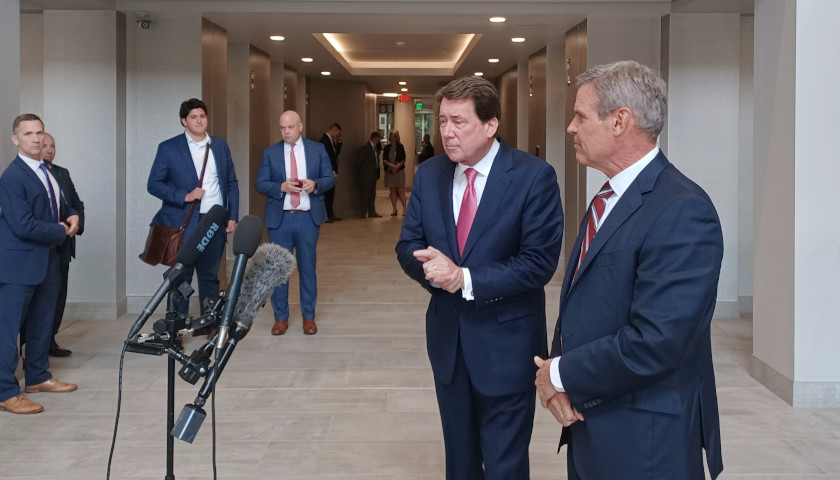 “I was at the evening muster of the border patrol on our southern border the night that leadership there had to advise the night shift that the Biden administration was going to do away with Title 42 – the last tool they have in their tool kit to turn people back at the border,” he said. “There was just a pall of depression that fell over the room that evening as I saw the border patrol officers thinking, ‘What do I have left to work with?'”

“I’ve actually proposed legislation to expand Title 42, to add another health crisis that’s of even greater concern to me than Tuberculosis or COVID – and that’s drug overdoses and deaths right here – that would expand Title 42 to allow them to turn back anything that’s associated with drug smuggling,” said the senator. “A lot of it down there is associated with drug smuggling. I’d rather see Title 42 expanded in that manner than have it retracted by the Biden administration as is the current plan.”

Hagerty said he thinks Democrats in the senate, because of the looming election, may be warming to his way of thinking.

“I think, finally, we’ve got some of my Democrat colleagues looking at this and thinking the same way because they realize that an election is coming in November. They’re going to be held to account on this too,” he said.

“We’ve really got to look at the most important tool that we had in our tool kit and that’s the migrant protection protocols,” Hagerty continued. “What I’d like to do is codify that – what the Biden administration has done is destroy it – but that was the absolute most effective tool.”

“President Trump worked very hard to get that in place. I know the team that negotiated that agreement and it was very hard-fought and it was the most effective tool that we’ve had in terms of stopping illegal immigration into America,” he said. “The Biden administration has stopped that. Courts have ordered them to reimplement it. The Biden administration is defying the court orders. We need to embed it in legislation.”

Hagerty said he wants to see border security as the top priority under a Republican-controlled Congress.

“When we take the Senate back in November, the House as well, I’d like to see us make that priority number one,” he said.

Aaron Gulbransen is a reporter at The Tennessee Star and The Star News Network. Email tips to [email protected]. Follow Aaron on GETTR, Twitter, and Parler.

One Thought to “Senator Hagerty to Tennessee Star on Border Security: Biden Administration Has Destroyed Most Important Tool”