“One of the things about Earth Day that’s so exciting is it reminds everybody how important the earth is, and that it’s our job to take good care of it. And so, in taking good care of it, we’re going to plant a tree, and this tree will actually make it more beautiful, but this tree also does something really interesting. This tree, because it has roots, actually filters water as it runs through the ground,” Glenn Youngkin said. 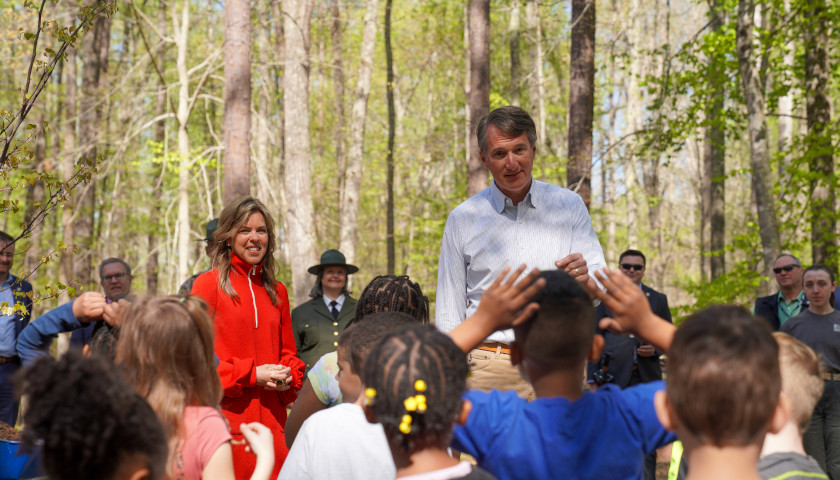 Students were excited (and scared) by a frog and a centipede near the hole for one of the trees. The students shared facts about bluebirds with the governor, including that they can swim.

He said, “I didn’t know that! Bluebirds swim!”

Before planting the trees, Glenn Youngkin told park staff, volunteers, and reporters, “The first lady had a chance yesterday to be on the James River and really have a chance to reflect on the great progress that we’re making in making sure that not just the James River, but all of our waterways are receiving the kind of attention for environmental stewardship that they should, and this is really important.”

He said that growing up he spent time on the Chesapeake Bay, and he’s excited to make progress taking care of Virginia’s waterways.

Both Lynchburg and Richmond have combined sewer overflow systems that send rainwater mixed with sewage into the James River during heavy rainstorms. Additionally, in 2021 a broken sewer main sent 300,000 gallons of raw sewage into the river. Although most bacteria from the human gut breaks down after a few days, nutrients including nitrogen and phosphorus can cause algae blooms and harm water life. The James River flows into the Chesapeake Bay, and wastewater is a significant source of nutrients in the bay, according to the Chesapeake Bay Program.

Glenn Youngkin has previously highlighted a desire to address wastewater problems and protect the Bay, including in a press release announcing his nomination of former EPA Administrator Andrew Wheeler for Secretary of Natural and Historic Resources. During a battle over Wheeler’s confirmation, Democrats questioned a proposal during Wheeler’s tenure to cut EPA funds to the Chesapeake Bay, while Republicans highlighted EPA spending under Wheeler on wastewater and the Bay.

Wheeler was not confirmed as secretary and is now a special advisor to Glenn Youngkin. Wheeler and Acting Secretary of Natural and Historic Resources Travis Voyles were present at the tree planting alongside other administration officials.

Volunteers are helping park staff plant 200 more trees tomorrow. Although there’s no space for more volunteers at that project, Hulth said Pocahontas State Park in Chesterfield is providing cleanup kits to collect park litter, available at the park office between 9 a.m. and 3 p.m. Volunteers can come Saturday from 9 a.m. to 12 p.m. to celebrate Earth Day gardening at the park’s butterfly garden.

State parks across Virginia are hosting volunteer projects and other Earth Day activities on Saturday and Sunday, including a shoreline clean up at Mason Neck State Park in Lorton, a tree planting at Kiptopeke State Park in Cape Charles, and native bush plantings at Staunton River State Park in Scottsburg.

Eric Burk is a reporter at The Virginia Star and The Star News Network. Email tips to [email protected].
Official Photos by Christian Martinez, Office of Governor Glenn Youngkin.

One Thought to “Youngkins and Kindergarteners Plant Trees for Earth Day”