Republicans and many Democrats condemned the tweet by the state Democrat Party that compared Logan, a two-term former state senator who is running against incumbent U.S. Rep. Jahana Hayes (D), a black woman, to the famous mischievous monkey in children’s books, claiming the theme of the tweet concerned Logan’s residency in the 5th district. 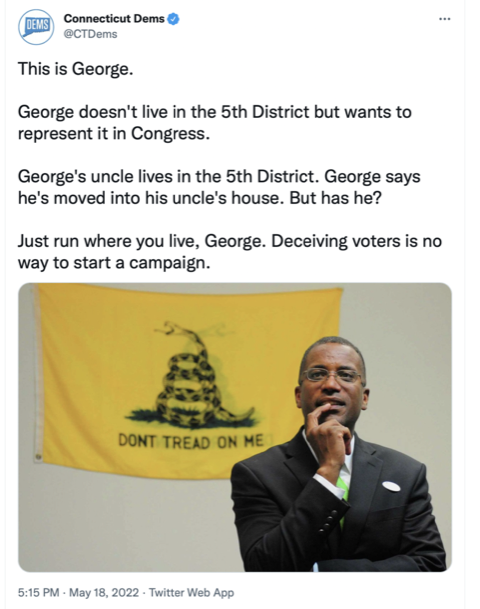 In the Democrats’ tweet published Wednesday, Logan is pictured standing in front of a “Don’t Tread on Me” Gadsden flag.

This is George. George doesn’t live in the 5th District but wants to represent it in Congress. George’s uncle lives in the 5th District. George says he’s moved into his uncle’s house. But has he? Just run where you live, George. Deceiving voters is no way to start a campaign.

Attorney and political columnist for The Hartford Courant Kevin Rennie wrote about the Democrats’ tweet Thursday in a post at his Daily Ructions blog titled “This Is What Racism Looks Like. Democrats Compare George Logan to a Monkey.”

This is What Racism Looks Like. Democrats Compare George Logan to a Monkey. https://t.co/RpW85JqSSj pic.twitter.com/iWgCas5p5k

Republicans are accusing state Democrats of comparing 5th Congressional District nominee George Logan to a monkey: Logan, a two-term former state senator, to Curious George. the famous monkey of the children’s book series. Democrats have made frequent references to where Logan lives. When the congressional reapportionment maps were adopted, Logan moved to Meriden from his home in the 3rd Congressional District.

“What if Republicans had deployed this pernicious device to mock and wound Logan’s opponent, incumbent Jahana Hayes, who is also black?” Rennie asked. “What if they had taunted the 2016 national teacher of the year under the cover of Curious George, ‘You do not belong here. Go back to where you belong.’”

“It would likely not have been the first time Logan and Hayes had had that racist command spewed at them,” he added. “This should be the last.”

Logan recently moved from Ansonia to Meriden, which is in the 5th district. Constitutional qualifications for U.S. House members require they “live in the state they represent (though not necessarily in the same district).”

“George lives in and is registered to vote in Meriden, which is part of the 5th district,” Logan campaign spokesman Paul Amarone said in a statement.

According to a report at the Republican-American, at the start of his congressional campaign last year, Logan announced his intention to sell his home in Ansonia and move into the 5th district.

Logan campaign manager Paul Amarone said the candidate chose not to sell his home at the time because of the volatile housing market.

“They didn’t want to lock anything in to the long term,” Amarone said. “He wants to hold on to what he has.”

Amarone added Logan and his wife Lisa are now living in his uncle’s home in Meriden, while his uncle is in Florida.

The tweet became even more problematic when Hayes herself retweeted it, with the text, “Raise your hand if you live in the 5th,” and Democrats defended it, denying there was any connection between Logan and the cartoon monkey.

As The Connecticut Star reported in March, Hayes intimated to her supporters on a Zoom call that Logan was only in the campaign because of his race.

“There’s this idea that the only reason I got elected is because white liberals felt super sorry and guilty and voted for me, so, just give them any other African American and they’ll vote for this person all the same,” Hayes said to supporters on the call.

Logan responded, according to the report:

It is disheartening to hear these remarks from Congresswoman Hayes, boiling this campaign down to skin color. Perpetuating a narrative that says candidates of color are defined by how they look rather than what they’ve accomplished is dangerous.

The Republican candidate himself commented the state Democrats’ tweet was “racially motivated”:

For a party that claims to be open and inclusive, this sort of tweet, which was also retweeted by my opponent Jahana Hayes, certainly comes off as racially motivated. However, this isn’t the first time Democrats and Jahana Hayes have made racially charged comments or statements in regards to my candidacy.

While Americans are experiencing surging inflation, the highest gas prices in our nation’s history, increase in crime in our communities, and a crisis at our southern border, Democrats would rather play the race card than talk about or solve our issues. I won’t be deterred from addressing the real issues that are negatively impacting the residents of the 5th district.

See my statement below in regards to the @CTDems racially motivated tweet. #ctpolitics #CT05 pic.twitter.com/kmrSw2TBJH

Republican State Party Chairman Ben Proto observed if the GOP had “put that out about Jahana Hayes, we would be called racists.”

“At best it’s racially insensitive,” he added, reported CT Insider. “At worst it’s a racist tweet. There are a lot of legitimate political issues they could bring up. But stooping to this level is despicable and has no place in political discourse.”

“Connecticut Democrats, using a popular meme featuring Dick and Jane and stick figures, called out George Logan for not living in the 5th Congressional District where he is seeking office,” the Democrats justified the tweet in a statement, according to CT Insider. “George Logan still does not live in the 5th District.”

“It doesn’t matter how it was meant,” Proto asserted. “They’re clearly attempting to tie the book into the tweet. I’m pretty sure if a Republican posted that about Jahana Hayes, we would be called racially insensitive.”

On Friday evening, Connecticut Democrats finally deleted the tweet, still insisting, however, the post has been “misrepresented.”

The CT Dems post about George Logan not living in the 5th District where he is running was based on the “This is Bill” meme.

We did *not* make any comparison to Curious George.

However, our post has been misrepresented and is causing offense. For that, we’re sorry. It’s deleted

The Connecticut Republicans have no opinion about actual racism in their ranks; about demanding that schools stop teaching the history of slavery, about the murderous violence incited by the persistent discussion of replacement theory. But they are finding racism where there is none. We suggest the CT GOP get online and look up memes with stick people, and that George Logan live in the district where he’s running for office.

I find it hard to believe anyone, acting in good faith, could interpret my re-tweet as stoking racial animus against another African American. That does not benefit me, my campaign or this district in any way. I do not participate in that kind of behavior and never have.

“I do however, understand perception and my opponent being offended is good enough for me,” she said. “I apologize and will delete the tweet.”

🧵I do however, understand perception and my opponent being offended is good enough for me.

Republicans and Democrats alike called out the tweet as “racist,” “racially insensitive,” and “absolutely unacceptable.”

I just became aware of a deeply problematic tweet, posted by my party, CT Dems. Had the GOP posted it, we’d be condemning it. So let’s do that here: intent matters little, whataboutism is not ok, the purported substance doesn’t matter. Let’s take it down, apologize and learn.

I just became aware of a deeply problematic tweet, posted by my party, @CTDems. Had the GOP posted it, we’d be condemning it. So let’s do that here: intent matters little, whataboutism is not ok, the purported substance doesn’t matter. Let’s take it down, apologize and learn.

This is absolutely unacceptable! Doesn’t matter which party did it. The historical context makes this nothing less than vile. Period. The deflecting in the press release to what the Republicans do and don’t do in their ranks only makes it worse. https://t.co/H44mH7u7bF

However, a Black Lives Matter group defended the Connecticut Democrats’ tweet as a simple “meme.”

We are gonna go ahead and say @GSLoganCT lied, the @CTGOP lied and @DailyRuctions (in good faith) published a story from the lies he was told by both.

The meme published by @CTDems was in the “Be like Bob” meme format.

Show some backbone on both sides. pic.twitter.com/44z9TCCo9m

Connecticut Republicans also queried about why Governor Ned Lamont (D) had not condemned the tweet by his state party.

Where is @GovNedLamont's condemnation of his own party's offensive tweet?

On Friday as well, Patrick Sasser, founder of the grassroots “No Tolls CT” group that battled Lamont in his attempt to place tolls on Connecticut roads, called on the governor to comment on his party’s controversial tweet.

Will we see a comment from the head of Democrat Party @GovNedLamont ? How has he remained silent on this? https://t.co/GHXo04OEDv