RICHMOND, Virginia — Delegate Don Scott Jr. (D-Portsmouth) is the new Democratic leader/minority leader in the Virginia House of Delegates, elected on Wednesday morning. Scott had pushed to oust then-Minority Leader Eileen Filler-Corn, who was voted out at the end of April, but at that time the caucus opted to delay a vote on a new leader to allow time for other candidates to campaign. 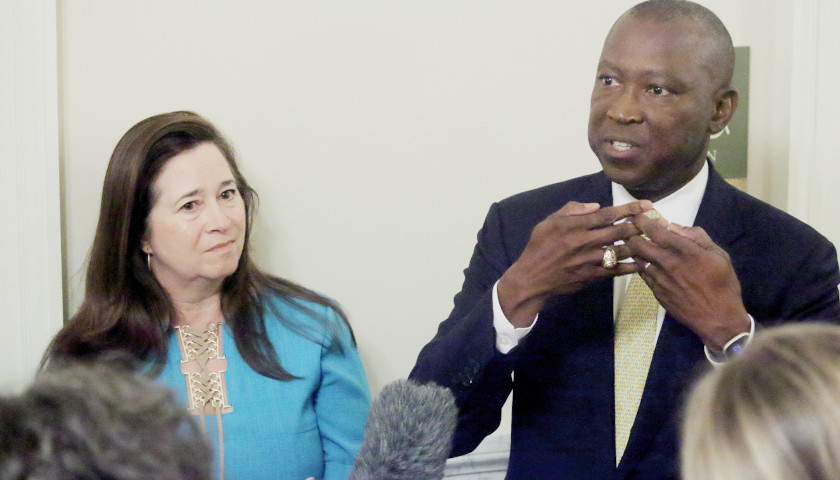 “I’ve come through some adversity in life and I’ve been able to overcome it and I’ve done very well for myself,” Scott told reporters after the results were announced. “But I feel like you have a responsibility, once you’ve done very well for yourself and you know the challenges that other people are facing, you have a responsibility to look back and see if you can pay it forward, and that is why I chose to do this. Not because there’s something in it for me. I’m doing very well. I could go home, turn on my Samsung, I’ve got the TV – COVID made me get the TV room just perfect, I’ve got the recliner just right – I could easily go home and relax. But there are too many people that are hurting.”

After Scott’s win was announced, but before Scott was available to speak, Simon told reporters that he wasn’t sure if he would be appointed to continue as parliamentarian, a position where Simon has often sparred with Speaker of the House Todd Gilbert (R-Shenandoah) and other Republicans.

“I think that everybody’s really excited to look forward now and move forward with the right energy to take back the majority,” Simon said. “People think that Don obviously is our best chance to do that.”

In 1994, Scott was arrested and served seven years for drug dealing-related offenses, although in a 2018 tell-all to The Virginian-Pilot Scott said his involvement was limited to agreeing to go to Alabama to pick up money for a drug dealer, telling The Pilot, “I never saw drugs.”

In that article, Scott described a botched defense that left him stuck with the mandatory minimum, and said that the experience showed him some of the problems within the legal system.

Scott’s background has been brought up by Republicans and was highlighted on progressive forum Daily Kos in an anonymous article submitted by a community member.

Shortly after Governor Glenn Youngkin took office he instituted a tip line for “parents to send us any instances where they feel that their fundamental rights are being violated, where their children are not being respected, where there are inherently divisive practices in their schools.”

That and Republicans’ broader approach triggered criticism in the House of Delegates from Simon and others, including Scott, who questioned Youngkin’s Christianity in a January speech.

“So far, what I’ve seen from his day one activities is not someone who is a man of faith, not a Christian, but someone who wants to divide the commonwealth, someone that wants to cause division in this commonwealth. I know the truth hurts, I don’t want to say Critical Race Theory because I know it hurts your feelings,” Scott said.

That prompted Youngkin to make a much-publicized trip to meet Scott at Scott’s office the same day. At the time, a source didn’t share details of the conversation but said Youngkin and Scott had a good conversation and agreed to disagree without being disagreeable.

In his remarks to reporters Wednesday, Scott said, “There are too many people that need us, and when we don’t do the things that we promised to do, then real people hurt. So while the governor and Republicans want to celebrate that people are suffering right now, they want to use it as a political talking point, about inflation and other issues, we want to figure out how do we solve the problems that Virginians are facing. How do we solve the issues of the day that we are facing? We don’t want to fight the culture wars. We don’t want to deal with CRT and all that stuff. We want to deal with how to protect a family’s right to choose whether to have an abortion or not. How do we make sure that we protect our children in schools?”