Evidence points to the Madison County Republican mayoral nominee pursuing and receiving votes from Democrats and Independents in the Republican Party primary held on May 3.

A.J. Massey, in a three-way race, won the Republican primary for Madison County mayor with just over 50 percent of the nearly 10,000 votes cast in the primary that saw 19 percent turnout, according to Madison County’s election results.

Massey appears to have flouted Tennessee law by encouraging crossover from Democrats and Independents to vote for him.

The response continued, “No matter who you have voted for in the past, anyone can ask for this ballot.” 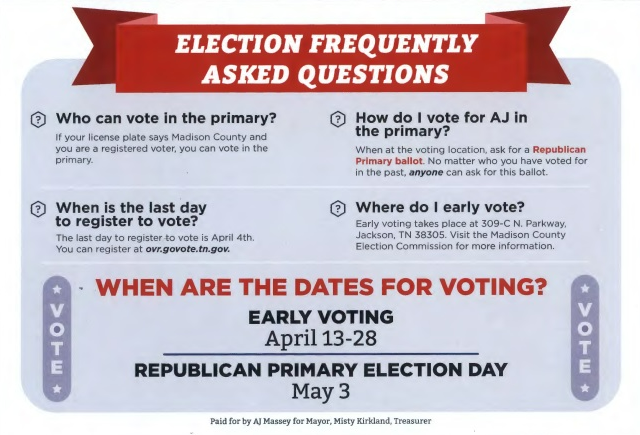 Meanwhile, state law is very clear that a primary voter is to be faithful to the party on the ballot they requested.

In a meeting of the Madison County Republican women, Massey directly addressed a concern expressed by an attendee about him encouraging non-Republicans to vote for him in the primary by confirming that is what he did with his campaign mailer.

“I’m asking for people who want me to be county mayor to vote for me. That’s what I’m asking for,” Massey is seen saying in a video posted by the Madison County-based 501(c) (4) Tennesseans for Liberty, which distributed a mailer pointing out Massey’s appeal to Democrats through his policy positions and requests for votes.

The organization’s chairman, Adrian Eddleman, who appeared on The Star News Report last week, questioned whether it was coincidental or if there was an organized effort by the Democratic party to crossover-vote within the Republican party.

Two prominent Democrats in the area openly discussed that they voted in the Republican primary, while simultaneously acknowledging they knew it violated state law. Doing so, especially as voting was still underway, may have encouraged other non-Republicans to participate in the party’s primary.

Self-described progressive Gabe Hart, who writes a monthly column in The Jackson Sun and believes that local government should not be aligned with either political party, publicly declared that for the first time since 2000 he voted for a Republican during early voting in the May primary. In a Facebook post, responding to a mailer by Tennesseans for Liberty exposing Massey, Hart said he supported Massey.

The publication’s editor, Brandon Shields, acknowledged in the title of an opinion piece that he planned to violate state law by voting in the Republican primary, with the justification that it goes against his basic voting rights simply because he has no desire to commit to a party and its entire platform.

A native West Tennessean, Massey served on the Jackson-Madison County School Board since 2018 and had a 17-year career in banking before deciding to end it in January to pursue the mayoral seat, he told The Tennessee Star Report before the May 3 primary.

At the time of his appearance on the radio show, Massey controversially said that as a school board member he would be voting against a Hillsdale College outreach program devoted to the revitalization of K-12 public education called the Barney Charter School Initiative, even though school choice is a major tenet of the Republican party platform, is being pursued by Tennessee’s Republican Governor Bill Lee, and, in the four years Massey was on the school board, the district made what he called “marked improvement” by going from a grade F to an F+.