On March 31, 2022, an Ohio Appeals Court upheld a lower court verdict against Oberlin College awarding  $31.2 million to a local bakery on the grounds that, among other things, the College and its Dean of Students defamed the business.

There has been much reporting about the incident that sparked the lawsuit against Oberlin and the potential negative impact of the court’s decision on the rights of students to engage in free speech and protest.

Unfortunately, this reporting has often emphasized the alleged racial aspects of the case, at the expense of focusing on Oberlin’s conduct and the culpability of its administration.  Important lessons can be learned from Oberlin’s missteps, lessons that every college administrator should heed lest they too want to be on the wrong end of a similar verdict.

The lawsuit arose out of an incident at Gibson’s Bakery, a family-run bakery and convenience store located in Oberlin, Ohio.  At the time of the incident, the bakery had been in operation for over 130 years and had a long-standing business relationship with the College.

On November 9, 2016, a White store clerk confronted a Black male Oberlin student who attempted to use a fake ID and steal wine.  An altercation ensued after the clerk tried to detain the student and police were called.  When police arrived, they observed the clerk on the ground being punched and kicked by several individuals.  The male student was arrested and charged with robbery, while two Black female students who accompanied him were charged with assault.

Although nine months later the students pleaded guilty to attempted theft and aggravated trespass and acknowledged that the Bakery’s actions were not racially motivated, the day following the incident hundreds of protesters demonstrated outside of the bakery claiming the store’s clerk had engaged in racial profiling and assaulted the Black students. 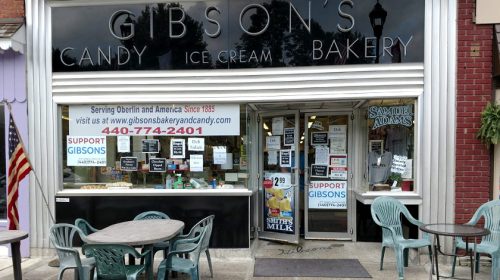 Several college administrators attended the protest, notably the Dean of Students, Meredith Raimondo, and the Assistant Director of Student Outreach and Success, Julio Reyes.  The College claimed that Dean Raimondo was there to “ensure that students’ freedom of speech was protected and that the student demonstrations were safe and lawful.”

At the protest a flyer was circulated labelling the bakery a “racist establishment” with “a long account of racial profiling and discrimination.”  The College made copies of the flyer and both Raimondo and Reyes were seen passing them out to students to distribute, with the Dean handing a flyer directly to a local newspaper reporter. Raimondo and Reyes also attempted to block the reporter and others from taking pictures of the protesters.

A Black employee of Gibson’s reported that Dean Raimondo appeared to be “orchestrating” some of the protests.

The College’s Student Senate passed a Senate Resolution calling on students to boycott the bakery and demanding that the College condemn its history of racial profiling and discriminatory treatment of students and residents of color.

The resolution was emailed to all students, the College’s President, Dean Raimondo, who served as the Student Senate’s advisor and posted in a display case in the College’s Student Center.

Oberlin’s President issued a statement indicating that he was “deeply troubled” by the incident and skeptical of official reports that the Black students instigated the incident.  The President complimented the Student Senate for its “leadership” in the wake of the students’ arrests, implying that he agreed with the Senate’s claim that Gibson’s was a racist establishment and endorsed its call for a boycott.

Provoked by the protests, Oberlin cut off doing business with Gibson’s, which claimed a 50% drop in its overall business following the protests.

In order to determine whether the College defamed the bakery, the court considered whether Oberlin “disseminated false, written statements of fact that caused the Gibsons significant harm.”  The court limited its review to the protest flyer and the Senate Resolution.

Throughout the legal proceedings, Oberlin claimed that both the flyer and the resolution contained nothing more than mere opinions (i.e.; the bakery is racist), which are constitutionally protected speech.

Despite Oberlin’s arguments to the contrary, the court determined that both the flyer and the Senate Resolution were not constitutionally protected opinion, but rather were false statements of fact.

For the record, Oberlin tried to exclude at trial police records from 2011-2016, which contradicted the racist narrative and definitively showed that Whites, not Blacks, were far more likely to be arrested for shoplifting at the bakery.

Next, the court considered to what extent, if any, the College disseminated or published the false statements of fact.  A defamatory statement is published if it is communicated to any third party.  Under Ohio law, any person who “aids or abets another to publish defamatory matter is liable as well as the publisher.”

Although it was not determined who created the flyer, the court concluded that the College either directly published the flyer or aided in its publication based principally on the actions of Dean Raimondo.

While the evidence was less clear that the College published the Senate Resolution, the court did conclude that Oberlin aided in its publication by “providing the student senate with the means and authority to create and send the Senate Resolution to the entire student body via email and post it in a prominent display case in the student union to be seen by current and potential students.”

By refusing Gibsons’ pleas to stop the publication of the Senate Resolution “by removing the resolution from the display case, sending a message to the student body, and/or otherwise calling upon the student senate to retract and/or correct their defamatory statements,” the court concluded that Oberlin aided in the continued publication of the resolution because it “intentionally and unreasonably fail[ed] to remove defamatory matter” that it knew was exhibited on its property.

Raimondo’s credibility was seriously challenged when she claimed that she was unaware that the Senate Resolution had been posted on campus for almost a year even though she was the group’s advisor, knew the location of the display case, knew that the case was used exclusively for Senate announcements, and her office was located in close proximity to the case.

Ultimately, the court awarded Gibson’s $31.2 million for the damage it suffered to its business and reputation due to the College’s aiding in the publication of the false racist narrative.

In the aftermath of the court’s ruling, there has been much hand-wringing and conjecture that the decision will have a chilling effect on students’ rights of free expression and protest.

To be clear, this case was never about the free speech rights of students.   Indeed, to address this misconception, the court clarified that the students’ chants and verbal protests, including labeling Gibson’s as racist, were protected speech under the First Amendment and not actionable in the case.

Rather, the court focused solely on the separate conduct of Oberlin and its Dean of Students in reaching its decision that Gibson’s had been defamed.

First, following the incident, the College could have taken a number of reasonable and legitimate steps toward determining the truth, while supporting its students, including raising serious concerns over the arrests, limiting its role at the protests to maintaining order and safety, hosting listening sessions to allow students to vent their anger, demanding a full accounting from local police, and/or conducting its own internal investigation. It is unlikely that these actions would be characterized as publishing, or aiding in publishing, defamatory statements against the bakery.

Instead, the College crossed the line between legitimate action and defamatory territory when it actively engaged in the protests, copied and handed out flyers, blocked efforts to photograph protestors, refused to repudiate the Senate Resolution’s racist claims, failed to remove the resolution from College property, and implicitly agreed publicly with the Senate labeling Gibson’s a racist establishment and supporting its call for a boycott.  These actions by the College perpetuated the false racist narrative and had a direct and damaging effect on the bakery’s business and reputation, separate and distinct from the independent actions of students.

Second, putting aside the question as to why Oberlin would have continued a business relationship with Gibson’s if it had a history of racial animus toward students of color, had Oberlin engaged in even the most basic investigation it would have determined that the racist narrative was unfounded.

Rather, instead of seeking to verify the accusations, Oberlin doubled down and actively aided in the publication of the false narrative against Gibson’s and even went as far as attempting to block the admission of police reports that clearly contradicted that narrative.

Third, the College chose to pacify and coddle its students in the wake of the protests rather than repudiate their false allegations against Gibson’s. This is evident from its decision to terminate its business with Gibson’s to avoid a food tantrum by students in the cafeteria, its refusal to address its students’ predatory shoplifting practices on local businesses, and its reported efforts to get Gibson’s to drop the charges against the students in exchange for resuming its business with the bakery.

Fourth, the verdict against the College was no doubt influenced by the raw hostility expressed by many of Oberlin’s administrators against the bakery, which they foolishly memorialized in numerous emails and texts.

Notably, an interim assistant dean described the criminal conviction of the three students as “an egregious process” and hoped the College would “rain fire and brimstone” on the bakery.  In response to a published letter from a retired Oberlin professor criticizing Oberlin’s handling of the situation, Dean Raimondo texted, “F-him.   I’d say unleash the students if I wasn’t convinced this needs to be put behind us.”

While some continue to inaccurately attribute Oberlin’s liability to the independent actions of students and lament the chilling effect this decision will have on free speech, this view only clouds the fact that the College and Dean Raimondo were held liable for their own conduct in aiding and abetting the publication of defamatory documents.  Oberlin’s gross mishandling of this matter is a blueprint for disaster and should be viewed as a cautionary tale by all administrators.

Ken Tashjy served as General Counsel for the Massachusetts Community College System for over 21 years and currently serves as a higher education attorney and consultant. He has taught as an adjunct instructor at Suffolk University since 2008, and previously at Brandeis University as a Guberman Teaching Fellow.
Photo “Oberlin College” by Oberlin College and “Gibson’s Bakery” is by Gisbson’s Bakery.

One Thought to “Commentary: Oberlin Learns a $31 Million Lesson for Falsely Accusing a Local Family Business of Racism”