Michigan Attorney General Dana Nessel advocated for “a drag queen for every school” while speaking at the Michigan Department of Civil Rights 2022 Civil Rights Summit, according to multiple sources.

Two different reporters, Craig Mauger for The Detroit News and Barbara Bellinger for Michigan Information and Research Service, noted the comments by one of the state’s top officials.

“‘Drag queens make everything better. Drag queens are fun,’ Michigan Attorney General Dana Nessel says at a civil rights conference in Lansing while speaking out against what she describes as efforts to divide people. ‘A drag queen for every school,’ she adds,” a tweet from Mauger detailed. 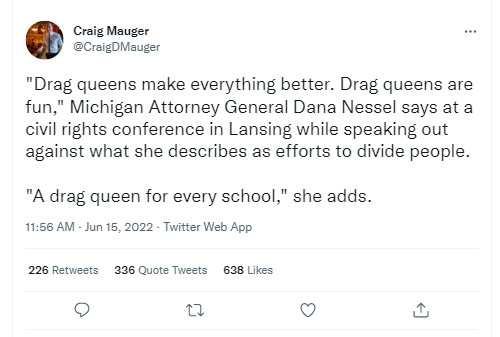 “Drag queens. Okay, let me say this, drag queens, not only do they not end up hurting our kids, drag queens make everything better. Drag queens are entertainment,” Nessel reportedly said.

"Drag queens. Okay, let me say this, drag queens, not only do they not end up hurting our kids, drag queens make everything better. Drag queens are entertainment." @MIAttyGen @dananessel @MiCivilRights #2022CivilRightsSummit @MIRSnews #Lansing #Michigan

Following the comments, some organizations slammed Nessel for the remarks. Michigan Rising Action, a conservative advocacy group in the state, argued the law-enforcement figure should not be focused on the issue.

“Dana Nessel has the wrong priorities. Instead of supporting students that have failing test scores due to COVID lockdowns, she wants ‘a drag queen for every school’ in Michigan,” said Eric Ventimiglia, Executive Director for Michigan Rising Action. “Bringing drag queens to schools is not a solution to the many students that suffer from low test scores and low reading levels.”

At the same time, testing has demonstrated that students in Michigan schools are not academically progressing following the lockdowns of the coronavirus pandemic. One study from the Education Policy Innovation Collaborative (EPIC) at Michigan State University showed that one in four elementary and middle school students did not improve academically from the previous year.

Cooper Moran is a reporter for The Michigan Star and The Star News Network. Email tips to [email protected]