A University of South Carolina (USC) business school “diversity” program that appears to have accepted students of all races – except white – received the attention of one of the U.S. Civil Rights Commissioners, who wrote to inform the school’s interim president such racially exclusionary policies violate both the Civil Rights Act of 1964 and the U.S. Constitution.

Speaking for himself, and not the entire U.S. Commission on Civil Rights, Peter Kirsanow wrote Thursday to Harris Pastides, USC interim president, about the Business Success Academy at the school’s Darla Moore School of Business.

In the letter to Pastides obtained by The Star News Network, Kirsanow referred to a report in May at Campus Reform that observed the Moore Business Success Academy’s three-day workshop “is not accepting applications from White students.”

Since the media report last month, however, the link to the program now shows the application form has been “deactivated.”’

Campus Reform, a project of the Leadership Institute that self-describes as “a conservative watchdog to the nation’s higher education system,” reported obtaining an email from the Moore School of Business Office of Diversity and Inclusion “that stipulates the same race-based prohibition as the online application”: 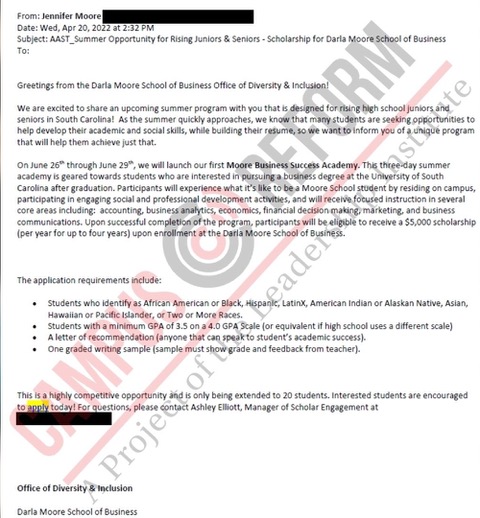 The email names the student racial backgrounds that are acceptable for application to the program, describes the program as offering “social and professional development activities,” “focused instruction in several core areas” of business, and mentions participant eligibility to receive scholarship funds.

“The application also asks students to ‘Please select all dimensions of diversity with which you are comfortable self-identifying,’” Campus Reform reported and listed the following categories:

The link, however, takes visitors to the Moore School of Business page where there now appears to be no mention of the Business Success Academy, as noted by Kirsanow, who continued to Pastides:

I had hoped that the University of South Carolina would announce a change in the Business Success Academy admissions policy after the racially exclusionary policy became public. Unfortunately, I have been unable to find a public statement from the university addressing this concern. It appears that the Business Success Academy has been scrubbed from the School of Business’s website. Thus it is impossible to know whether the program has been discontinued or has merely been removed from the website and will recruit future students through less-public means.

Kirsanow reminded Pastides the University of South Carolina “is subject to Title VI of the Civil Rights Act of 1964.”

“Title VI provides, ‘no person in the United States shall, on the ground of race, color, or national origin, be excluded from participation in, be denied the benefits of, or be subject to discrimination under any program or activity receiving Federal financial assistance,” the commissioner noted.

“Educational institutions that receive federal funding cannot discriminate against students of any race, including white students,” Kirsanow emphasized. “In fact, ‘entire entities receiving federal funds – whether governmental entities, school systems, or universities – must comply with Title VI, rather than just the particular program or activity that actually received the funds.’”

Additionally, the commissioner reminded the interim president the university is a public institution and, as such, is a “state actor and must act in accordance with the Equal Protection Clause of the Fourteenth Amendment.”

The university must show, Kirsanow asserted, “present effects of past discrimination against each of those discrete groups” mentioned in the application and email, and, unless it does so, “it is violating the Constitution.”

“A mere racial disproportionality or past discrimination is insufficient to make the Business Success Academy constitutionally permissible,” he emphasized.

“I urge you to direct the School of Business to cease violating Title VI and the Constitution and immediately restart the application process in a race-blind manner,” Kirsanow concluded.

The Star News Network reached out to the School of Business Office of Diversity and Inclusion for a statement on the status of the Business Success Academy, whether it still exists, and, if so, whether white students are still excluded, per the report at Campus Reform.

To date, no response has been received.