NASHVILLE, Tennessee – A group of off-duty National Guard members and supporters were led by Captain Mickey Shelton and State Representative Jerry Sexton (R-Grainger) in delivering a letter to Governor Bill Lee’s office imploring him to take meaningful action to save the jobs of guardsmen who are about to be fired for refusing the COVID-19 vaccine after the “Guard Freedom” event that was held at Legislative Plaza midday on Wednesday.

Lee was absent from his office and after a few moments, Shelton and Sexton were able to present the letter to Ben Silverman, who is Lee’s personal aide. 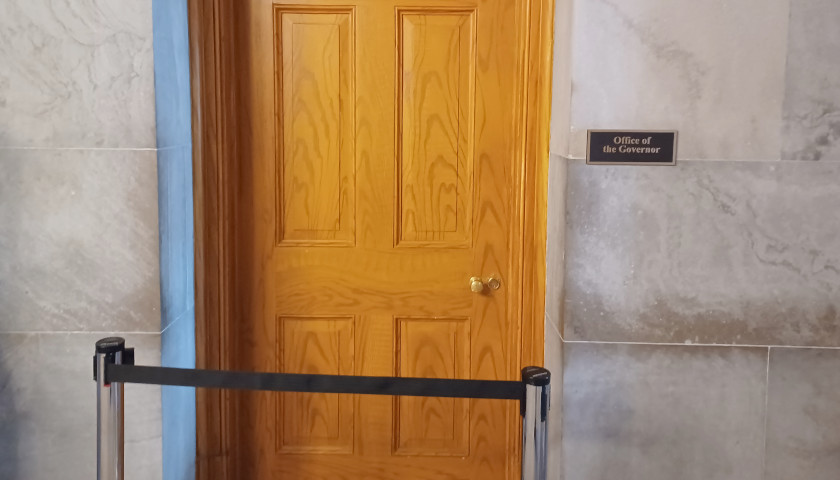 During the exchange, a partition and a female state trooper separated the pair and the 30 or so supporters from Lee’s aide.

“We wanted to give Governor Lee this letter, in regards to each one of these things and what he can do about it. We invited him to our event. I don’t know what prior engagement he had but I was sad not to see him there. I’m sure there was something more important that he couldn’t be there,” Shelton said as he handed Silverman the letter.

Sexton then asked Lee’s aide to inform the governor that several legislators are requested a special session be called in order to address the issue of the National Guard firings.

“On behalf of some of the legislators, we are asking him to consider a special session to look into this matter,” Sexton said.

“Do you know when the governor will be back?” he then asked the aide.

“Maybe he could set a time in the next few days to meet with some of us,” Sexton suggested.

Shelton and Sexton then asked the aide for his card, who then provided both with his contact information.

“I spoke a while back with, I think, Joseph Williams trying to get a meeting. Two weeks went by. He’s just too busy. I get that and I understand the grind – too busy,” Shelton said.

“We could discuss some of the options that we have to look at this. I know the governor’s limited, but we can do something. There must be something,” added Sexton.

After that exchange, the group peacefully and respectfully left the Capitol grounds.

With the exception of the one aide, Lee’s office appeared empty.

The letter can be viewed below: