NASHVILLE, Tennessee – Tennessee National Guard soldiers and several state legislators held a “Guard Freedom” event at Legislative Plaza right in front of the state capitol asking Governor Bill Lee to intervene on behalf of the soldiers who are about to lose their jobs over noncompliance with a COVID-19 mandate. 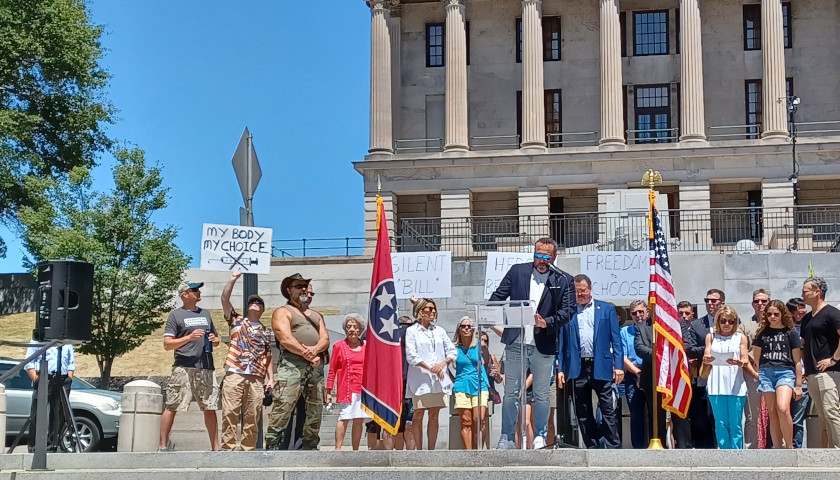 The National Guard soldiers who spoke and attended the event were off duty and spoke as private citizens, not on behalf of any government entity. Their ranks were stated for identification purposes only.

Captain Mickey Shelton, who has been unofficially speaking for his fellow soldiers that are soon to be unemployed unless the governor acts, said in part, “I think we’re asking ourselves, what now? Reagan had said that it’s not the federal government that creates states, it is states that created the federal government. Where has our state sovereignty gone? So with that said, we have three requests.”

Shelton then listed those requests.

“The first request of the governor: publicly condemn the firings of the National Guard members who are scheduled to be terminated due to the refusal of the COVID-19 vaccine and pledge to do everything in your power to help those members,” he said. “Two, immediately order Major General Holmes to halt the discharge of these honorable men and women.”

“Three, ask Attorney General Herb Slatery to file suit on behalf of the Tennessee National Guard members and coordinate with other state AGs to file an emergency injunction against the Department of Defense, forcing them to reverse adverse actions against any National Guardsman for refusal to vaccinate,” added the captain.

In addition to Shelton, other guardsmen who spoke included Captain Donald Eli and Major Clint Cannon.

State Representative Terri Lynn Weaver (R-Lancaster) sang the national anthem and spoke as well, challenging Lee and Slatery to take action to help the soldiers who are about to lose their jobs.

“We are here today to ask our governor to draw a line in the sand. We are asking him and the attorney general to be the defense of the people and to stand up for the people who we are here standing with – who would stand with us in civil unrest, in natural disasters – would be there and show up on the job,” Weaver said. 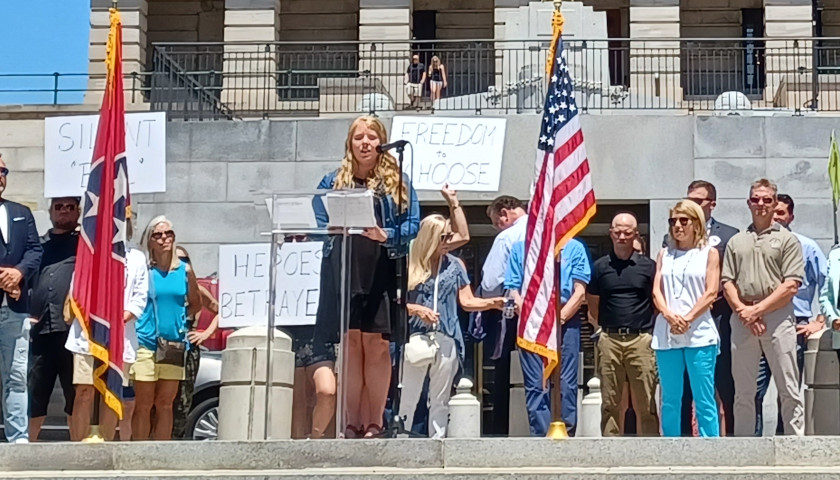 “Governor, I ask you to step up to the plate. One has to wonder, what is the gig here?” she added.

“Do the right thing, Governor Lee. We’re counting on you,” Weaver said.

The other members of the General Assembly who presented speeches of support for the guardsmen included State Representatives John Ragan, Jerry Sexton, Justin Lafferty, David Byrd, and Chris Todd.

State Senator Janice Bowling (R-Tullahoma) gave a fiery speech. “When a person tries to give mandates to the people, that is called tyranny, not the Republic of the United States of America. The truth will set you free and we need to call it what it is,” she said.

“In the Tenth Amendment, we hold all of the things to us that are not expressly given to the federal government. Nobody in America, even the FDA rule and the Nuremburg Code, can force an American citizen to take an experimental shot through coercion. It is basically fundamentally a crime to do that,” Bowling added.

State Senator Mark Pody (R-Lebanon) was in attendance to support the guardsmen but humbly didn’t ask to speak. He attended to show the guardsmen his support.

Pastor Doug Robertson, the executive minister of Harpeth Christian Church, kicked things off with a prayer. Chad Randall, the president of the Tennessee Republican Assembly, graciously provided audio equipment and a podium.

The master of ceremonies for the event was Mission America Foundation Chairman Aaron Spradlin.

Spradlin said at the beginning of the event, “We are here to urge Governor Bill Lee to stand in the gap between the overreaching federal government and the loyalty and commitment of our warriors who swore to protect and defend the very Constitution that is being infringed upon – stealing their rights and attempting to end their service to our great nation by stealing their right to choose.”

The National Guard members received a letter in May, which said in part, “Unless otherwise fully exempted in accordance with Department of the Army policy, all members of the National Guard must be fully vaccinated by 30 June 2022.”