The vote of five members of the City of Hendersonville Board of Mayor and Aldermen (BOMA) halted a ballot initiative that would allow residents to vote on term limits for the city aldermen and mayor.

The vote on Ordinance 2202-09 relative to term limits for members of the board of mayor and aldermen, which was up for a second reading on Tuesday, June 28, and required a two-thirds majority to pass, failed after receiving just eight of the necessary nine positive votes. 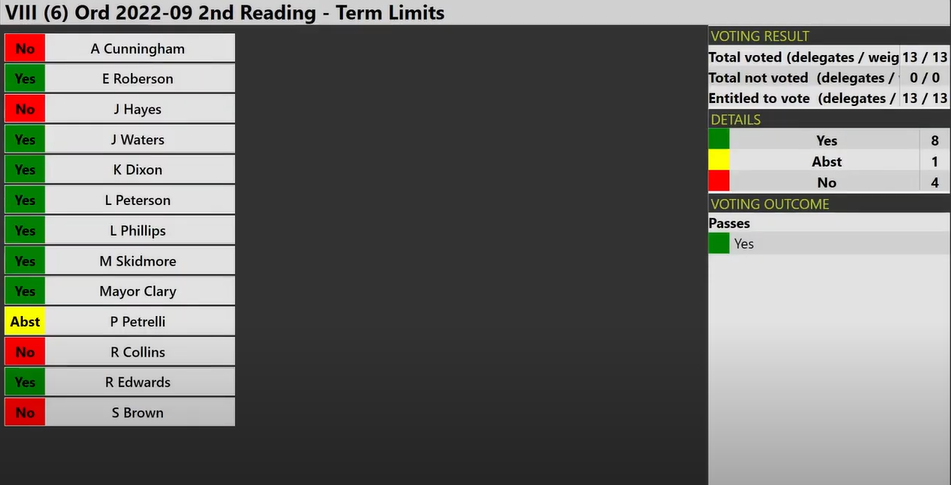 The resolution specifies that the number of terms served by the mayor and aldermen shall not exceed three terms for the mayor or an alderman and will only apply following the next election after the ordinance is operative.

For the ordinance to be operative, it has to be approved by two-thirds of the members of the board and approved by the voters of the city through a referendum.

The ability to put a referendum on term limits to the voters of Hendersonville is permitted through a bill sponsored by State Senator Ferrell Haile (R-Gallatin) and Representative Johnny Garrett (R-Goodlettsville) that was codified as Public Chapter No. 741 to amend state law T.C.A. 6-3-110.

The new provision, addressing a municipality having a board of mayor and aldermen charter and a population of 60,000 or more according to the 2020 federal census, effectively limits the applicability to only the City of Hendersonville.

Due to the legislative history of the ordinance, its failure was unexpected.

First, the appeal to the Tennessee General Assembly for the state law to be changed had to be approved by a two-thirds majority of the Hendersonville BOMA, which it did earlier this year despite an attempt that failed as recently as three years ago, when former Alderman Darrel Woodcock proposed term limits in 2019.

Once the law became effective on March 24, the Hendersonville BOMA had to then take up the term-limit ordinance through committee, which it did with a positive recommendation on May 10.

The first of the two required readings of the term-limit ordinance passed with a unanimous “yes” vote by all BOMA members on May 24.

On the date of the second scheduled reading, held on June 14, several amendments were proposed, including a change from three consecutive terms to two. The same five aldermen who later voted against or abstained from the term-limits ordinance vote on June 28 were the only ones who voted in favor of the two-term versus three-term amendment, which caused it to fail.

Another amendment to add a section that asked the Sumner County Election Commission to conduct the referendum in conjunction with the November 2022 general election passed unanimously by the 11 BOMA members who were present.

Also, the Hendersonville BOMA decided unanimously to defer the second reading until June 28 to allow the city attorney, John R. Bradley, time to discuss the possibility of having both a two-term and three-term option appear on the ballot.

Bradley reported at the June 28 meeting that the State Election Commission and the county election coordinator advised against trying to have any sort of a multiple question. According to Bradley, they said it was best for the board to decide what term limit they want, whatever the number might be.

That way, “Voters can decide on a specific idea not on the alternative, because elections just don’t typically work that way,” Bradley claimed.

Waters and Roberson spent several minutes speaking passionately to their fellow BOMA members, warning of the potential fallout if the initiative failed as it did three years prior. Both also argued in favor of three versus two terms, the only apparent remaining question, which had already passed unanimously at the first reading.

Roberson pointed out that since the failure of term limits three years ago, there has been a “sea change” even with those who voted against it at that time.

“Those that once opposed term limits, now have been converted. In fact, I’ve not seen such a dramatic conversion since the days of Billy Graham crusades,” Roberson said in the only moment of levity during the lengthy and intense debate.

After the vote on the term-limit ordinance was taken at the second reading on June 28, Clary counted the votes. Realizing that the measure failed with only eight “yes” votes, Clary reminded the BOMA members of the nine votes that were needed and asked if any of the people who voted against it or abstained wished to change their vote.

After a seemingly lengthy and awkward silence, Clary moved on to the next item and suggested taking a five-minute break.

Nearing the end of the agenda following three hours and forty minutes of meeting, and immediately after returning from an executive session, Roberson made a motion to reconsider their actions on the term-limits ordinance.

A discussion regarding the motion and other options ensued, including the possibility of taking advantage of the fact that three members who were on the prevailing side had left the meeting. Eventually, and with input from the city attorney advising that they could take up the ordinance at the next meeting, the remaining members decided to delay another vote until then.

Also taken up at the June 28 meeting was Ordinance 2022-16, which would reduce the number of aldermen from 12 to half that number over the next two years.

Sponsors of the ordinance were the same five aldermen who caused the term-limit ordinance to fail on second reading and would not reconsider their actions – Brown, Collins, Cunningham, Hayes and Petrelli. Petrelli, after having received feedback from constituents, withdrew as a sponsor during the meeting.

Brown took the lead in presenting the proposed ordinance, justifying the reduction in citizens’ representation on the recent post-census redistricting, which he claimed created 13 aldermen due to Ward 2 boundaries no longer including Peterson’s residence.

Brown went on to talk about state law that changed after Hendersonville changed charters in 1986, moving from five to 12 aldermen, the maximum allowed by state law at the time.

According to Brown and city attorney Bradley, state law since 1991 allows for only a maximum of eight aldermen, and any other changes to the ward structure must incorporate that maximum number of aldermen. Additionally, because of that same state law, a reduction in the number of aldermen cannot be reversed.

Brown and other sponsors of the alderman-reduction ordinance in promoting the measure all mentioned that the reduction in representation would result in less or smaller government and would likely reduce the $88,000 in current total salaries for the 12 alderman by half, to $44,000.

As Petrelli did when she withdrew as a sponsor, the remaining sponsors all claimed that their position was the newly popular “conservative” one.

Waters, who sits on the general committee that passed the ordinance June 14 without it even appearing on the agenda, was the only one of the three committee members who voted “no” on the ordinance. He raised a number of issues with the proposal, and said he was upset at the way it was brought about, especially in committee.

After about 50 minutes of discussion, the ordinance to reduce the number of aldermen failed with nine “no” votes and “yes” votes coming from four of the same aldermen who voted “no” on the term-limits ordinance: Brown, Collins, Cunningham, and Hayes. 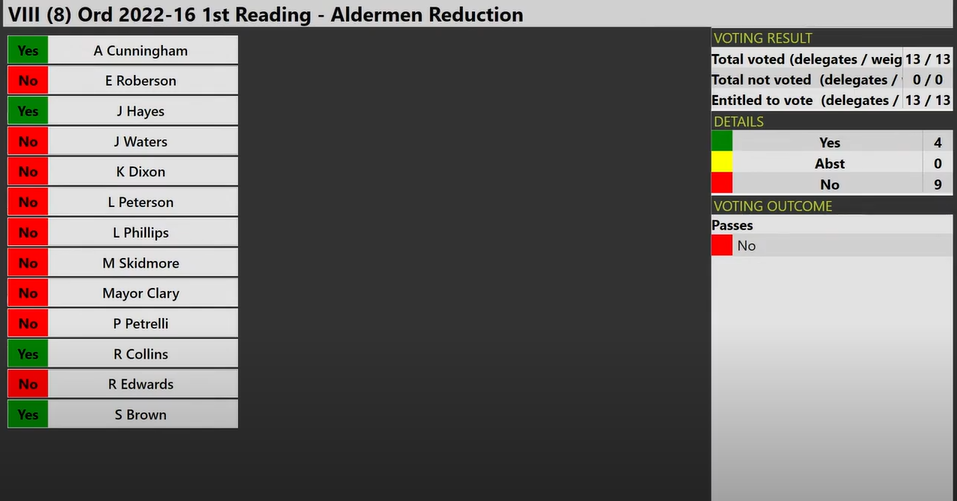 At the same meeting, while promoting a lesser, smaller government and saving half the cost of aldermen, the Hendersonville BOMA unanimously approved the creation of a new position of public information officer. The position was proposed at a pay grade of 20, which has a range of $58,803 to $88,373 per year.

The alderman seats up for re-election in November 2022 are currently held by Peg Petrelli (Ward 1), Lori Phillips (Ward 2), Arlene Cunningham (Ward 3), Steve Brown (Ward 4), Jonathan Hayes (Ward 5), and Eddie Roberson (Ward 6), and include four of the five who caused the term-limit ordinance to be halted.

The video of the June 28 meeting of the Hendersonville Board of Mayor and Aldermen can be viewed here.

Laura Baigert is a senior reporter at The Star News Network, where she covers stories for The Tennessee Star.
Image “Mayor Jamie Clary” by City of Hendersonville.