The Republican primary for the newly drawn Tennessee House District 35 covering parts of Sumner and Trousdale counties is a three-way race with one of the candidates being a former registered Democrat in another state and another living out of the district.

The State House District 35 seat was held by conservative Republican Representative Jerry Sexton until the recent redistricting, which put Sexton in House District 10, currently held by State Representative Rick Eldridge (R-Morristown). The new District 35 encompasses the portions of Sumner and Trousdale counties that have been represented by Terri Lynn Weaver (R-Lancaster).

DeWitt, who was endorsed by the Democrat-run Strong Schools PAC during her 2018 campaign, has served on the Sumner County Commission one term and is the only candidate in the Republican primary who has a voting record. 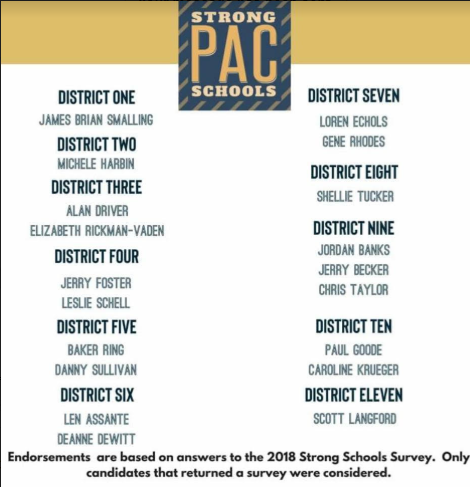 She and her mother being natives of Chicago, DeWitt said with a laugh it’s where there is a little bit of corruption going on during her speech at the July 3 GOP breakfast.

“Mom and I may not always agree on politics, but we can always talk about it,” DeWitt said, adding that she has a lifelong history of talking about politics with her mother and grandparents, and “really trying to get them to see a different side.”

DeWitt’s implication was that her party affiliation was different than that of her family and her 90-plus-year Democrat-dominated hometown.

However, recently revealed election documents from the state of Ohio, where she lived before coming to Sumner County, show that DeWitt was a Democrat.

A Ohio voter registration form shows DeWitt’s party affiliation as Democrat when her status was active between her registration date of January 23, 2002, and a last-voted date of November 8, 2011. 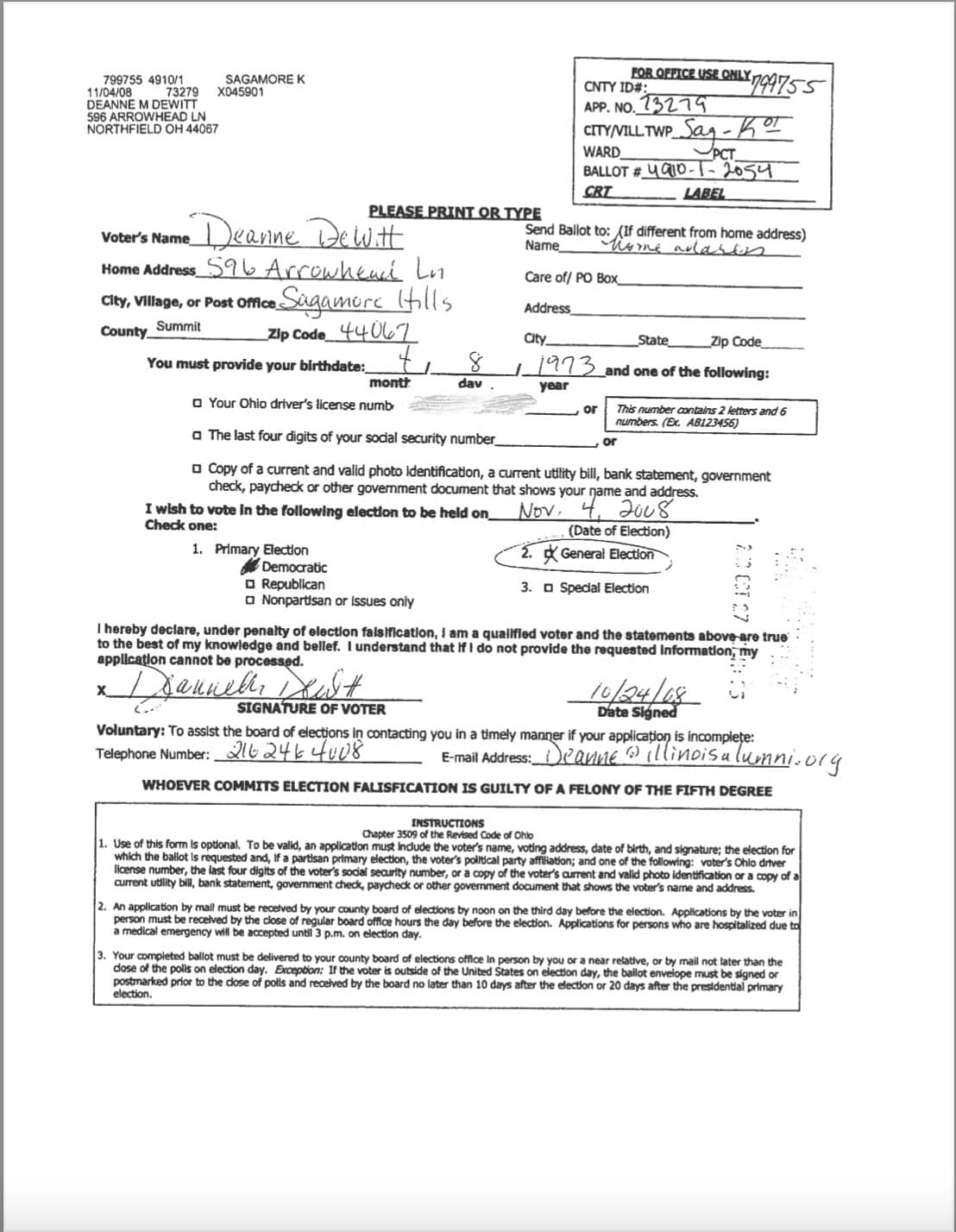 Under penalty of a fifth-degree felony for election falsification, DeWitt stated her intent to vote as a Democrat in the November 4, 2008, presidential election – the year that Barack Obama and Joe Biden were on the winning Democratic ticket against Republicans John McCain and Sarah Palin.

In August 2019, the same year as a five-year property reappraisal, DeWitt voted to raise the property tax rate in Sumner County by 17 percent, The Tennessee Star reported. During her speech at the Sumner GOP breakfast in July, DeWitt presented the tax increase as a reduction in the property tax rate.

“I’m a conservative. I’m going to do everything I can to prevent any new taxes,” DeWitt promised, if she were elected as the District 35 representative.

In February 2020, shortly after Joe Biden took the White House and as a movement was initiated around the country to disarm citizens through red-flag laws, there was a statewide effort by Tennessee Stands United to get a Second Amendment (2A) Sanctuary resolution passed in all of Tennessee’s 95 counties.

Prior to the introduction of a resolution to the commission’s Legislative Committee, a well-attended 2A rally was held in Sumner County.

At the commission’s legislative committee meeting, an amendment to the resolution was proposed by Commissioner Chris Taylor (R-District 9), who went on to unsuccessfully run in the May 3 Republican primary for the county mayor’s seat, that would have stated support for the entire Bill of Rights. The amendment, however, did not accomplish the original intent and was flawed in its interchangeability in the meaning of the terms “rights” and “privileges.”

With a turnout of about 200 people and nearly two dozen speaking in favor of the original 2A resolution as presented, the county commission passed the measure by a vote of 18 to 4. The passage of the resolution, however, came only after several hours of public comments, debate and DeWitt proposing a new version of the 2A resolution that deleted “whereas” clauses she felt were irrelevant. DeWitt was one of the four who voted against the 2A resolution, The Star reported.

At the July 2022 GOP breakfast, DeWitt seemed to be addressing potential concerns about the alternate resolution, her revisions to the resolution and subsequent vote against the 2A Sanctuary resolution when she said, “We have the right to bear arms. I will never vote for legislation that infringes on the right of law-abiding citizens to keep and bear arms. So, I just want that to be perfectly clear.”

She added, “As a defender of our Constitution, [and] these values, I will never vote for a piece of legislation or a resolution that misquotes the constitution.”

Two controversial issues of The Meadows 1,115-unit housing development and $500,000 in funding for what is known locally as the Comer Barn were taken up at an August 2020 county commission meeting. Twenty members of the public spoke against either or both of the projects.

The night of the meeting, DeWitt said she was wearing her party dress in hopes of having something to celebrate as she made an emotional appeal for the $500,000 in funding for the dilapidated barn.

Going against the pleas of citizens, DeWitt went on to vote in favor of both measures, The Star reported.

Candidate Joe Kirkpatrick, as a lobbyist for Tennessee Growers Coalition which supports pro-hemp and pro-cannabis, posits that he is the most qualified candidate for District 35. Having successfully passed seven laws over seven years, Kirkpatrick says he knows how a bill gets drafted and sponsored, is familiar with the committee system, and how to steward a bill through its passage into law.

In his online campaign platform, Kirkpatrick is bold in his position statements, calling out, among numerous other points, DeWitt as his Republican-in-name-only (RINO) opponent for voting to raise Sumner County property taxes, the executive overreach of the governor and municipal governments for unconstitutional lockdowns, and the $500 million in corporate welfare for the multi-billionaire owner of the Tennessee Titans.

This week, questions have arisen about Kirkpatrick’s residency and whether he actually lives in the district. According to state online campaign finance reporting, Kirkpatrick indicates that his address is 253 Kirkpatrick Dr. in Gallatin, which is within the 35th House district.

However, a 2021 property tax bill in his name and that of his wife shows a Goodlettsville address that is in the 45th House district represented by Johnny Garrett (R-Goodlettsville).

In a Facebook post and in the interest of transparency, Kirkpatrick addressed the residency issue head-on by saying that through inheritance, he owns several properties that are located within District 35. Under Tennessee state law, a person can run for office without living in the district, provided that they move into the district once elected.

Kirkpatrick maintains that he is consistently polling ahead of DeWitt and the other candidate in the race, William Slater.

Slater, a professional educator since 1985, is currently the dean of adult and online studies at Welch College, an accredited Christian college in operation since 1942.

Slater is a past chairman of the Republican Party of Sumner County who announced this week that he has received the endorsement of former Arkansas Governor Mike Huckabee.

Slater said on The Tennessee Star Report with Michael Patrick Leahy that he is running because he is passionate about education, business and public safety.

The winner of the Tennessee House District 35 Republican primary will be unopposed by a Democrat in the November 8 general election.