PHOENIX, Arizona – Florida Gov. Ron DeSantis spoke to a theater full of onlookers in downtown Phoenix Sunday at a Turning Point Action rally to support local Trump-endorsed nominees like Kari Lake and Blake Masters, mentioning Florida would be willing to help Lake secure the border if she gets elected.

“What I’ve told Kari Lake, I said ‘look, if you’re willing to put people on that border, and keep ’em [illegal immigrants] from coming in to begin with, I’ll send National Guard to help with that,” said DeSantis.

At the rally titled “Unite and Win,” DeSantis said all Arizona Republican organizations and voters must unite at this time because of the damage that can be done under elected Democrats. 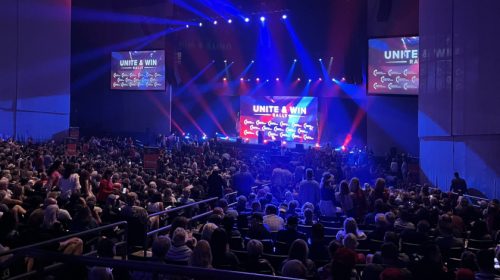 “If you look around this country, and you survey the damage and the destruction that’s been done by leftist politicians in cities and states all around the country, the fact of the matter is, when leftist government takes hold, society flounders, crime goes up, they release people back on the street, they won’t prosecute, you have homeless, you have drugs, you have higher taxes, everything you can think of. They destroy their communities, and it shouldn’t be that way,” DeSantis said. “Now we’re in a situation where once areas go left, buckle your seatbelt because it isn’t gonna be an easy ride. I do not want to see that happen here in the state of Arizona. We can’t let that happen.”

DeSantis told the crowd it is important to remember the damage that Democrats can do, especially when looking at Lake’s “woke” opponent, leftist Katie Hobbs. Moreover, he warned that Americans should be worried about the “dishonest” corporate media with its agendas, something he said Lake would fight.

Ultimately, DeSantis shared the various Conservative victories Florida has seen, such as election integrity, backing law enforcement, and limiting lessons on gender identity and sexual orientation from the classrooms of young children – sometimes called anti-grooming. He said he hopes to see the same in other states like Arizona.

“So, Florida has led the way, fighting back against [Joe] Biden, and I think we’ve demonstrated the need to have strong governors across the country to be able to push back at what’s going on in Washington D.C., and I know Kari Lake will push back against Biden, and that’s very important. I know Blake Masters in the Senate is going to give Biden a lot of problems, which is what we need,” DeSantis said.

Lake also had a chance to speak at the event, telling Biden that “we have had enough.”

Lake stated that she does not care what party you are from; her policies are best for the people of Arizona. She mentioned having plans to start securing the border on day one, hire more police and build more jails to lower crime, and never enact another COVID mandate.

Neil Jones is a reporter for The Arizona Sun Times and The Star News Network. Follow Neil on Twitter. Email tips to [email protected].