RICHMOND, Virginia – A drone delivered a small package to Virginia’s Executive Mansion on Wednesday morning as part of an announcement that Walmart partner DroneUp is expanding with 655 new jobs plus a drone pilot training facility at Richard Bland College. In May, DroneUp announced that it would deliver to 34 sites across the U.S. by the end of 2022. Virginia Beach Mayor Bobby Dyer said that would include customers near three Walmart drone delivery hubs in Chesapeake, Chesterfield County, and Chester.

“Our delivery capacity will be four million homes by the end of this year. Our goal is 30 million by the end of next year,” DroneUp CEO Tom Walker told the media. “Our partnership with Walmart is unique because there’s 4,700 Walmarts. Ninety-two percent of the U.S. population lives within 10 miles of a Walmart. So as we work with the FAA and negotiate that broader range, we’re starting to go three, four, five, ten miles. It’s not long before 92 percent of the U.S. population can be receiving products.” 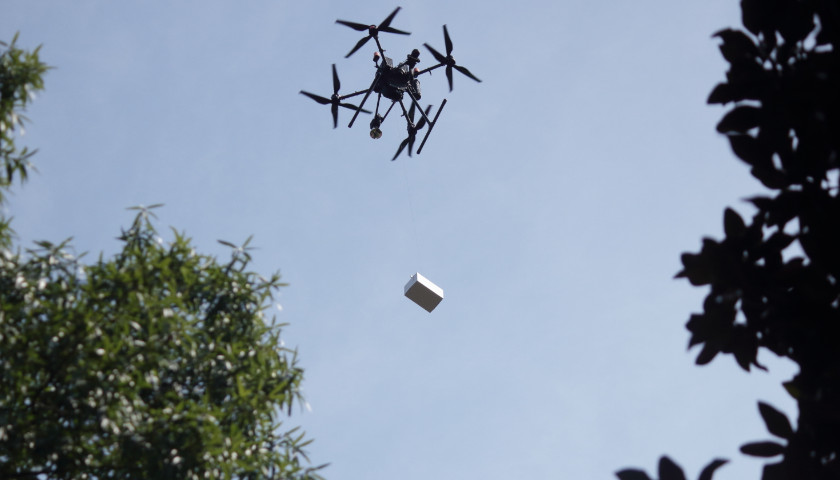 Walker said that the drones have technology to avoid flying over people and moving vehicles, and operators keep the drones in their sight at all times. He said the drones have a 10-pound capacity, and suggested that they would deliver products like eggs and soda, but said they don’t deliver hazardous material or alcohol.

“If you think about all the packages you have delivered at home by other providers, they’re generally, 90 percent of them, are under five pounds, right? So with a 10-pound capacity we can deliver anything,” Walker said.

“So from the time the order is placed until the delivery is made to the home is under 30 minutes,” he said.

DroneUp is still developing new versions of its drones, but Walker hopes that with economies of scale the price of the drones will eventually come down to $15,000 each.

“We come out with a new version about every six months,” Walker said, and highlighted one drone in a display nearby. “This one has a parachute on the side, that you see, so if we have any type of failures, any type of detection of any issue, all the systems shut off, the parachute deploys, and gently sets the drone on the ground.” 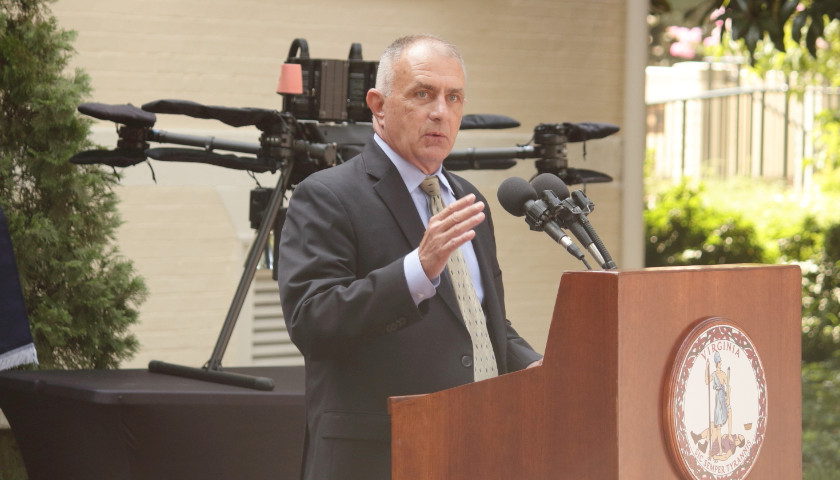 DroneUp is headquartered in Virginia Beach. The company announced Wednesday a $7 million expansion creating 510 new jobs, increasing the site’s footprint from 15,000 square feet to 80,000 square feet. It also announced a $20.2 million investment to create a training and research and development facility at Richard Bland College (RBC) outside Petersburg.

Youngkin and officials from the Petersburg area recently announced an economic partnership between the city, organizations, and the state, including a plan for RBC to launch a STEM-focused lab school. On Wednesday, Youngkin credited that with making Virginia competitive to companies like DroneUp.

He said that high school students will be able to get a micro-credential in unmanned aerial systems through DroneUp and RBC.

Walker told reporters that concrete was poured yesterday for the facility at RBC.

“My anticipation is we’ll be training in two weeks,” he said. “The first part of the program is two weeks online, and then we fly them [trainees] from wherever in the United States or otherwise to Richard Bland College. They’re there for two weeks.”

Then, the trainees will transition to one of the area Walmarts.