U.S. Senator Marsha Blackburn (R-TN), who is a member of the U.S. Senate Armed Services Committee, met with Taiwan President Tsai Ing-wen at the Presidential Office in Taipei Friday. 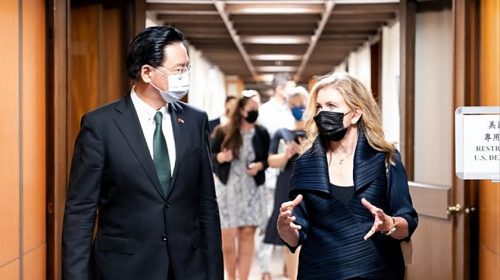 Later, Blackburn delivered remarks at Taiwan’s Ministry of Foreign Affairs (MOFA) Institute of Diplomacy and International Affairs (IDIA) and meeting with the American Chamber of Commerce in Taiwan.

“The United States and Taiwan have a strong partnership, and I appreciate President Tsai’s leadership. Now more than ever, we cannot let Communist China dictate who can visit or support our freedom-loving partner,” said Senator Blackburn of the meeting. “My visit to Taiwan is an important step to ensuring the Indo-Pacific Region’s continued success against the New Axis of Evil. In Congress, I am helping to lead the effort to increase military support to Taiwan and strengthen security for Pacific Island nations. The White House needs to follow suit by ensuring that the CCP cannot accomplish their goal of regional isolation. I will not be silenced by Communist China, and I will not stop fighting for global freedom.”

In her remarks, Blackburn spoke about increasing support for Taiwan.

“Something we focus on in the Senate Armed Services Committee is modernizing the American military and preparing our troops for the future fight, as opposed to the fight we wish we were facing,” she said; adding, “I know that Taiwan is in the middle of its own debate over military modernization, and that President Tsai is pushing for a much-needed shift toward an asymmetric strategy.”

Blackburn continued, “China’s continued aggression in and around Taiwan’s territory is just one example of why a defense-focused force is so critical to maintaining the safety and security of the region. [China President] Xi Jinping and his military leaders are not prone to making spur of the moment decisions; they planned for this moment, and they were just waiting for an excuse to bully Taiwan. They are clearly testing Taiwan’s resolve, and the rest of the world’s tolerance for even more imperialist violence.”

“Most of you probably know that in May, President Biden signed the Ukraine Democracy Defense Lend-Lease Act into law, which gave him the authority to provide defense aid to Kyiv and other governments in Eastern Europe. At the end of July, I introduced similar bicameral and bipartisan legislation which would allow a U.S. President to expedite similar types of military aid to Taipei,” said Blackburn.

“In addition to providing those defense articles, this legislation would strategize U.S. defense policy in support of Taiwan, require comprehensive reporting on what Taiwan needs to defend itself, and give us a clearer picture of what the threat from the PLA actually appears to be,” she said.

The visit by the senior senator from Tennessee comes on the heels of weeks of protest by the Chinese government, who say the attention by American lawmakers run afoul of their “One China” policy.