On a 150-year-old farm in Brewster, Tom Behrends hopes his tell-it-like-it-is style will finally get the attention he believes it deserves in Minnesota’s race for governor.

“The public needs to know how pathetic his leadership was as a National Guardsman,” Behrends said about Gov. Tim Walz.

He’s back again to wage a public war of words against Walz. This is what his grain bin looked like in the 2018 election: 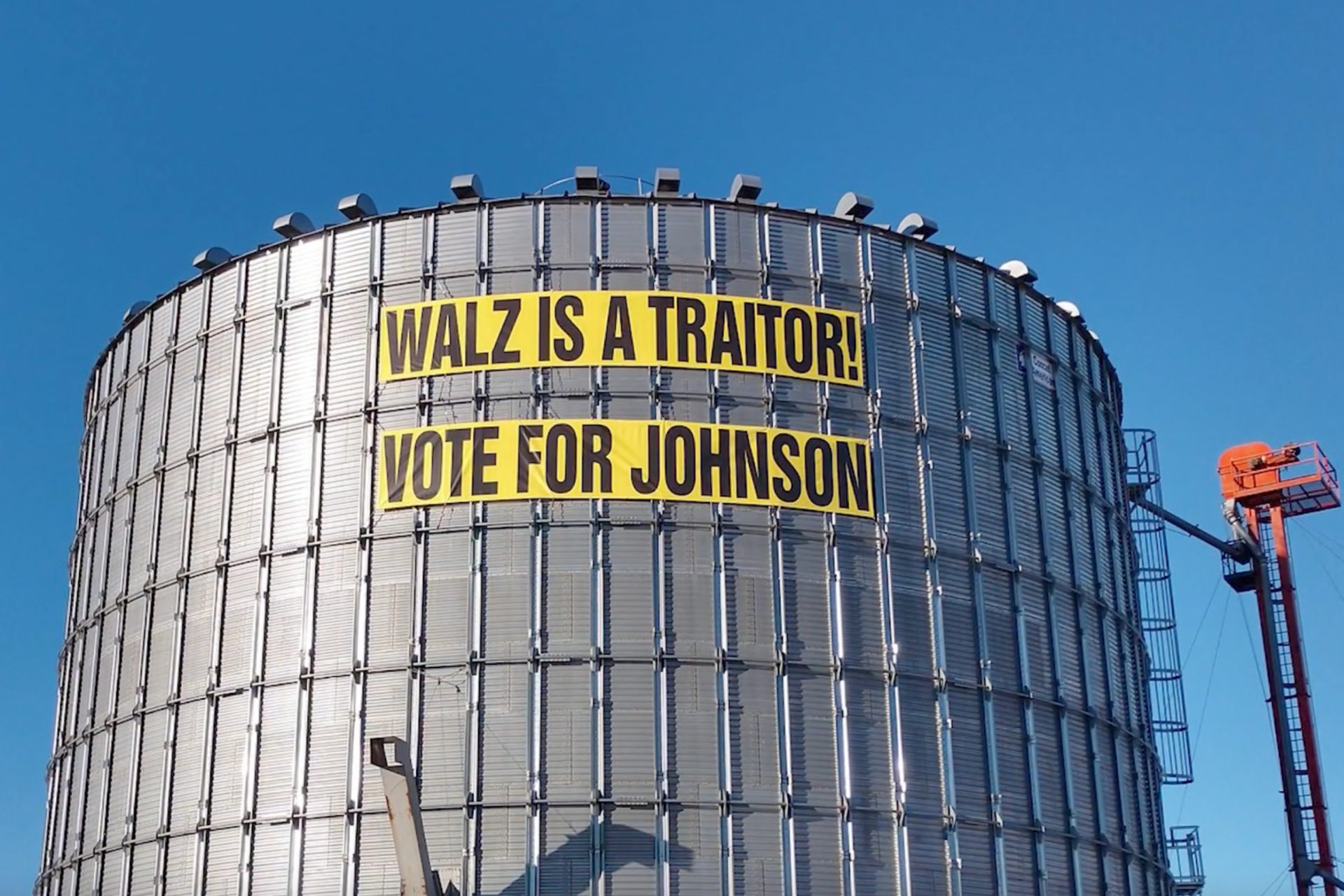 “He abandoned us. What the hell kind of leader does that? As soon as the shots were fired in Iraq, he turned and ran the other way and hung his hat up and quit,” Behrends said.

This all starts years ago, when Behrends says Walz’s misleading statements about his military service first led him to come forward in the fall of 2018. The story was largely ignored and Minnesota’s largest newspaper, the Star Tribune, checked it out but decided not to publish, according to Behrends.

“When the reporter called, I thought, ‘What the hell, is this North Korea?’” Behrends recalled. Alpha News reached out to the Star Tribune but didn’t receive a response.

Back in early 2005, a warning order went out to southern Minnesota’s First Battalion-125th Field Artillery to mobilize for a mission to Iraq, Behrends said. Walz served as the unit’s highest non-commissioned officer after he was conditionally promoted to command sergeant major on April 1, 2005, records show. On May 16, Walz retired from the guard, avoided the deployment, and ran for Congress.

Walz has implied in previous statements that he didn’t retire because of the deployment, but National Guard records show his service obligation wasn’t complete until September 2007.

Behrends was next in line for the position and was asked to take his place.

“I was like well, for Pete’s sake, if this guy quits, if I say I’m not going to do it, I mean, what the hell kind of leadership is that?” Behrends recalled. “If a company would say we’re going to deploy to Iraq and the foreman says, ‘I’m not going,’ what does that say to the 500 that work in that factory?”

Command Sergeant Major Behrends went on to serve in Iraq on a nearly two-year deployment, all while Walz began using that very title as a congressman.

Behrends said he contacted Walz with his concerns before raising the issue publicly, sending letters to Washington in 2016. The letters all went unanswered, Behrends said.

Behrends again tried to draw attention to the story in 2018 when Congressman Walz announced his run for governor.

“It kind of just sat there, you know, when he was a congressman. He bragged that he was a retired command sergeant major and the highest-ranking person ever in the House,” Behrends recalled.

“Then, the state of Minnesota came out after 2018 after this was exposed and they said, ‘Well, he can say that he served as a command sergeant major, but he can’t say he’s a retired one because he’s not,’” he added.

A spokesperson for the Minnesota National Guard previously said Walz wasn’t able to retire as a command sergeant major since he failed to complete coursework and other requirements related to the rank.

Documents show the Army corrected Walz’s service record. He was reduced in rank to an E-8 master sergeant after retirement.

“It’s stolen valor is really what it is. I don’t know of anybody else that’s done what he’s done,” Behrends said.

In 2018, Behrends gave the story the full-court press. He sent a letter with the entire story to radio and TV stations across the state. A few outlets picked up on the story, including Alpha News.

But Twin Cities TV stations and the Star Tribune were silent, even after Behrends says the newspaper checked it all out.

The Star Tribune editorial board endorsed Walz in 2018 for governor.

Between lockdowns, riots, unchecked crime, and a charred police precinct, Behrends felt he had no choice but to again come forward ahead of November.

“Allowing that to be burned down was just like having the Alamo be burned down. It was like, you defend that to the last man,” Behrends said of the Minneapolis Police Department’s Third Precinct.

“If he would have went to Iraq, he’d still be hiding under his desk over there because that’s just, you know, just the cowardice that I see portrayed with him,” Behrends added.

“I would take any 19-year-old cook before I’d go to war with him,” he quickly replied.

“I don’t know how he could even utter such a statement. I mean, it’s just absolutely sad,” he added.

So, this election year, it’s all built up again to Behrends’ new grain bin message.

“He called Jacob Frey an abject failure, so I was like, ‘That’s what he is,’” Behrends said of his first sign.

“Walz is a traitor” also made a return.

“The last one I put together and he said it himself too, ‘If you don’t like how I do my job, they can vote me out,’ so we got ‘vote him out’ at the bottom of it. That’s what we need to do, vote him out,” Behrends said of the last banner on his bin.

A spokesperson said this has been in the news before and pointed Alpha News to a past story where Walz said “normally this type of partisan political attack only comes from one who’s never worn a uniform.”

Liz Collin has been a truth-teller for 20 years as a multi-Emmy-Award-winning reporter and anchor. Liz is a Worthington, Minnesota native who lives in the suburbs with her husband, son and loyal lab.
Photo “Tom Behrends” by Alpha News.