In what her Republican opponent Kari Lake is calling a “dirty trick,” Secretary of State Katie Hobbs, also Arizona’s Democrat nominee for governor, is paying Google to redirect internet users who search for Lake to her own donation page.

Lake posted the following screenshot in a fundraising email: 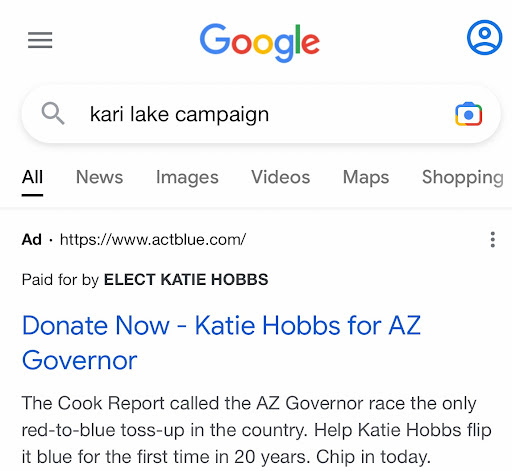 That screenshot depicts the apparent Google search results for users who type “Kari Lake Campaign” into the search engine.

The first result is a paid advertisement – one that sends the user to Hobbs’ donation page.

Google allows customers to pay for advertisements that boost their chosen links to the top of its search results.

“Katie Hobbs knows she wouldn’t stand a chance against Kari Lake in a clean and honest fight,” Lake’s message to potential donors says. “That’s the reason Hobbs refuses to debate her, hides from voters, and flip flops on important issues like illegal immigration. Hobbs has determined that her only path to beating Kari Lake is to keep hiding and use dirty tactics like OBSTRUCTING Lake’s ability to fundraise.”

Hobbs’ refusal to debate has been a a hot topic for Lake of late.

As last Friday’s deadline to schedule a debate has come and gone, Lake has been ripping her Democrat opponent for ducking her invitation.

“Well, the deadline was today, and my opponent Katie Hobbs has officially declined the debate,” Lake said. “Hobbs is so terrified of the fact that I might bring up that she is a twice-convicted racist, and that her racism cost the Arizona taxpayers nearly three million dollars.”

“She doesn’t have one single policy to stand on,” Lake said. “Not one. I made it unbelievably easy for her. She picks the date, the time, the moderator. She even had the chance to write all of the questions. But she would rather hide from the voters and let Soros and other dark money groups pour millions of dollars into attack ads against me. That’s her plan.”

The contentious Arizona gubernatorial election, as with other elections around the country, will be decided on November 8.