COLUMBUS, Ohio – The Ohio March for Life – together with the Center for Christian Virtue – held the first of what they hope to be a new tradition of annual gatherings to march for life on the Capitol Square in front of the state House on Wednesday. 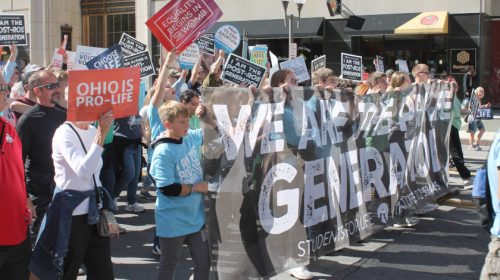 “So many people in our lives said that Roe v. Wade would never be overturned,” State Representative Jena Powell (R-Arcanum) said. “Now we have the opportunity to say no more holding us back. The fight in Ohio is just beginning. All of us together using our voices to ensure abortion will no longer happen here in Ohio. We need pro-life, pro-family policies where families flourish and children are protected. We need to be able to say that not only is abortion illegal in Ohio, it’s unthinkable. We want to make Ohio the most pro-life state in the nation,” Powell told the exuberant crowd.

Rallygoers traveled from across the state to attend the four-hour event. Guest speakers discussed pro-life legislation and what the pro-life movement needs to focus on next, with overarching topics of abolishing abortions, speaking out for the unborn, and leading this movement with love.

“Will you heroically love the unborn? Do you think abortion is the human rights issue of our day? Will you march for the day when abortion is unthinkable? Will you lead with love? Will you win this battle with love?” March for Life President Jeanne Mancini asked the crowd. “That is what the pro-life movement is about.” 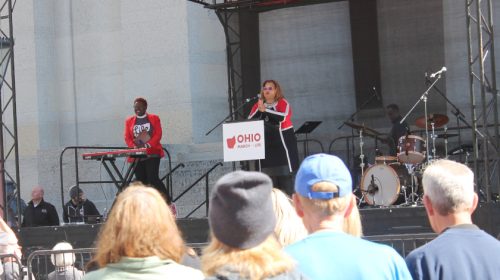 Ruth Edmonds, Center for Christian Virtue director of Christian engagement, was the master of ceremonies at the event, which encompassed a large list of speakers. Among those appearing at the event were Bishop David J. Bonnar, Sixth Bishop of the Diocese of Youngstown; Peter Range, executive director of Ohio Right to Life; Margie Christie, executive director of Dayton Right to Life;  Aaron Baer, president of Center for Christian Virtue; Dr. Alveda King, founder of Speak for Life; David C. Forbes, pastor of Columbus Christian Center, as well Powell, Mancini, and 19 state legislators.

“Each one of us from this day forward must wake up on mission. You have a purpose and mission in life and you will fulfill it. Our mission here today is to ensure that every pre-born child fills theirs,” said Range to the crowd as they prepared to march.

Pro-life attendees from around the state gathered, carrying banners and signs, chanting, and enthusiastically cheering at many of the statements made by the speakers. Despite the crowds and traffic, marchers made their way to the state House to make sure that their voices were heard.

A group of counter-protesters attempted to disrupt the event by beating large drums that echoed between the building, but the rallygoers took it in stride.

As the march took off, pro-life advocates were eager to tell their stories as they marched along the route. 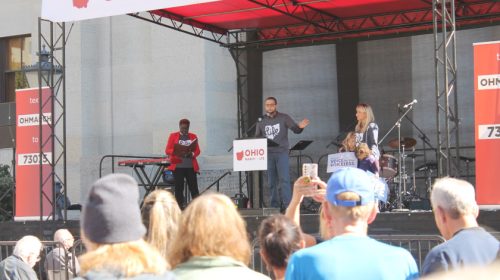 “I’m grateful for my life and that my mother gave me life. This is the world’s greatest sin. Until we get rid of this in our country, we all have to take part,” Marhofer told The Ohio Star.

Schools bused teachers and students in from around the state to participate in the march. Notre Dame High School English teacher and march participant Sharon Bohlen came from Toledo, Ohio with a bus full of high school girls who she said were willing to wake up early and take the 2.5 hour trip to Columbus so they too could make a difference.

“Life is precious and babies deserve a chance. I was pro-choice; I was very misdirected. I needed to understand that it’s human life, it’s a child. I am pro-woman and pro-baby. Everyone deserves life,” Bohlen told The Star.

Both the young and the old marched together as one for this common cause. Despite physical ailments, march participant and pro-life advocate Mike Hauck refused to allow those to hold him back from fighting for his beliefs. Even though he was only able to walk one block, he said that he wanted to physically step out and make a difference in the pro-life movement.

Hauck told The Star, “I’ve got to put my feet on the ground even if it’s just walking. People can donate but if you don’t show up then what are you even doing? Love conquers all. I have never in my life been around a group of such loving people.”

Edmonds told The Star organizers were were pleased with turnout and enthusiasm of the rallygoers, and plans are underway to make The Ohio March for Life an annual event.

Hannah Poling is a lead reporter at The Ohio Star and The Star News Network. Follow Hannah on Twitter @HannahPoling1. Email tips to [email protected]