Former president Donald Trump held a Save America rally in Mesa, Arizona on Sunday afternoon to support the MAGA slate of candidates he’s endorsed in the state and to talk about the attacks he’s under. He dropped multiple hints at Mesa’s Legacy Sports Park that he may be running for president again in 2024.

Trump said, “We’ll be making a decision soon. I think everyone is going to be really happy.” He added later during the event that he got more votes in 2020 “than any sitting president in history. Now we may just have to do it again. Stay tuned.” 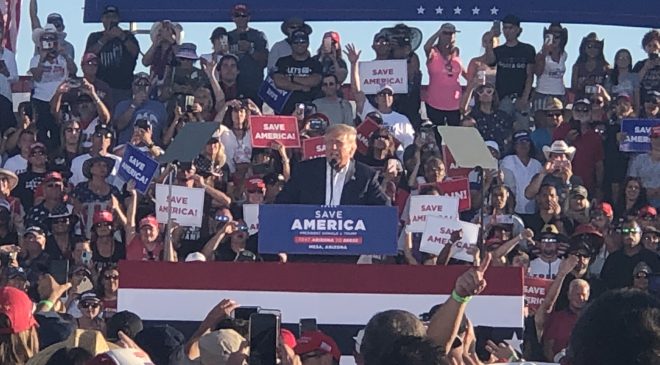 Most of the rally featured Trump talking, with brief remarks by a couple of the candidates, gubernatorial candidate Kari Lake and U.S. Senate candidate Blake Masters. Most of the crowd could not see the stage due to a large press box blocking their view. A spokesperson for the Lake campaign told The Arizona Sun Times there were limited venue options, since so many locations will not host MAGA events due to the hostility they receive. Shortly after he started his speech, Trump observed all the people cut off by the media box and announced that his people will make sure this does not happen again.

Trump began his talk by discussing what happened to Arizona under the Biden administration. He said gas prices are up 86 percent, inflation is costing the average family almost $1,000 per month, and illegal border crossings are skyrocketing. He said, “The border is completely obliterated,” calling it “the worst border anywhere;” even “Third World countries” would not allow what the Biden administration is doing.

“Two years ago we had the strongest border in the history of our country,” Trump declared. He said illegal immigrants from 140 countries are entering the U.S., and noted that Tucson recently set a record for homicides. He listed off his accomplishments on the border, which included ending the “catch and release” program and building a significant amount of the wall. 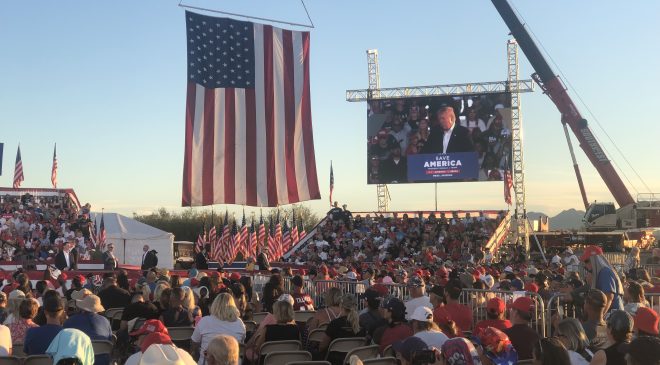 Trump frequently mentioned Masters during his speech while blasting Senator Mark Kelly (D-AZ). Masters is the only one of the MAGA slate in Arizona who is lagging in the polls, dwarfed by Kelly’s massive spending advantage. Trump called Kelly out for frequently being the deciding vote in the Senate getting the Democrats’ agenda passed.

Trump declared numerous times that he won the 2020 election, saying, “We won big.” He criticized “fake mail-in ballots,” advising people to vote in person on Election Day instead. He told the crowd to vote for the MAGA slate “to prove Arizona is still a red state.”

He blasted the “fake news media,” while singling out three right-leaning outlets for praise: Right Side Broadcasting, Newsmax, and Rumble.

Trump used a large part of the speech to defend himself against the criminal and civil investigations he’s under. “You don’t hear about greatness anymore” under the Biden administration, he said. “All you hear about is investigations.” He said the Democrats have been investigating him for seven years but still haven’t gotten anywhere, he contends, because he’s innocent. 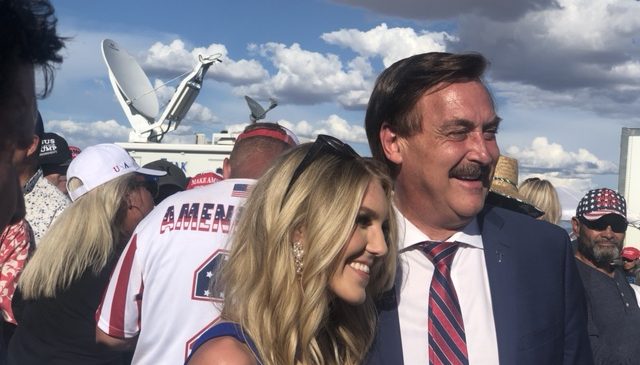 He discussed the now-discredited dossier the Democrats used to attack him, their accusations of collusion with Russia, and then the Mueller report, which found no collusion. He pointed out that The New York Times, The Washington Post, and CNN admitted the dossier was “fake,” adding “no one watches CNN.” He said there was “impeachment hoax one and two” but no “censorship of Biden family corruption.” The crowd cheered when Trump announced that prosecutors are “leaking they may be charging Hunter Biden.”

He went after the New York attorney general who recently sued him, referring to her as “Leticia Peekaboo James” and calling her “racist.”

He defended a phone call he made to Georgia Secretary of State Brad Raffensperger on Jan. 6, 2021, when he said, “All I want to do is this: I just want to find 11,780 votes, which is one more than we have. Because we won the state.” Prosecutors are now investigating the call. Trump said he was merely engaging in “election integrity” and “free speech.” He complained that Atlanta has soaring crime rates “yet they’re looking at a call I made about election integrity.”

Trump spent a significant amount of time listing ways previous presidents have mishandled documents they took from the White House, to show that the criminal investigation into Trump’s moving of documents to Mar-a-Lago reflects “a two-tiered system of justice.” He asked, “When will they prosecute the others?”

He ranted about how the Biden administration is going after pro-life protesters, saying they’re “being treated like terrorists and drug lords.” In contrast, “nothing happens to Antifa and BLM.” He said Democrats are “against God, against guns, and against voter ID.”

A video compilation was displayed midway through the event showing clips of President Joe Biden’s mental blocks when speaking. Trump said, “People are pulling strings and it’s sad to watch.” He declared, “We have a president who is cognitively impaired.”

Trump blasted Representative Adam Schiff (D-CA-28) for saying that Trump’s son Donald Trump Jr. is going to end up in prison, and said his other son, Eric, has received more congressional subpoenas than anyone.

He expressed his concern that Biden’s handling of the Russia-Ukraine war is going to lead to World War III, and that China is now buying oil from Iran.

He addressed abortion, stating, “I believe in three exceptions [to abortion], like Ronald Reagan.” He cited rape, incest, and danger to the life of the mother. A large truck displaying a photo of an aborted 10-week-old fetus splashed across its entire side sat outside the entrance to the sports park.

Trump commended numerous people at the rally, including Tom Holman, who served in his administration as acting director of the U.S. Immigration and Customs Enforcement, former Sheriff Joe Arpaio, and Brandon Judd, president of the National Border Patrol Council. Judd spoke briefly, calling Trump “the best president ever.”

Masters spoke about what’s taken place during the Biden administration. “Biden happened,” he said. “Kelly happened. Twenty-two months later, everything is a disaster.”

Next, Trump blasted Democratic Arizona Secretary of State Katie Hobbs, who is running against Lake. He called her a “disaster” who wants “open borders,” has “no charisma,” and “doesn’t like the Border Patrol” or “law enforcement.” Additionally, “No one fought harder than her for sanctuary cities” and “she’s a crusader for rigged elections.” He pointed out that “She fought the audit every step of the way.”

He introduced Lake, who told the crowd that “know-nothing consultants” told her to back away from Trump, but she responded to them, “Put down Hunter’s crack pipe.” She said she’ll show them how she backs off from Trump — and gave him a hug. Trump urged support for the rest of his MAGA slate in Arizona, which includes State Representative Mark Finchem (R-Oro Valley) for secretary of state and Abe Hamadeh for attorney general.

Trump concluded his speech with some statements about the condition the country is in. “We’re a nation in decline, a failing nation,” he said. Trump explained how bad the situation with energy has become under the Biden administration, saying, “We’re begging Venezuela and Saudi Arabia for oil.”

He accused the Biden administration of “weaponizing law enforcement against the other party.” He lamented, “We no longer are respected and listened to around the world.” He ended his speech declaring that “Americans kneel to God and God alone,” calling the country “One glorious nation under God.”

Rachel Alexander is a reporter at The Arizona Sun Times and The Star News Network. Follow Rachel on Twitter. Email tips to [email protected]
Image of “Donald Trump” by Dan Scavino Jr.