Arizona’s Republican gubernatorial nominee spoke at the Arizona Young Republicans Engagement Forum along with former U.S. representative from Hawaii  and now-ex-Democrat Tulsi Gabbard, where the two discussed the hope they see in the future for the next generation of Republicans and Arizona.

“You know what; this new Republican Party is truly the party of We the People. We have the spirit of our founding fathers in this movement. I have no doubt about that,” Lake said. “I say that we are not just red-blooded Americans, we are red, white, and blue-blooded Americans, and we are ready to save Arizona.”

Gabbard sat next to Lake onstage, sharing that she felt inspired by the crowd of America First supporters gathered at the event. 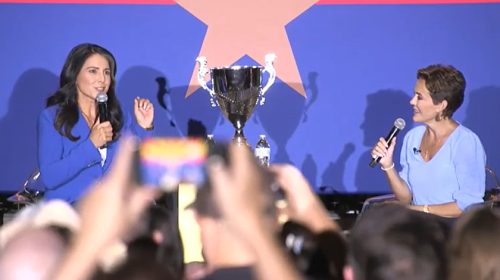 “It’s [the crowd] just awesome. It’s so inspiring to see all of you out here, fired up for Kari, fired up for each other, fired up for a new beginning come the day after Election Day,” Gabbard said.

Gabbard herself recently experienced a new beginning, announcing that she had left the Democrat Party after seeing it become something unrecognizable. Along with her political transformation came an endorsement for Lake. At the event, she told the crowd this support came because she believes Lake is the kind of leader America needs.

“This is why I’m here to support Kari for governor. Because I know that in her heart, she’s doing this because she works for you. She is asking every single one of you here in Arizona for the privilege of serving you, that you are the one hiring her, and she’ll never forget that,” Gabbard said.

She said one of the major problems plaguing modern politics is that the government has become “of, by, and for the elite,” with every action taken by the government being to build its power, not protect and better the people it is sworn to serve.

“Where I find hope, as I travel to different places across the country and having the privilege of spending a little time with people like you, is that the strength and power in this country doesn’t come from people who hold fancy titles or people who make a lot of money. It comes from us,” Gabbard said. “Now is the time that we have to take action for our future, for our freedom, and more importantly, for the freedom of our kids, grandkids, and those who will come after.”

Moreover, Lake spoke about her past as a registered Democrat, when she voted for Obama but later realized it was not the party she wanted to be associated with. She said there is no shame for her or anyone else who is turning away from the Democrat Party.

This event took place exactly three weeks before Election Day. However, Lake said that the date only marks the start of the real work.

“Somebody said, ‘You [Lake] need a vacation,’ and I said, ‘Are you kidding? On November 9th is when the work begins.’ So, we’re going to work hard. We’re going to roll up our sleeves. We’re going to get the job of the people done, and I will be working for you. You are my boss,” Lake said.

Neil Jones is a reporter for The Arizona Sun Times and The Star News Network. Follow Neil on Twitter. Email tips to [email protected].
Image “Kari Lake and Tulsi Gabbard” by Kari Lake.