Philadelphia’s Albert Greenfield School will host Drag Queen Story Hour for first-graders in order to provide “an energetic, diverse, and inclusive story hour,” an email to parents reported by Libs of TikTok stated.

According to the email, published Wednesday, an individual from the K-8 public school informed parents:

Your child’s classroom will be participating in the Drag Queen Story Hour! Drag Queen Story Time is a program created by Philly’s Queen Brittany Lynn with the help of child educators from the city’s top museums and schools.

“Drag Queen Story Time promotes literacy to children of all ages with style, flair, and creativity,” the email claims, “while reading stories about love, diversity, and acceptance.”

“Drag Queen Story Time won the title of ‘Best Community Builder’ from Philadelphia Family Magazine in 2019 and ‘Family Favorite Program’ in 2021,” the school’s email sender boasted, adding, “The date and time will be set up in the coming weeks.”

Parents are informed that, if they “have any further questions,” they can contact the school “for more information,” but they are not informed whether hey can opt their children out of the program.

“We look forward to providing an energetic, diverse, and inclusive story hour that celebrates every type of family,” the email letter ends, and is signed “The Greenfield Team.”

The website of “Brittany Lynn,” who is Ian Morrison, is titled “Philly Drag Mafia,” and features what amounts to a promotional Fox 29 Philadelphia video of Morrison preparing for his drag queen performance to young children during pride month at Philadelphia’s Please Touch Museum, where he is shown getting “choked up” when he reads about two men getting married.

Morrison is heard saying in the video LGBTQ pride month “is being able to wake up and show the world who I am, without backlash.”

“Greenfield school and schools across the country are holding parents hostage to their desired agenda by creating an atmosphere of fear,” Libs of TikTok commented. “Parents are afraid to speak up. One Philadelphia parent told Libs of TikTok that it feels like she is in a ‘war zone with no allies.’”

Los Angeles-based psychiatrist Dr. Mark McDonald, author of United States of Fear: How America Fell Victim to a Mass Delusional Psychosis and Freedom from Fear: A 12 Step Guide to Personal and National Recovery, told The Star News Network in an interview the practice of Drag Queen Story Hour for young children is “perverse”:

I find it troubling, and ironic, that we are not allowed to sexualize adults, particularly women, because it’s considered to be objectification, immoral, etc., etc., but we are encouraged to sexualize children. This is perverse. I believe it’s diabolical. I believe that it’s actually an expression of evil. A society that is sacrificing its children, both sexually and medically, for the sake of the supposed benefit of the parents or the adults is not a society that is living in a state of grace. It’s been infected. It’s been taken over by a pandemic of evil. I cannot explain it any other way.

“I don’t see the pressure to take a toddler to a drag queen story hour,” McDonald continued. “I’m sure there’s some social pressure but I find it hard to believe that that alone is what’s driving this. There’s something very perverse, I would say, something sadistic.”

“With a predator, you can explain this as a sort of sociopathic sickness,” he noted. “You know, they’re attracted to children. But the parents aren’t attracted to their children. That’s not the reason they’re exposing them to perversion intentionally. And, then, they’re enjoying it. It’s done by choice.”

Libs of TikTok reported the response received from the School District of Philadelphia regarding the event, which indicated parents may opt their first-graders out – though no opt-out was mentioned in the email sent out to parents:

The School District of Philadelphia is proud to collaborate with a variety of community partners to provide an array of events and opportunities. We are committed to teaching inclusivity and acceptance to create positive academic, social and emotional outcomes for our students.

The drag queen story hour, a popular event throughout the City of Philadelphia, is designed as a creative outlet and intended to inspire and uplift students. This has not yet been scheduled with Albert M. Greenfield School. Our schools have an open line of communication with families so information about the event was shared with parents to allow an opportunity for questions. Like any external event or program that is held at school, participation is not required and parents have the opportunity to opt-out. 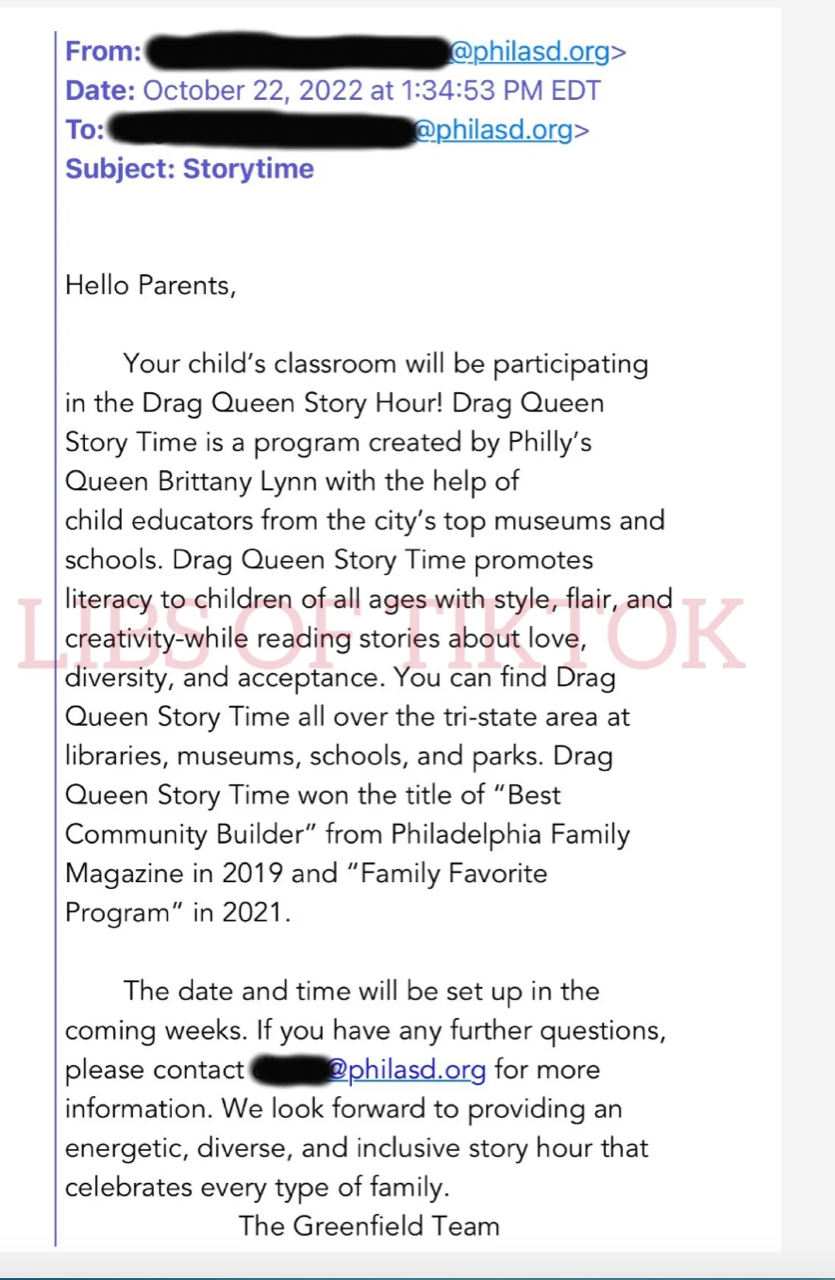 The Star News Network reached out to the Albert Greenfield School for further comment and is awaiting a response.