The Olympia school district in Washington State appointed a woman to the city school board who, in July 2021, was recorded in a video speaking to a crowd at the state capitol as she shouted “f**k the police,” called the police “pigs,” and urged the crowd to “tear everything up in this “f**king city.”

The school board unanimously agreed to appoint Talauna Reed to fill the director vacancy in District 2 following the resignation of Justin McKaughan at the end of August, a press statement said, and added:

Reed is the Lead Outreach and Advocacy Navigator at Interfaith Works where she works with unhoused community members. In that capacity, Reed facilitates training in Cultural Diversity, de-escalation, restorative justice models, anti-racism and trauma-informed care across multiple organizations and in collaboration with other Thurston County providers. She facilitates meetings in the community where she educates audiences with tools for dismantling white supremacy in order to create a more equitable society. 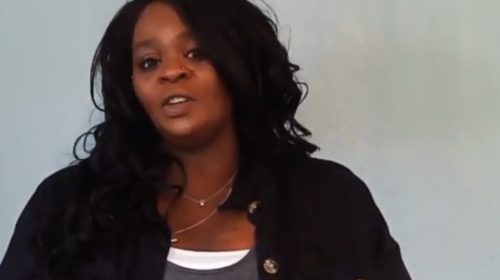 According to the press release, Reed’s two children attended Olympia schools. She has a bachelor’s degree in organizational management and, in 2020, was named a Womxn of Achievement by the YWCA, an organization whose focus is racial and gender justice.

As Fox News reported, the Olympia school board said Reed was selected because of the content of her answers throughout the interview process, and “her advocacy and experience working with underserved members of our community.”

“During the interview process she showed herself to be a committed and thoughtful advocate for the students of our school district,” the board stated. “We look forward to working with her to address pressing equity and inclusion issues in our school district. We believe she’ll be an important voice and partner moving forward.”

Reed, who was sworn in Thursday, was the focus of a video recording made in July 2021 that has been shared online since her appointment to the school board.

During a recent event, Reed began her speech by saying “F-ck the police” then called on individuals to “tear everything up in this f-cking city.” pic.twitter.com/yjumP93OpY

While addressing a crowd in the video, Reed yelled “f**k the police,” and then urged attendees to say the names of Breonna Taylor and Yvonne McDonald who, Reed alleged, were “both black women” who “were murdered by the f**king police.”

Taylor was a 26-year-old black emergency medical worker who was killed by police in March 2020 during a “no-knock” drug raid on her home, while McDonald was Reed’s aunt, age 58, who was found dead by a street sweeper in 2018.

“It amazes me how those pigs can sit over there to watch us peacefully … talk about what we want changed in this state,” Reed continued in the video. “And they don’t pay attention until we tear s**t up. So, before I get started, tear everything up in this f**king city until they do what we want them to do.”

Following her swearing-in ceremony, Reed said that those with concerns about her appointment had a right to express them during public comment, just as it was her right “to oppose police brutality,” as reported by Fox News.