Based on a misunderstanding of new FBI data, NewsNation is reporting that 14,677 murders occurred in the U.S. during 2021, a supposedly large decline from 2020. In reality, that figure is far from complete, and comprehensive records from death certificates show that about 24,493 people were murdered in 2021. This is about:

Murders have become so common over the past two years that if the murder rate remains at the 2021 level, one out of every 179 people in the U.S. will eventually be murdered. Yet, certain politicians and media outlets are downplaying this bloodshed, while others are blaming it on Covid—a claim at odds with the facts.

A major source of confusion about this issue is the FBI, which is releasing fragmentary and inaccessible data on murders and other crimes. The FBI is part of the U.S. Department of Justice, which is under the authority of President Biden.

In 2021, the year Joe Biden became president, the FBI began making it far more difficult to access national estimates of murders and other crimes. The agency did this by dramatically changing the manner in which it reports such data.

Every year for more than eight decades, the FBI has published a report titled “Crime in the United States” which contains national crime estimates for the previous year. Before 2021, the FBI published this report with a simple overview page containing links like “Violent Crime,” “Property Crime,” and “Homicide.” These led to webpages with clear summaries and straightforward datasets for such crimes.

Since 2021, the FBI has published those reports only via a “Crime Data Explorer” which contains a maze of vaguely worded links, drop down menus, and acronyms. To locate the FBI’s estimate of murders for 2021 with this system, readers must:

Nevertheless, the FBI claims that its Crime Data Explorer enables “law enforcement and the general public to more easily use and understand the massive amounts” of crime data it collects. Belying that statement, Google shows that only five news outlets have reported the fact that the FBI’s 2021 estimate for murders ranges from 21,300 to 24,600. Moreover, two of the outlets obtained these figures from two of the other outlets, not from the FBI. The sole place where the FBI reveals these figures is in the above-mentioned buried report.

So where did NewsNation obtain the much lower figure of 14,677 murders in 2021? From an easy-to-access webpage on the FBI’s Crime Data Explorer. Specifically, NewsNation linked to a page that can be accessed by clicking the first prominent link on the home page of the Crime Data Explorer and then clicking on “Expanded Homicide Data.” This leads to a webpage with a chart showing 14,677 murders in 2021, a large decline from 2020, just as NewsNation reported: 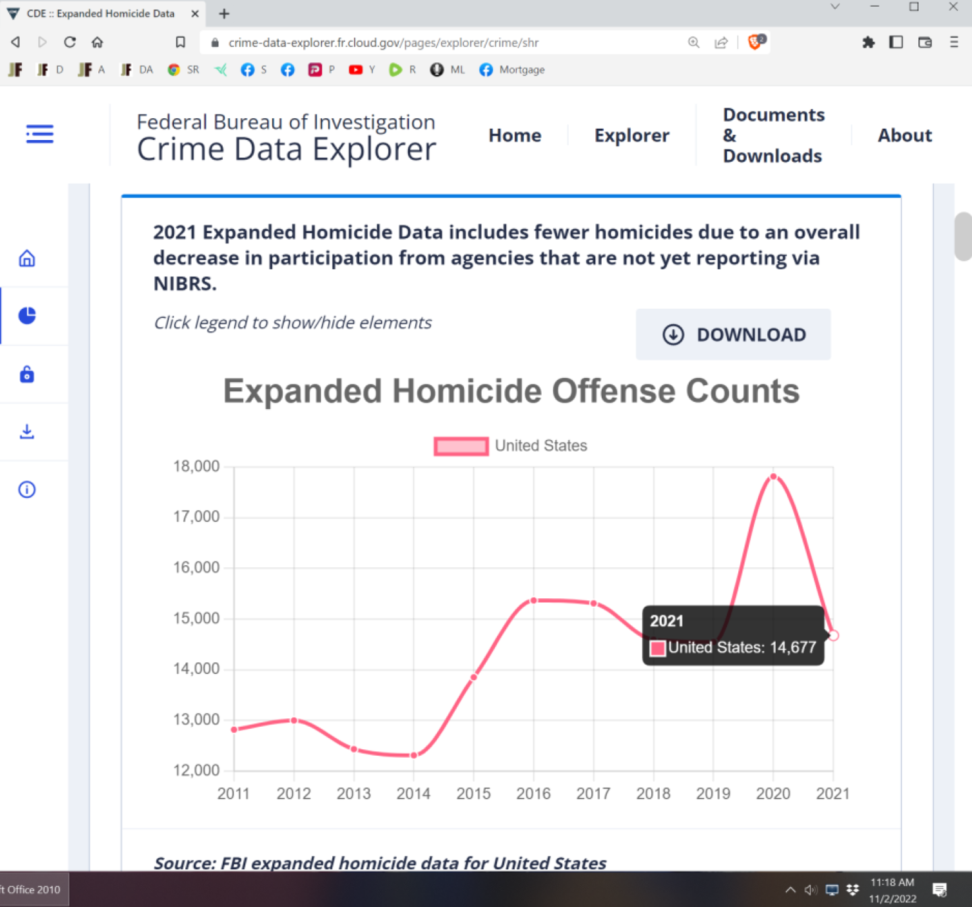 The FBI’s webpage contains two notes above the chart indicating that it shows incomplete data, but these caveats may not have been direct enough for NewsNation to fully grasp them:

The fact that this incomplete data can be accessed so easily may have also led NewsNation to assume it was complete.

Supposedly, “No One Knows”

Compounding the confusion, the FBI switched to a new crime measurement system in 2021 which is leading journalists to report that there is no way to know if murders increased from 2020 to 2021. This new system is reliant upon electronic submissions from local and state law enforcement agencies, and many of them are not using it yet.

Non-reporting agencies cover 35% of the U.S. population, including the nation’s largest cities—New York and Los Angeles. Thus, the FBI explains that its crime estimates for 2021 are based on a “complex estimation process to account for unreported data” to “bridge this gap.”

That is why the FBI’s murder estimate for 2021 ranges from 21,300 to 24,600, an enormous uncertainty of 3,300 murders. Without quantifying this margin of error, the FBI issued a press release in October 2022 that provides a mid-point estimate for murders near the bottom of the release. There, the FBI states that:

The FBI published a similarly worded crime summary in the same month, buried in an accordion menu of its Crime Data Explorer.

As a result of this uncertainty, news outlets that have managed to find the FBI’s homicide estimates for 2021 have made statements like these:

In reality, however, we do know that murders rose because there is a more reliable source for this data than the FBI.

The broadest measure of homicides in the U.S. is death certificates, which are commonly completed by medical examiners or coroners. As explained by the Department of Justice in a 2014 report, death certificates provide “more accurate homicide trends at the national level than” FBI data because:

The report concludes that the death certificates “consistently” show “a higher number and rate of homicides in the United States compared” to the FBI data, “likely due to the differences in coverage and scope and the voluntary versus mandatory nature of the data collection as described above.”

The FBI tries to account for incomplete coverage by estimating the number of murders that aren’t reported to the FBI, but over the past decades, this process has yielded about 1,500–2,700 less murders per year than homicides listed on death certificates: 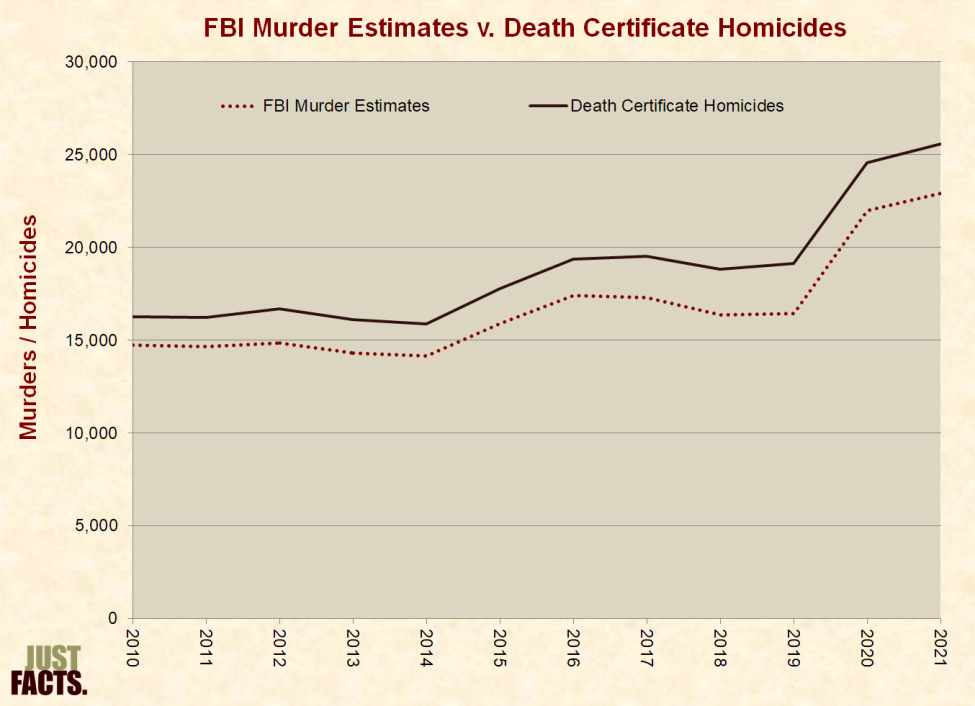 On the other hand, death certificates tend to overcount murders because they include justifiable homicides by civilians acting in self-defense, which are not murders. Such cases amounted to about 2.5% of homicides in 2015–2019.

Death certificates also include some justifiable homicides by police, even though these are supposed to be coded as “legal intervention deaths,” not as homicides. A study of 16 states during 2005–2012 suggests that such miscoded cases accounted for roughly 1.7% of homicides.

If the two rates above are currently applicable to the nation as a whole, the actual number of murders is about 4.2% less than the number of homicides recorded on death certificates.

Homicide counts from death certificates are published by the CDC via two online data extraction portals. Both of these report 24,576 homicides in 2020, but they don’t yet present data for 2021. However, another CDC portal provides provisional homicide rates through 2021, reporting 7.5 homicides per 100,000 people in 2020 and 7.8 in 2021. Combining these three figures yields 25,559 homicides in 2021.

Removing justifiable homicides to obtain an estimate of actual murders, about 24,493 people were murdered in 2021. This is about 1,000 more murders than in 2020, a 5% increase on top of a 28% increase the year before that.

To provide a sense of scale for this bloodshed, one out of every 179 people in the U.S. will eventually be slain if murders remain at the same rate as 2021.

Even in previous years when murders were much less common, the lifetime likelihood of murder was so shocking to some people that they sent repeated emails to Just Facts insisting it was wrong. Yet, the methodology used by Just Facts to compute this figure was developed by a licensed actuary, double-checked by a Ph.D. mathematician, and triple-checked by a Ph.D. biostatistician.

In other words, the numbers are correct, but some people’s perception of the problem is disconnected from reality. Beyond NewsNation, others who have recently downplayed the severity of crime in the U.S. include but are not limited to President Biden, Congresswoman Alexandria Ocasio-Cortez, Joy Behar of ABC’s The View, and the New York Times (Hat Tip: Tim Graham).

All of those individuals and organizations are proponents of the notion that the U.S. doesn’t have a severe crime problem but is simply too hard on crime. Hence, they argue that reducing arrests, eliminating bail, and lessening jail terms will make America more just without making it less safe.

That agenda has been rapidly advanced by the Black Lives Matter (BLM) movement since the death of George Floyd in May 2020, and murders have soared. In 2021, the U.S. murder rate was even worse than in 2001 when America was attacked by terrorists who slaughtered 2,977 people: 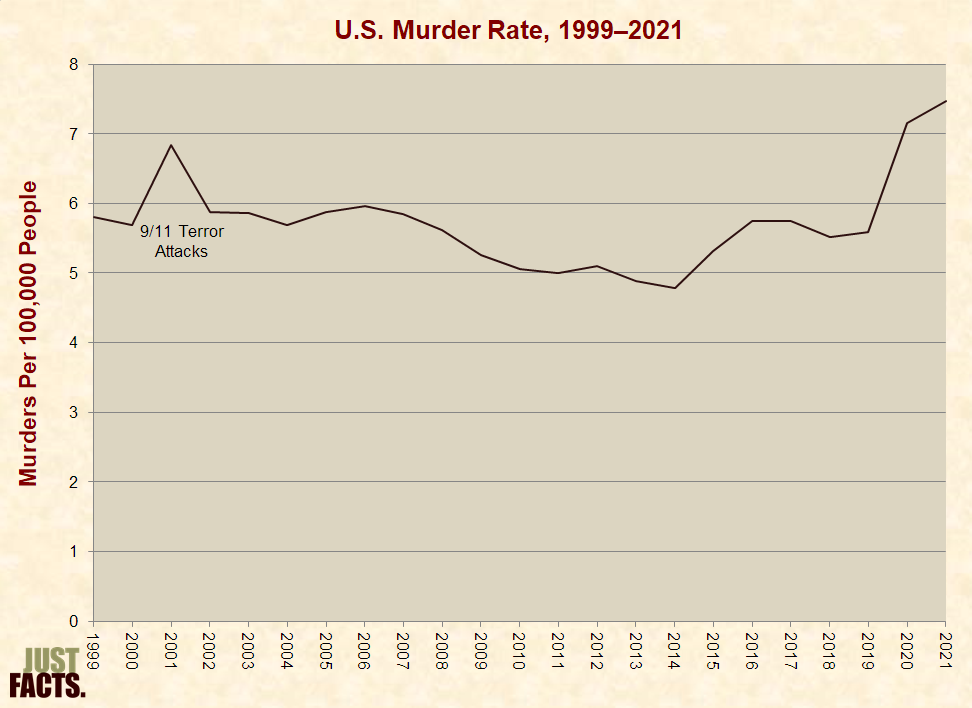 Because correlation does not prove causation, one cannot assume the BLM movement is the cause of these increased murders. However, other facts detailed below reveal that this is a distinct possibility—and far more likely than the common journalistic explanations for this carnage.

Many media outlets have implied or explicitly reported that the massive increase in murders over the past two years is largely due to the Covid-19 pandemic. A small sample includes the New York Times, Politico, Axios, CBS News, and CNN. This claim, however, is at odds with two key facts.

First, it is based on the childish notion that correlation proves causation, a fallacy that high schoolers are taught to avoid. This is because the occurrence of two events in the same year can be a mere coincidence or caused by numerous other factors. A failure to recognize this reality is a common feature of junk science and political propaganda. In the words of an academic textbook about analyzing data:

Association is not the same as causation. This issue is a persistent problem in empirical analysis in the social sciences. Often the investigator will plot two variables and use the tight relationship obtained to draw absolutely ridiculous or completely erroneous conclusions. Because we so often confuse association and causation, it is extremely easy to be convinced that a tight relationship between two variables means that one is causing the other. This is simply not true.

Second, there isn’t even a correlation between the Covid-19 pandemic and murders. This is evidenced by:

In stark contrast, the same study found that the timing of the 2020 murder surge in multiple major U.S. cities can be pinpointed to “the death of George Floyd” and the “subsequent antipolice protests,” which “likely led to declines in law enforcement.” Floyd died on May 25, 2020, but the pandemic began more than two months earlier on March 11.

Similar results have been found by other studies which have examined murder increases in the wake of analogous events like the protests and riots that occurred over the police killing of Michael Brown in 2015.

One of the most telling of these studies was conducted by Ph.D. sociologist Richard Rosenfeld, former president of the American Society of Criminology. An article in The Guardian explains the implications:

For nearly a year, Richard Rosenfeld’s research on crime trends has been used to debunk the existence of a “Ferguson effect,” a suggested link between protests over police killings of black Americans and an increase in crime and murder. Now, the St. Louis criminologist says, a deeper analysis of the increase in homicides in 2015 has convinced him that “some version” of the Ferguson effect may be real.

“The only explanation that gets the timing right is a version of the Ferguson effect,” Rosenfeld said. Now, he said, that’s his “leading hypothesis.”

Another common explanation for the murder increase is recent rises in gun sales, but this notion doesn’t hold water. Cassel’s study examined this possibility and found that the increases in firearm purchases don’t accord with the murder surges in time or place. He also notes that:

the United States already has a huge number of firearms in private hands—about 400 million by some measures. Against this backdrop, a recent increase of 2 million gun sales (about 0.5% of the total) seems like a poor candidate for explaining sudden and dramatic changes in homicides