An Oregon school district superintendent has dismissed the concerns of parents and students that a high school English teacher’s whiteboard containing insulting descriptors of white girls and boys was simply part of a class discussion about “untrue stereotypes” and “implicit bias.”

“This week in the Scappoose School District, a photograph was shared out of context of a robust lesson in a high school English class,” wrote Scappoose Superintendent Tim Porter. “In order to ensure transparency and support for teachers and students in our district, we wanted to provide accurate information about what happens in our classrooms when we teach about topics like stereotypes and ‘implicit bias.’”

As Libs of TikTok reported Wednesday, freshman students in Autumn Gonzales’ English class who walked into their classroom at Scappoose High School in Oregon found two columns on the whiteboard, one labeled “White girls” and the other “White boys.” 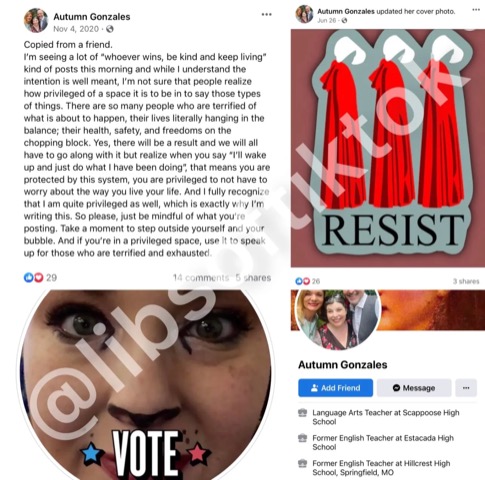 Under the “White girls” column were these descriptors: 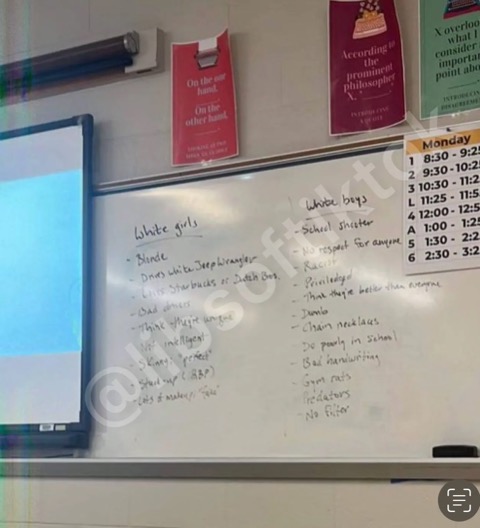 Libs of TikTok corresponded with some individuals from the school:

According to one student who spoke with Libs of TikTok, “the students were in there for a few minutes and all were looking at the board, not only in disbelief but shock. Several of them took pictures.” Before Ms. Gonzales came into class, the students started asking lots of questions amongst themselves. When Ms. Gonzales entered the classroom, one student raised her hand and asked, “What is the context of the writings on the board?”  Ms. Gonzales allegedly told her “to mind her own business.”

When students persisted in asking questions, Gonzales reportedly claimed the two lists were on the board left over from the previous class discussion about “suggestions for a possible play at the school.”

In his letter dismissing the concerns, Porter said a teacher had provided a “piece of media,” in this case “the play ‘Twelve Angry Men,’” to discuss “biases that people have based on others’ identities.”

“This presented an opportunity to talk about untrue stereotypes, which were generated by students and listed on a whiteboard,” Porter said. “This type of conversation allows students to understand how stereotypes based on race and gender can be hurtful and pervasive in the world around us.” 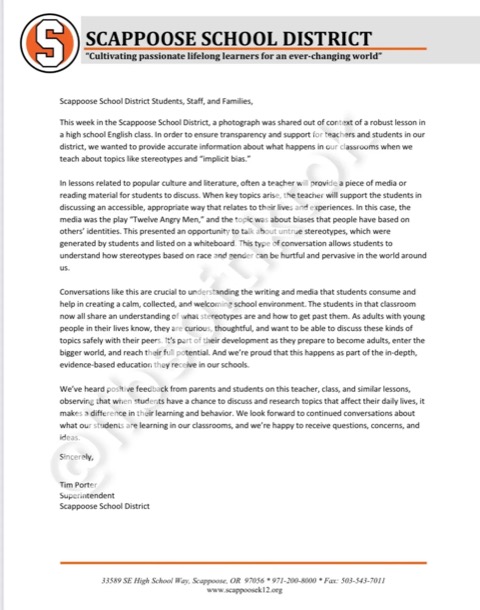 The superintendent said such “conversations” are “crucial to understanding the writing and media that students consume and help in creating a calm, collected, and welcoming school environment.”

Students and their parents, however, did not find the words on the whiteboard to be a vehicle for achieving a “welcoming school environment.”

After hearing about the contents on the board, one of the parents immediately contacted the school, forwarded the image, and asked for a call from Principal Jerimy Kelley. The parent told us, “I received a call back from Mr. Kelley approximately two [hours] later, he admitted that he had no less than 25 emails and or messages left about the situation. I asked him why this would be discussed, let alone written up on the whiteboard for all to see in an English class. He had no reason, and said it will be looked into immediately.”

“Three days later, after several emails, requests for students to be transferred out of Ms. Gonzales’ class, and demands for her resignation, the school superintendent sent out an email to parents excusing the situation as a teaching exercise in ‘stereotypes and implicit bias,’” the report noted, adding that, based on Gonzales’ Facebook profile, she is reportedly an “activist” whose social media contains politically charged posts, with topics that included “privilege” and her personal fear regarding the outcome of the 2020 election.

“Could you imagine the outrage that would be coming from the entire nation if the words on Gonzales’ whiteboard were used to describe any other group?” Libs of TikTok asked. “Why are we tolerating anti-white racism? Tragically, anti-white racism is all too common in our classrooms. Progressive teachers that push their radical ideology, like CRT into our schools need to be fired.”

In March, the Scappoose school board unanimously dismissed a complaint against Porter after his letter to the community alleging adults were “verbally assaulting” students and blocking their path to school while protesting his COVID-19 mandates, Pamplin reported.

The complaint asserted Porter “disparaged a great number of parents and community members … it appears he made these declarations to intimidate and discredit all those participating in a peaceful rally”:

Many of us, along with some of our own children, were on the sidewalks on the morning of Oct. 18 at a rally standing up for the constitutional freedoms of our children, parents, teachers and community. Everyone made an effort to be kind, say hi and step out of the way for students passing by.

The complaint continued one child made a negative comment, but added, “the only confrontation was from your very own school employee threatening a parent, in which there is video recording and several witnesses.”

Citizens who filed the complaint requested the school board conduct an investigation into Porter’s allegations against members of the community if he refused to rescind his comments.

Regarding the complaint, the school board decided no further action was warranted.

The Star News Network reached out to Superintendent Porter for comment but received no response.