Correspondence from Arizona’s Office of the Attorney General months before the November 2022 general election warned of issues with Maricopa County’s signature verification of mail-in ballots.

The first letter came from Attorney General Mark Brnovich on April 16. It was directed to State Senate President Karen Fann as an interim report of the Maricopa County November 3, 2020, general election.

In addition to five other election-related issues for which Brnovich had specific recommendations for the legislature to enact to increase assurance in the integrity of Arizona elections, Brnovich dedicated a significant portion of his report to the topic of early voting signature verification.

An early ballot is not complete and cannot be counted unless and until it includes a signature on the ballot affidavit, Brnovich stated in the context of Arizona state law.

As further required by state law, it is the county recorder or another officer in charge of elections who must compare the signature on the affidavit with that in the voter’s registration record.

It is the determination of the election official as to the signature match that results in whether the ballot is counted or not.

State law has no provision for anyone other than the county recorder or other elections officer to perform the signature verification, much less a third party or artificial intelligence (AI).

The topic of the use of a third party and AI for signature verification was addressed a few weeks later by the attorney general’s office.

“Signature verification is the only safeguard to assure each early ballot is cast by an eligible voter,” said Wright.

Wright, on behalf of lawmakers and voters, questioned how Maricopa County staff and temporary employees are expected to perform a meaningful analysis of 500 signatures per hour without error.

As Wright continues her letter, the speed at which the signature verification is conducted seems to be revealed.

The ballot packets are stored at Runbeck awaiting disposition by elections workers, according to the Maricopa County Elections Department 2022 Elections Plan for the August primary and November general elections.

Using a third-party vendor and certification of their equipment for signature verification does not appear to be contemplated in the Arizona Elections Procedure Manual, The Arizona Sun Times reported.

But, as Wright pointed out in her letter, Runbeck’s role goes far beyond scanners and equipment to transmit images of ballot signatures to Maricopa County for verification.

Maricopa County contracted with Runbeck to use their “Verus Pro” AI system for the vendor to perform the signature verification.

Based on internal emails, according to Wright, Runbeck was provided exemplars from Maricopa County’s voter registration file as reference signatures for Runbeck to compare against signed ballot affidavits.

Indeed, Runbeck’s website regarding the Verus Pro automated signature verification says that it “integrates” with the jurisdiction’s voter registration system, from which the signature image is displayed and matched to Runbeck’s newly captured image from the current ballot.

“Undoubtedly, this process injects a controversial element into signature verification by assigning confidence levels and then automatically batching each signature into either ‘high’ or ‘low’ confidence batches based off of an undisclosed criterion. It’s hard to believe human verifiers disregard batch assignments, despite Maricopa’s assertions to the contrary. Notably, internal emails specify that staff was actually trained to analyze low and high confidence batches differently.” 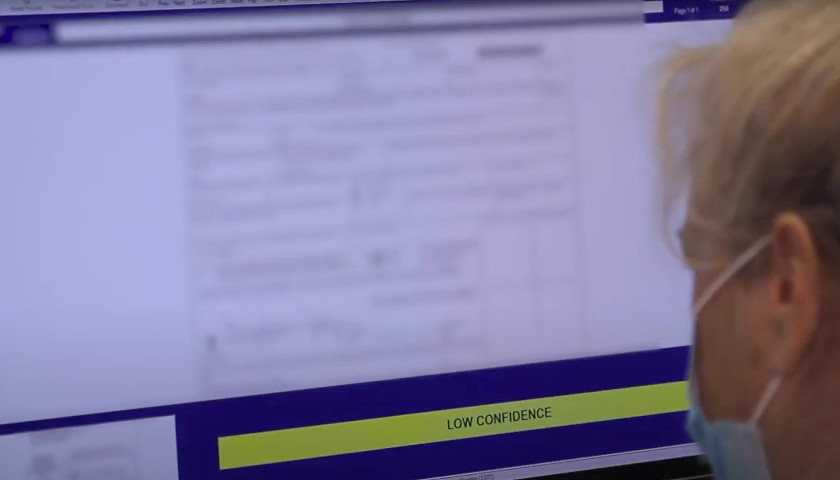 A screen capture of a video posted by the Maricopa County Election Department to YouTube regarding early ballot signature verification during the 2020 election demonstrates the “low” confidence flagging by Runbeck’s AI system that Wright calls out.

Improper signature verification by Maricopa County is the basis of a lawsuit filed by Arizona State Senator Sonny Borrelli and Mohave County voters. The complaint names as defendants Secretary of State Katie Hobbs as well as Maricopa County Recorder Stephen Richer, the five members of the Maricopa County Board of Supervisors, and Director of Elections Scott Jarrett.

The suit says that there were multiple systemic failures in the conduct of the election in Maricopa County, “including the County’s improper and unauthorized delegation of its responsibilities to opaque, unproven software programs that improperly but unavoidably influenced the judgment of poorly trained workers tasked with signature verification, in violation of Arizona statutory law, the voting strength of residents of Mohave County, Arizona, was diluted and their Constitutional rights were violated.”

The plaintiffs request the court declare it impermissible and unlawful to use unproven and opaque third-party software for ballot signature verification, unconstitutional under the equal protection clause of the 14th Amendment of the U.S. Constitution and unlawful under Arizona statute.

It also requests invalidation or setting aside of the November 8, 2022, general election results for the gubernatorial race in Maricopa County and/or the mail-in ballots from that election.

Laura Baigert is a senior reporter at The Star News Network, where she covers stories for The Arizona Sun Times and The Tennessee Star.
Photo “Mark Brnovich” by Mark Brnovich. Background Photo “Courtroom” by Carol M. Highsmith.