The liberal voting activist group that dumped $350 million of Facebook founder Mark Zuckerberg’s money on local election offices during the 2020 presidential election is back again with another $80 million to give over the next five years.

And Wisconsin once again will be front and center in the Center for Tech and Civic Life’s “generosity.”

The Chicago-based (CTCL) says 10 county and municipal election offices will be part of the first group to receive grants under the center’s Alliance for Election Excellence, according to the Associated Press. Madison will be in the first wave.

Madison was among the so-called “Wisconsin-5” cities that received $8,488,873 in CTCL’s so called “Safe Elections” grants, about 84 percent of the private COVID relief money the group paid out to Wisconsin communities in 2020. The five cities — including Milwaukee, Green Bay, Kenosha and Racine — are Wisconsin’s biggest and most Dem-heavy population centers in a battleground state that was critical in the bitterly contested election.

Democrat Joe Biden beat Republican President Donald Trump by a scant 20,600 votes. CTCL’s activist network, richly funded by Zuckerberg and his wife, played a key role in Biden’s narrow victory in the Badger State and other purple states such as Georgia, Arizona, and Nevada.

The center claims there’s no Zuckerberg money in this round of grant funding, but many of the liberal voting activist groups are still involved. 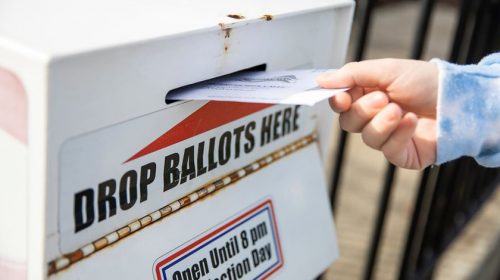 “The depressing thing in the whole process is … not one person from the Wisconsin-5 cities had to show up and explain any of those things,” said State Rep. Janel Brandtjen (R-Menomonee Falls), who chaired the Assembly committee that has investigated the many irregularities and broken laws in Wisconsin’s 2020 elections. “No one was ever held responsible. That’s what I hear from people all the time.”

Gov. Tony Evers, a far left Democrat, told city clerks in the cities to lawyer up. They did, openly defying subpoenas from special counsel and former state Supreme Court Justice Michael Gableman. Yet, clerks in Madison and Milwaukee readily and quickly complied with subpoenas issued by Biden’s Department of Justice seeking communications involving Trump, his campaign and his allies who questioned the results of the election.

“The point of our subpoenas was always to have conversations (with election officials) about what happened in 2020. Now, the subpoenas are treated in a different manner if they come from the right side of the aisle,” Brandtjen said.

But documents show Green Bay in particular allowed liberal activists and a long-time Democratic Party operative to be embedded in election offices. As Wisconsin Spotlight reported in a series of investigations, former Obama campaign staffer and Democrat activist Michael Spitzer-Rubenstein was engaged in about every aspect of Green Bay election administration, including his offer to “cure” or correct absentee ballots. Emails show he held the keys to Green Bay’s ballot storage location on Election Day.

And many of the same liberal players are still leading the Center for Tech & Civic Life’s local election grant program. At the top is Tiana Epps-Johnson and Whitney Mays. They are alums of the hyper-partisan progressive campaign operative training group the New Organizing Institute (NOI) who founded the Center for Tech and Civic Life and developed contracts binding Wisconsin election officials to implement CTCL’s Get-Out-the-Vote (GOTV) strategy. For years leading into the 2020 cycle, Obama darling and Fellow Epps-Johnson and Mays hosted Ballot Data Convening events partnering with Democracy Fund, Google, Microsoft, Facebook, the Princeton Gerrymandering Project accused of faking redistricting data to benefit Democrats), the League of Women Voters, and We Vote (which collects personal data on issues including climate change and animal rights.)

AP reported the new round of CTCL grants will vary based on the size of each jurisdiction, from $50,000 for those with fewer than 5,000 registered voters to $3 million for those with more than 1 million voters. The first offices will receive grants over a two-year period leading up to the 2024 presidential election, Epps-Johnson, the center’s executive director, told AP.

There are virtually no restrictions on how the money can be spent, worrisome to those who believe the last round of “Zuckerbucks” corrupted election integrity.

“It seems like this entire process will occur behind the scenes with no guardrails or transparency, furthering the concerns of voters over undue influence on the conduct of elections,” Hayden Dublois, a researcher at the Foundation for Government Accountability, told the Associated Press.

CTCL says it will not operate in the states where Republicans enacted legislation barring private money in election administration. In Wisconsin, the Republican-controlled Legislature did just that, only to be stopped by Evers’ veto pen.

“Elected officials should not be able to abuse their power to cheat or control the outcomes of our elections or to prevent eligible voters from casting their ballots,” Evers said in his veto message after killing several election integrity bills, including the measure that would have barred groups like CTCL from funding election offices.

Many Wisconsin voters believe activist groups infiltrating local elections is an abuse of power “to cheat or control the outcomes of our elections.”

So Evers’ veto leaves the door open for private money — from left- and right-leaning groups — to be used in Wisconsin’s elections.

Madison Deputy Clerk Jim Verbick told AP he saw joining CTCL’s U.S. Alliance for Election Excellence as a way to stay current on how other election officials are operating. He said his office will consider accepting grants and wasn’t worried about the city’s involvement drawing backlash.

“The issue has gone to the courts, and the courts have repeatedly said there was nothing wrong with the grants,” he said.

“Cities like Madison and Milwaukee continue to try to find ways to only engage with and turn out certain voters,” Vos said.

Brandtjen, who has battled with the speaker over the election investigations, says Republicans need to check the left’s election tricks at every turn.

“Legislators need to know their job isn’t just writing bills; they have subpoena power and they also have the ability to bring in and get explanations from any administration. We are the voice of the people,” said Brandtjen, who is running for the 8th Senate District Senate seat vacated by the retirement of long-time Sen. Alberta Darling (R-River Hills).

Reprinted with permission from Wisconsin Spotlight.