Kirk said that TPUSA is the most important conservative organization in the country since it accesses places where there aren’t many conservatives — college campuses. When TPUSA started, 47 percent of young people identified as liberal, he said. Now, that has dropped 13 percent to 34 percent.

He began his speech blasting the “totalitarian Marxist left” which wants “power, control, and submission.” Kirk discussed a recent speech he gave at the University of New Mexico, where “terrorists” tried to cancel him. He said the “paid activists” have a “really pleasant and joyful movement,” and that type of behavior is “why we are going to win.” 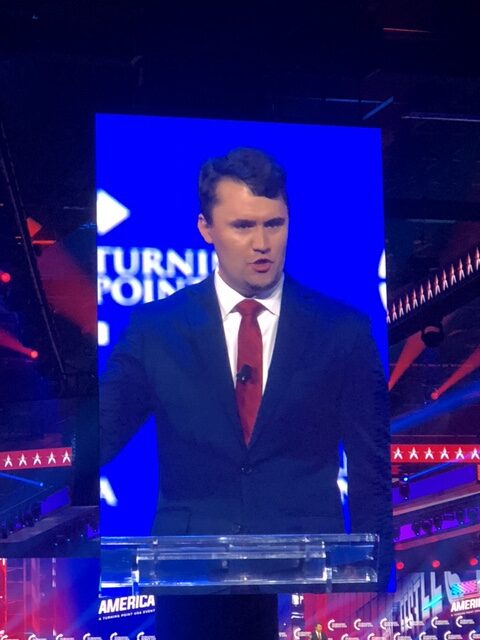 “We want kids to be kids again,” he lamented, declaring, “There is no debate about pedophilia, period, end of story.” Kirk said “common sense” is needed, not “a PhD in North African lesbian poetry.”

Kirk urged high schoolers to start chapters and relayed how the TPUSA pastors’ summit had over 400 pastors and their wives in attendance, focusing on “getting wokism out of church.” TPUSA recently launched Turning Point Academy, which provides a curriculum for homeschooling. He said many of TPUSA’s 20-something alumni have gone on to hold political office, including Anna Paulina who was elected to Congress in Florida and Austin Smith who was elected to the Arizona Legislature.

He reassured the attendees that even though it wasn’t a good year for political accomplishments, Twitter was “purchased and liberated from the Marxist Silicon Valley left.” He added, “Suppressing us is the only way they’ve been able to win.” Kirk advised, “The only way you beat the left is you never give up and you never give them an inch.”

Ingraham spoke next, beginning with a discussion about the botched election in Maricopa County. “Have they finished up all the ballot counting?” she asked. She said, “weird things happen here,” expressing concern that “we have to do elections the right way or we will never win again.” Ingraham said growing up she always knew who won on Election Day, and everyone voted on Election Day. 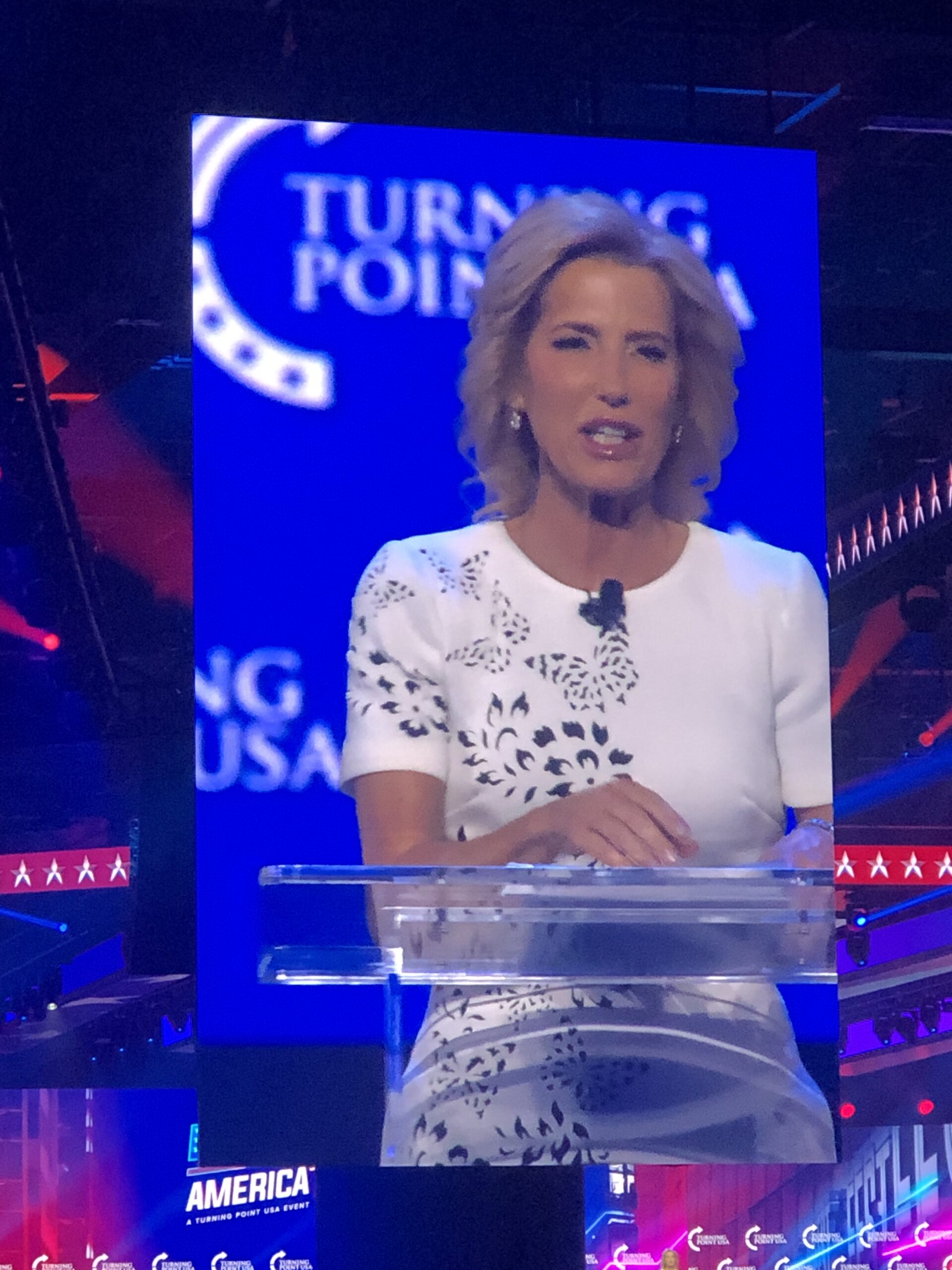 She called out the left for hypocrisy, claiming to be the “defenders of democracy” while they assert that the country is racist. She lamented, “It is now a thing to have ‘dragphobia.’” But “once they come for the children, game on.” She said the left is trying to turn children against their families and the country.

Ingraham went after the establishment, stating “make sure people are giving to the right groups,” not “D.C. think tanks.” “We’re up against a machine,” she warned. She noted how left-wing billionaire George Soros contributed $125 million to Democracy PAC. She criticized the name, “they take words and bastardize them.”

Ingraham said the left “measures the value of dollars by how many bodies they get to the polls.” She said the right needs to emulate this, “We need to get savvy in our media campaigns and get bodies to the polls.”

She expressed concern that the left “doesn’t criticize their candidates” unlike the right. She said newly elected Pennsylvania Democratic Sen. John Fetterman was a terrible candidate, but everyone on the left praised him as “great.” In Arizona, “Katie Hobbs was the greatest thing since sliced bread.” In contrast, on the right, former House Speaker John Boehner cried at House Speaker Nancy Pelosi’s retirement. “We celebrate with them to pay tribute to them after they lose,” Ingraham groaned. She expressed anger that many Republicans did not support Herschel Walker for Senate in Georgia, said she only saw Lindsey Graham standing up with him on the campaign trail.

However, she believes the left is promoting misery. “They think we’re living too well,” and would prefer the COVID-19 lockdown era, “happy with Zoom happy hours.” In contrast, for Ingraham that was “the most miserable I’ve ever been.” 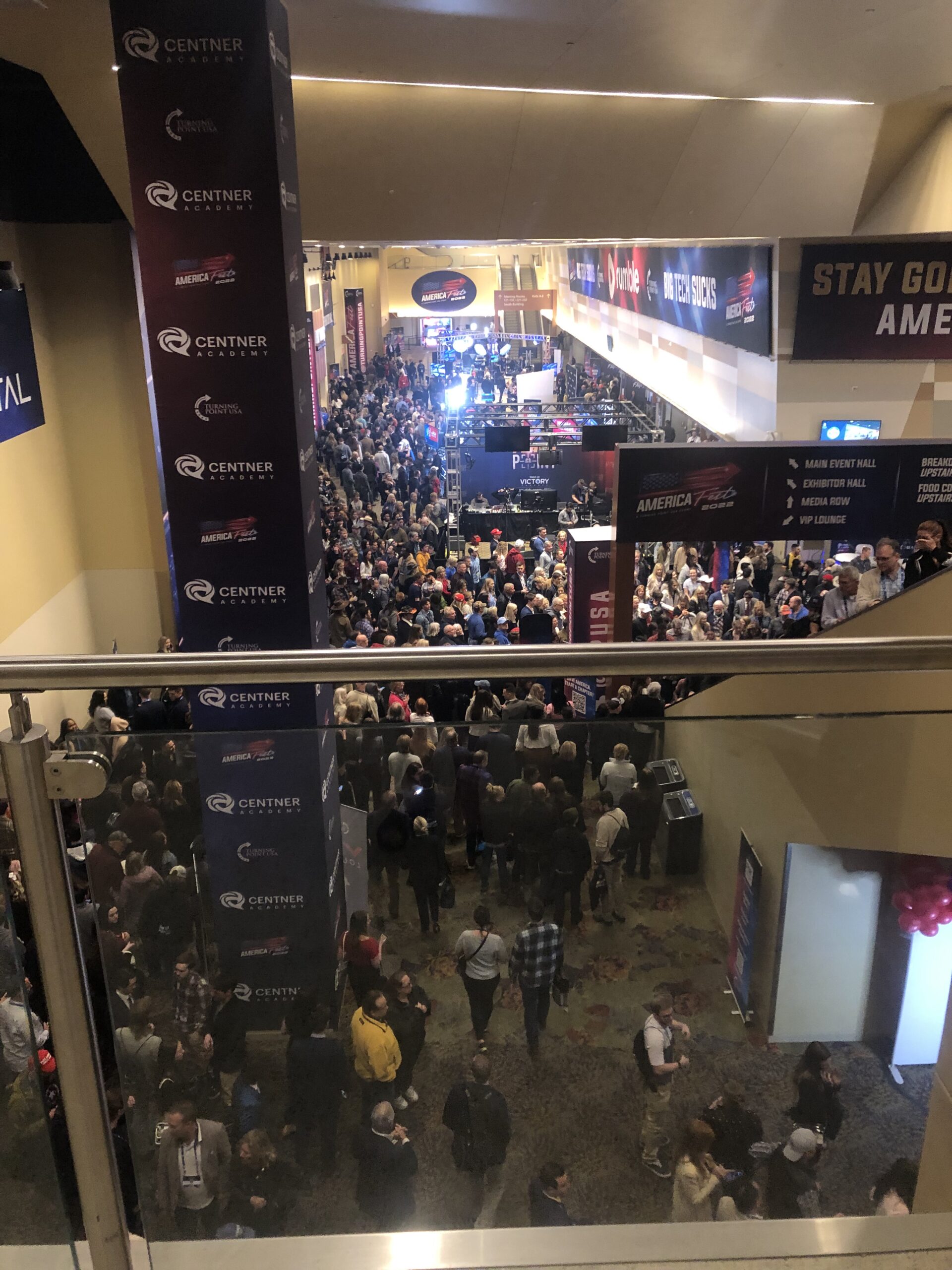 Ingraham criticized the money and troops sent to Ukraine under the Biden administration, pointing out that the U.S. is sending $100 billion while Germany is only sending $2 billion. “We’re carrying the load for Europe,” she said. “They don’t even really like us.” She said she’s sick of hearing the U.S. will be in Ukraine “as long as it takes,” reminiscent of the Vietnam War. “The only people who will end up better off are defense contractors and D.C. lobbyists,” she ranted.

Ingraham observed how establishment Republican leaders like George W. Bush, Mitt Romney, and John McCain have been rejected in recent years by Republicans. “Since 2008, Bush hasn’t spoken at a convention.”

Ingraham offered some advice, “Let’s make the Democrats the party of the slave camp, pro-war and pro-CCP.” She reminded attendees how Donald Trump was “the only president to see China for what it was,” adding that Chinese students who come to the U.S. to study may be required by the Chinese government to engage in espionage.

She praised Trump’s accomplishments placing conservative judges on the courts and successfully implementing the Remain in Mexico policy over Mexico’s protests. Ingraham recommended forcing a government shutdown over the border crisis, noting that 13-14 million illegal immigrants have come across the border recently, half the total that came over in the past 25 years. She pointed out the hypocrisy of the left in Martha’s Vineyard, which ushered out just 50 illegal immigrants within 24 hours of their arrival. 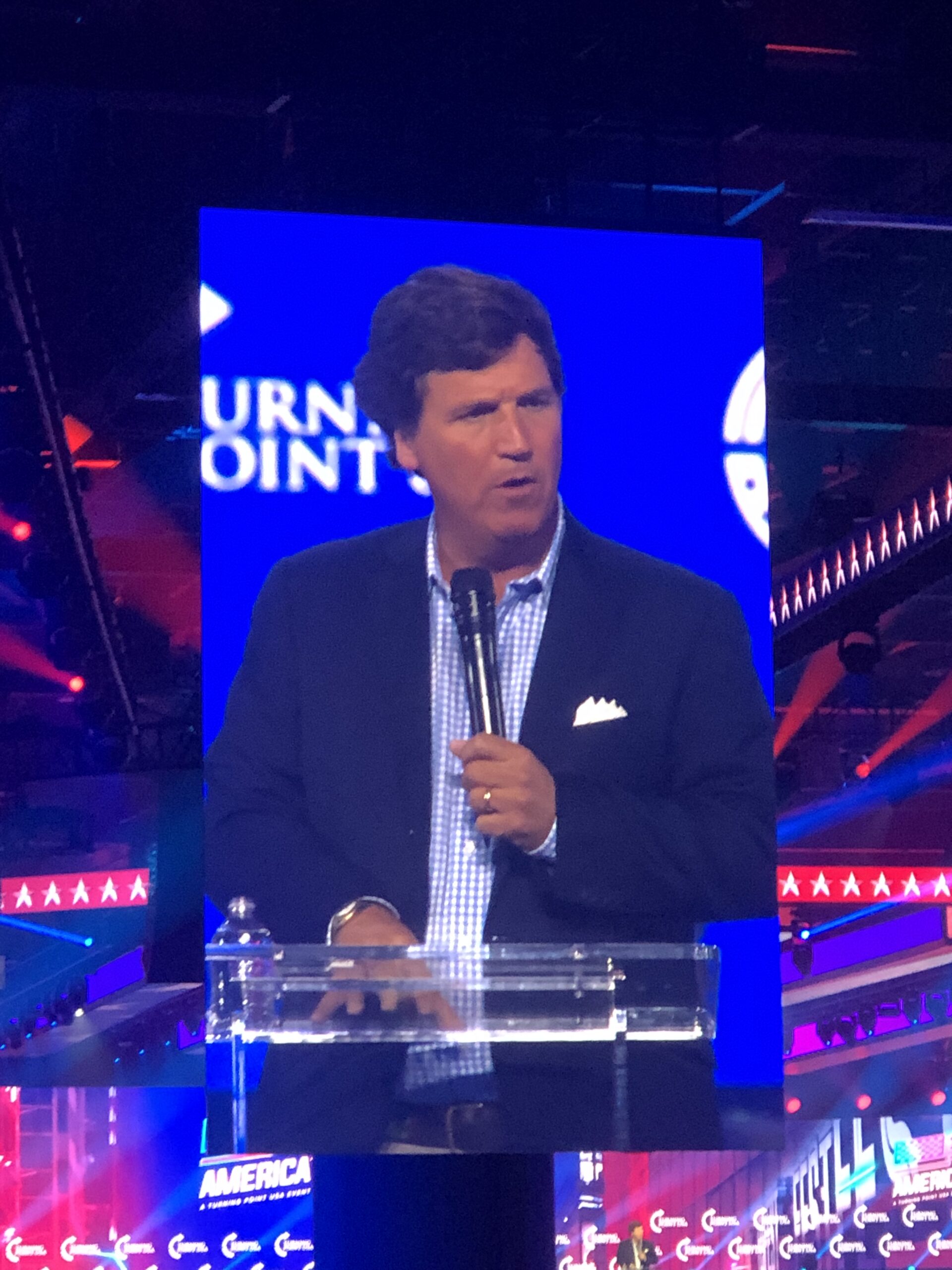 Carlson concluded the speaking, stating that the left isn’t “even pretending to make your life better.” He pointed out how in history, both the Republican Party and the Democratic Party attempted to convince Americans they would make their lives better. There is an exception, he said, which is the Democrats’ student loan forgiveness. “We will pay you to vote for us,” he described it. “That’s totally corrupt.”

He said what we’ve learned from the recent election is “we can’t predict events. When we say we have it figured out, we are lying to others.”

“There hasn’t been a secular society until now,” Carlson declared. Previously, kings ruled nations and believed they were ordained by God. Now, we have “leaders who don’t believe in God who think they are God.”

Carlson expressed concern about encouraging “children to mutilate their bodies” and said a trend started two years ago to advocate for abortion, not merely accept it as legal. He slammed Treasury Secretary Janet Yellen for helping ruin the economy then stating abortions will help the economy. He said we might as well make disgraced crypto CEO Sam Bankman-Fried the treasury secretary.

Pointing out that his dad was adopted, Carlson said, “if you really cared about the woman, you would say ‘what can we do to help you?’” He said it was “too dark” that Montana rejected a ballot initiative that would have allowed a baby to live if it survived a botched abortion. He also said there are similar concerns about Arizona’s election, “something else is going on,” since the voting machines didn’t work.

Carlson condemned chaos, noting that “bad ideas produce chaos, disorder, and ugly things.” He said “it’s an obligation to be cheerful.” He said “all wisdom is acquired” during “the lowest parts of your life,” and “suffering causes growth.” He ended with an endorsement of prayer, “because it works.”