Jennifer Wright, the Election Integrity Unit (EIU) civil attorney for Arizona Attorney General Mark Brnovich until his second term ended earlier this month, resigned before newly elected Democrat Kris Mayes took office. Still, there are reports in the media spreading that she was fired. Wright gave The Arizona Republic “notice and demand for a correction prior to filing legal action pursuant to A.R.S. 12-653.2.”

Wright said she believes the Mayes administration targeted her to set a public example of how political opposition will be treated under her administration.

“If it’s true that a Mayes ‘official’ twice confirmed the lie, this appears to be a clear message from Mayes that her administration will not let the truth stop them from maligning, discrediting, attacking, and using the full power of her office to take down those she sees as a potential threat,” Wright told The Arizona Sun Times.

Wright tangled with the Maricopa County supervisors and Maricopa County Recorder Stephen Richer many times, pointing out problems with the elections and demanding evidence and documentation. She asked the county four times to turn over information related to the Arizona State Senate’s independent ballot audit of the 2020 election, but all four letters were ignored.

Defamation attorneys are being consulted. The source in @krismayes's office that continues to lie that I was given an ultimatum better be prepared to testify in court with receipts (spoiler alert: there aren't any because it didn't happen).

Wright responded, stating the tweet was defamation and pointed out that she resigned before Mayes took office, citing her post on LinkedIn and records from the AGO’s HR. Mayes was sworn into office on January 2, and Wright said she resigned in December. She said Anglen made no attempt to contact her and said she never participated in criminal investigations since she was on the civil side of the EIU.

Wright attached a screenshot of a letter from AGO HR stating, “Human Resources has received your resignation, we understand your last day at the Attorney General’s Office was 12/30/2022.” She attached a photo of her resignation letter, dated and sent on December 31, 2022. Another screenshot showed a letter from AGO HR regarding insurance coverage which stated that her employment terminated on December 30, 2022. 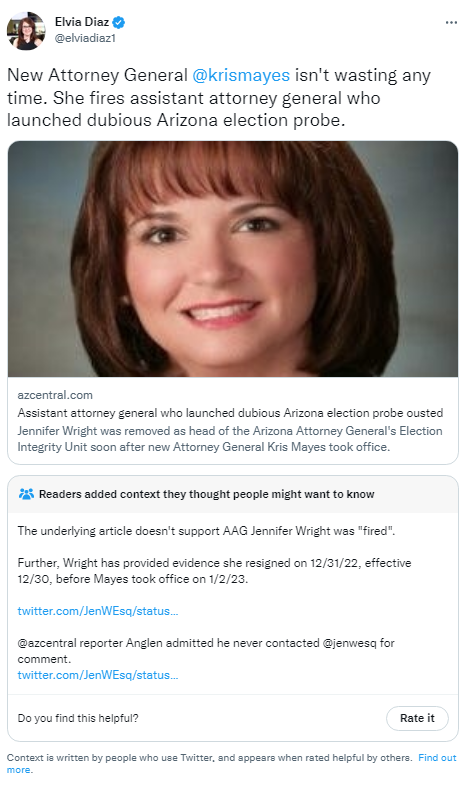 Wright observed that Yvonne Wingett, a former reporter for The Republic who now writes for The Washington Post, correctly wrote the story. Wingett tweeted, “BEHIND THE SCENES: Jennifer Wright, who headed @GeneralBrnovich’s election integrity unit, is no longer employed by the attorney general’s office. She was gone when @krismayes team arrived, I’m told.”

Elvia Diaz, the Republic’s director of opinions, tweeted on January 5, “New Attorney General @krismayes isn’t wasting any time. She fires assistant attorney general who launched dubious Arizona election probe.” The tweet has received over 240,000 views and has been retweeted 695 times.

However, a notice was added to the tweet through a new Twitter feature implemented under owner Elon Musk which states, “The underlying article doesn’t support AAG Jennifer Wright was “fired”. It points out that “Wright has provided evidence she resigned on 12/31/22, effective 12/30, before Mayes took office on 1/2/23” and “@azcentral reporter Anglen admitted he never contacted @jenwesq for comment.”

Wright responded to the tweet, including Mayes, “I’m calculating damages. It’s not looking good for the nearly bankrupt @azcentral.”

Wright posted a letter she sent to The Republic with redline changes she wanted made to Anglen’s article. She stated in the tweet about the letter, “Earlier this morning, I forwarded these corrections to @azcentral — although they have stealth edited the article at least three times (failing to indicate anywhere they made corrections), they have not made any of my latest corrections.”

The article said she “publicly supported right-wing candidates,” but Wright said in her corrections that she only supported one local candidate, State Senator Nancy Barto (R-Scottsdale), whose election results were not questioned. The article insinuated that she “used her office to investigate election losses.” Anglen said she “could not be reached for comment,” which Wright disputes, saying he did not try to contact her. Anglen implied Wright supported Kari Lake and Abe Hamadeh, so she should have recused herself from the AGO’s investigation into the election, but Wright pointed out she never tweeted anything in support of either.

Wright’s letter also disputed the characterization of a criticism Maricopa County Deputy Attorney Tom Liddy made about her. Anglen said Liddy wrote that “Wright misinterpreted state law and demanded information on procedures that aren’t required under law and don’t exist, such as a ‘voter checkout’ policy.” Wright said this was incorrect since Liddy himself “provided the purported ‘checkout procedures.’ The procedures were widely touted by Gates and Richer on social media and television the day of the election in response to the proven and admitted printer problems.”

Another tweet by Wright called out Anglen, “After the article was published stating he reached out when he didn’t, he *finally* reached out and admitted he hadn’t tried, as his article suggested. 🤦🏻‍♀️”

Funny, @robertanglen admitted to me via email he never reached out for comment. He claimed he "just" discovered he was blocked (which he reported on in Nov '22). Then he said he didn't think to try Linked In.

Wright posted a copy of an email Anglen sent her responding to her requests for a retraction.

He stated, “A Mayes official twice confirmed to me that you had been ousted and you had been told to resign or be fired. The story fairly reflects that your services were not wanted by the new leadership in the AG’s office.”

He concluded, “But the AG’s office stands by its statement that you were asked to leave, and the story will continue to reflect that.”

Wright sent a letter to Greg Burton, the executive editor of The Republic, expressing her concerns. “As an attorney, my reputation is a significant part of my ability to get clients,” she said. “The longer you keep up this defamatory article, the more damages I am incurring.”

Wright tweeted to Mayes, “I have it on VERY good authority WHO in your executive suite lied. Surprised anyone would risk their bar license to plant lies with @azcentral. Clearly you intend for @robertanglen to be the patsy to go down.” She warned in a follow-up tweet, “And even if

@krismayes source gets “protection” — that just means that @azcentral loses the case.”

According to Arizona’s Law, Mayes brought on Dan Barr as her chief deputy. Barr is a former colleague of DNC attorney Marc Elias, who champions challenging election integrity lawsuits around the country, including his firm’s representation of recently elected Governor Katie Hobbs defending against Kari Lake’s election contest.

The Twitter firestorm prompted numerous reactions from observers, including casualitaAZ who tweeted, “Wait…election fraudsters fired the lawyer in charge of investigating the fraudulent elections of 2020 and 2022????” Taylor tweeted, “Defamation much? She resigned.”

A.R.S. 12-653.2 requires written notice of statements alleged to be libelous and a request for a retraction to the offending party within 20 days if intending to sue. If the libel is not retracted, a plaintiff can sue for special damages.

While the AGO came under criticism occasionally for not more aggressively challenging the county’s defiance, Wright said some of it was because the AGO did not have statutory authority to do anything more.

She tweeted on Sunday, referring to former Senate Majority Leader Paul Boyer (R-Glendale), who declined to run for reelection in part due to his unpopularity for opposing election integrity bills, “At the time I left the AGs office, there were several open PRRs that were never fulfilled. Because I headed the civil unit, I had no statutory power to issue civil subpoenas. There was a bill in the last legislature to give me civil subpoena power that Boyer killed.”

The Arizona Legislature passed a bill creating the Election Integrity Unit in 2019. Wright had substantial experience, having worked for the Arizona Republican Party on election integrity and co-chaired the watchdog group Verify the Vote.

Anglen’s article still says Wright was “ousted” in the title, and, “In one of her first official acts, newly elected Attorney General Kris Mayes told Wright to resign or be fired, her office confirmed Wednesday.” A sentence was added stating that Wright denies being fired.

The Sun Times asked the Attorney General’s Office, Anglen, Burton, and Diaz for comment, but did not receive a response by press time.