Tennessee Governor Bill Lee painted the state as a leader in the nation and highlighted the work still ahead during his second inaugural speech held in Nashville on Saturday.

“We have set an example for America of how to serve,” Lee said during his remarks, adding, “the halfway point of any endeavor is a good time to reflect, but it’s an even better time to plan – to focus on the work still ahead.” 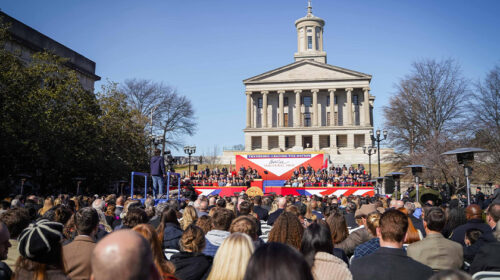 The governor highlighted five specific areas he intends to focus on during his second term as Governor – transportation, energy, natural resource conservation, environment preservation, and protecting children in the state’s foster care and through the adoption process.

Lee said, “We need a transportation strategy and an energy strategy designed for one of the fastest growing states in America. We need to enhance efforts to conserve our natural resources and preserve the environment of what I believe is the most beautiful place in the world. We need to protect children in our custody and in our state with a better foster care and adoption process.”

“We need to do these things and many more, but we can never abandon the standard of fiscal responsibility that makes our success possible,” Lee added.

“It is the highest honor that I have to serve the people of Tennessee as Governor, and I thank them for the opportunity that they have given me to do so. May the Lord pour his continued favor upon, and richly bless the people of the great State of Tennessee,” Lee concluded.

Lee has already discussed his plan to tackle one of the five topics he mentioned in his speech. Earlier this month, Lee unveiled his Transportation Modernization Act of 2023 in an effort to address transportation needs across the state, as previously reported by The Tennessee Star.

Kaitlin Housler is a reporter at The Tennessee Star and The Star News Network.