The Penn Biden Center for Diplomacy & Global Engagement, the University of Pennsylvania think tank of which President Joe Biden was once the de facto leader, has had no publicized activity for nearly a year and its future is uncertain.

Biden reportedly used the Washington, D.C.-based center as his main D.C. office for much of the time between the end of his vice presidency in 2017 and his presidential run in 2020. From 2017 to 2019, Biden received approximately $900,000 in salary for a Penn professorship that did not require him to teach regular classes.

The center has generated controversy as the site where nearly a dozen classified government records were discovered in November. (Federal authorities have continued to find classified documents at the president’s Delaware home.) Some observers have noted that donations and contract payments from entities in communist China to Penn ballooned to $61 million in the think tank’s initial three years of operation, raising questions about potential Chinese influence on the university and about who may have had access to the classified materials.

During much of its existence, the Penn Biden Center functioned as a professional mainstay for foreign-policy specialists who would go on to join the Biden administration. Now, the office’s website lists no staff.

As The Pennsylvania Daily Star reported last week, the think tank published little, if any, original research. But its media output has been particularly infrequent in the past year. Its last web announcement came out last April and it has issued no social media updates since May. 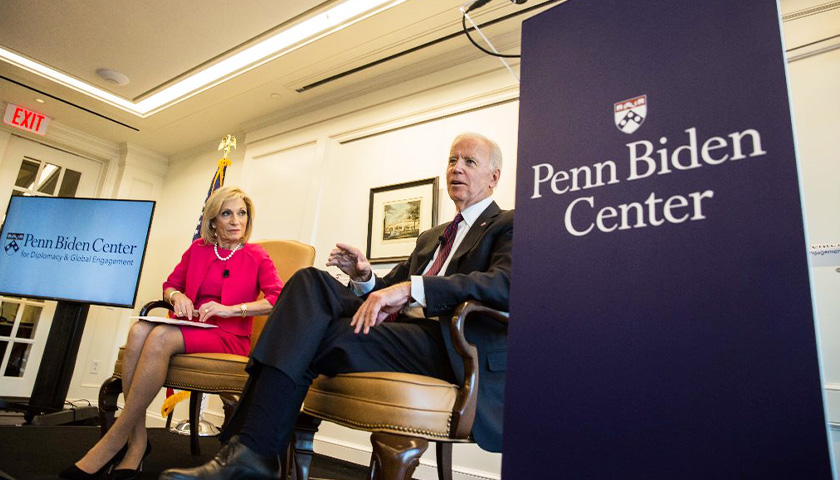 Neither the University of Pennsylvania communications office, the Penn Global initiative which operates the center nor the center itself responded to a Daily Star email asking whether the institution has any administrators, how much it costs to run or whether it will long continue to occupy its 13,800-square-foot space on Constitution Avenue.

A listing of the Penn Biden Center’s early leadership lineup in October 2018 featured Joe Biden himself as Benjamin Franklin Presidential Practice Professor. The webpage also included Antony Blinken as managing director and Michael Carpenter as senior director. Blinken and Carpenter are former Obama-era foreign policy officials who would respectively go on to work in Biden’s administration as secretary of state and as ambassador to the Organization for Security and Cooperation in Europe.

Several other members of the center’s initial senior fellows and consultants also would go on to serve in high-profile posts under the Biden presidency. Those include Spencer Boyer, who now serves as deputy assistant secretary of defense for Europe and NATO; Daniel P. Erikson, who is the deputy assistant secretary of defense for the western hemisphere; Juan S. Gonzalez, who would become senior advisor and special assistant to the president; Colin Kahl, who serves as the undersecretary of defense for policy; Jeffrey Prescott, who is the deputy to the United States Ambassador to the United Nations; and the center’s managing director Steve Richetti, who works as counselor to President Biden.

The revolving door of Penn Biden Center scholars gaining federal jobs under Biden would continue as Austin Doehler joined the center as of 2020 and went on to work as a program analyst for the the United States Agency for International Development. A 2021 listing showed Puneet Talwar worked as a visiting scholar at the center; he now serves as the United States Ambassador to Morocco.

Since that time, the think tank appears to have become, if anything, a bare-bones office. The same webpage that boasted a bevy of scholars in years past showed only a senior staff of three in 2022. It now mentions no scholars or employees.