RICHMOND, Virginia – Governor Glenn Youngkin spoke at a rally on Monday where he shot hoops with children and called for his supporters to pressure their legislators to support the tax relief package included in his budget amendment proposal.

The governor touted Virginia’s $3.6 billion surplus, and said that lowering taxes is the key to reversing out-migration in the Commonwealth.

Youngkin’s proposal builds on cuts already passed in the budget in 2022 and includes $1 billion in tax relief, lowering the business tax rate from six to five percent and lowering the income tax for payers above $17,000 from 5.75 percent to 5.5 percent, and increasing the standard deduction on income tax. Youngkin also called for making Virginia veterans eligible for a $40,000 tax exemption at any age.

During his campaign for governor, Youngkin campaigned on doubling the standard deduction from $4,500 to $9,000 for single filers, and from $9,000 to $18,000 for joint filers. The Fiscal Year 2023-2024 budget compromise passed by legislators only increased the standard deduction to $8,000 for individuals and $16,500 for joint filers. McNamara and Norment highlighted efforts to finish doubling the deduction.

“You hear so much conversation that, ‘Oh, you’re just trying to change tax laws for the wealthy people,'” Norment said. “Let me tell you: with this doubling the standard deduction, we get that through, that is going to have a dramatic impact on lower-income and middle-income individuals.” 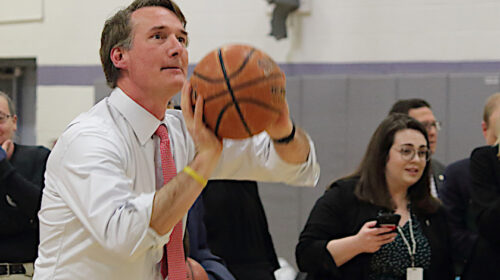 Youngkin needs to get buy-in from Senate Democrats on his proposals. After Youngkin presented his budget amendments to legislators in December, Senate Finance Co-Chair George Barker (D-Fairfax) indicated that huge tax cuts are unlikely.

Democrats also have their own wish list for spending and tax relief. The budget compromise passed last year made 75 percent of Virginia’s Earned Income Tax Credit (EITC) refundable, a concession from Republican negotiators after Democrats sought to make 100 percent of the EITC refundable. After Youngkin’s State of the Commonwealth address, Senator Jennifer McClellan (D-Richmond) included that in a list of more targeted tax relief proposals she’d like to see.

“It’s not part of my initial package,” Youngkin told reporters after his Monday rally. “It is something that I think they’re going to talk about, and we’ll see where that goes. What’s more important I believe, is that we finish the standard deduction work, that we take care of our veterans, and we get our rates down.”

“But I’m always, always open to talking to folks about different approaches, but at the end of the day, our package has been really clear: we have got to get on the path of getting Virginia’s rates down because the states below us have already started this and we are way behind,” he said.