The election committee of the Arizona Senate held a hearing on Monday featuring the results of an investigation into Maricopa County’s 2022 midterm election conducted by the election integrity group We the People AZ (WPAZ). Commissioned by outgoing Senate President Karen Fann (R-Prescott), the group submitted public records requests to Maricopa County Elections Department to obtain the data. The leader of WPAZ, Shelby Busch, testified to the committee chaired by State Senator Wendy Rogers (R-Flagstaff) that 464,926 ballots fed into tabulators on Election Day in Maricopa County, 217,305 were rejected, which is nearly a 50 percent failure rate.

Busch told the legislators it was a “complete systemic failure” of signature verification and urged “legislative intervention.” She warned that the system is “vulnerable to fraud.”

Dr. Walter Daugherity, a math professor at Texas A&M University, testified that he was 99.999 percent confident that there were 290,644 bad signatures accepted in the election. 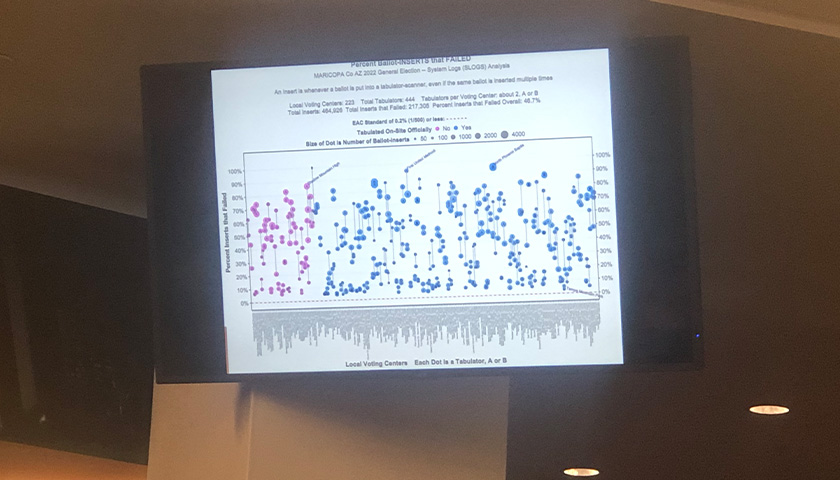 Busch said every single one of the 446 tabulators in Maricopa County failed the allowable error standard allowed by the Electoral Assistance Commission (EAC). The EAC allows for only a misfeed rate of .002 percent, or one out of every 500. Some had a failure rate as high as 95 percent.

Busch said they found 1,870 ballots that were illegally cured. She provided examples showing ballots with no signature, no phone number, and other discrepancies.

Many ballots had names signed that were different than the voters’ names, yet workers placed labels over them, “altering the ballot affidavit to match the voter registration,” Busch said.

“I saw this in magnitude,” she emphasized, stating they found at least 542. She said no attempt was even made to cure these ballots.

Busch found duplicate voters — where more than one vote was cast and counted for a single voter. She found 36,034 votes cast with unreasonably mismatched signatures or the wrong voter. There were illegible or unusable reference signatures in the voter registration file, such as microscopic signatures or none.

She found over a thousand voter registration files that were changed to update the signature to match the original signature on file. Several hundred of these changes occurred the day after Election Day. These appeared to be the work of progressive nonprofit organizations. She thought it was strange that there were no other changes made to the voter registration files except updating their signatures.

Another problem the group found was issues with ballots that required assistance from the Special Elections Board, a group of workers assigned to help voters fill out their ballots. The group found 2,104 problems, such as not being signed and dated by the witness or no phone number. 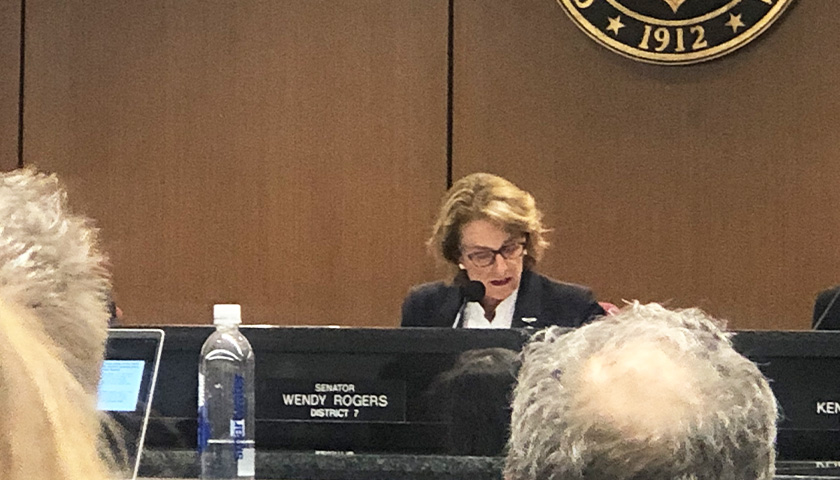 She also addressed the scant amount of time workers had to verify signatures. She said they averaged only eight seconds per signature, whereas it takes 30 to 45 seconds to adequately check a signature. This was addressed in both State Senator Sonny Borrelli’s (R-Lake Havasu) election contest lawsuit and Ryan Heath’s lawsuit suing the judge who dismissed Kari Lake’s lawsuit.

Busch reviewed the declarations from signature verification workers who testified that 20 to 30 percent of signatures needed curing but were never cured; they said they believed a supervisor just accepted them. Lake included these in her election contest lawsuit.

The group also analyzed data from the 2020 presidential election and found that 420,987 signatures on ballot envelopes failed signature verification procedures. Busch stated that the problem was never fixed before the 2022 election.

Judges around the country have often ordered new elections where there were far smaller discrepancies in elections. In 2019, a judge ordered a new election for a Georgia House seat based on merely finding that four voters were ineligible. In addition to Lake’s lawsuit, which is scheduled for oral arguments at the Arizona Court of Appeals on February 1, Abe Hamadeh is challenging the results of the Arizona Attorney General’s race, and Mark Finchem is challenging the results of the Arizona Secretary of State’s race.