Hymn-writers Keith and Kristyn Getty led a spirit-filled event related to a conference they are leading this week at Brentwood Baptist to promote congregational singing. The husband and wife duo from Northern Ireland divide their time between Northern Ireland and a home in Nashville.

Monday’s event at the Grand Ole Opry featured several surprise guests, including Tennessee Gov. Bill Haslam, who offered welcoming remarks and read from the Old Testament book of Zephaniah, where the Bible talks about how God “will take great delight” in his followers and “rejoice over you with singing.”

In addition, Gary Haugen, the CEO and founder of the International Justice Mission, was introduced on stage so he could briefly talk about his group’s mission. A faith-based ministry supported and promoted by the Gettys, the IJM works to stop human trafficking. 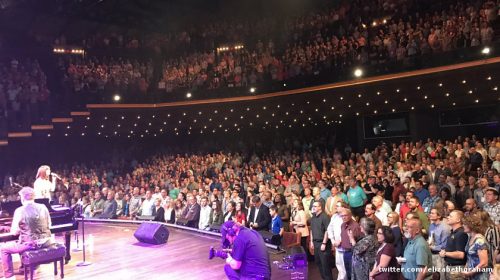 Alistair Begg, a native of Scotland who pastors a nondenominational church in Ohio and hosts a Christian radio show, also spoke briefly.

The Gettys led the crowd in singing classic hymns such as “Be Still, My Soul” and “Nothing But the Blood,” as well as hymns they are known for, including “The Power of the Cross” and “In Christ Alone.”

The event featured numerous instrumental artists and a choir.

“It’s a night I’ll never forget,” said Brian Finley, a worship team leader at a Southern Baptist church in South Carolina who is attending the conference at Brentwood Baptist this week. It was his first time at the Grand Ole Opry. “It was unbelievable,” Finley said. “The most important thing is the Lord was glorified.”

The conference continues through Wednesday morning. For more information and to watch a free simulcast, visit gettymusicworshipconference.com/#sing-home.