Senator Bob Corker’s (R-TN) favorability rating has sunk to a record-low 22 percent among Tennessee Republicans, according to a new poll released by The Tennessee Star on Wednesday.

A full 60 percent of Tennessee Republicans have an unfavorable view of the retiring junior senator.

The poll of 1,028 Tennessee Republican likely primary voters was conducted for The Tennessee Star by Triton Research between December 12 and December 18 using IVR technology (automated phone response), and has a 3.1 percent margin of error.

“These numbers are not really surprising, based on his consistent attacks on President Trump and obstructionist approach to issues that Tennessee voters overwhelmingly support,” Andy Ogles former State Director of Americans for Prosperity, tells The Tennessee Star, adding:

Senator Corker figured out that we had figured him out and when he saw similar poll numbers earlier this year so he chose not to try to face Tennessee voters with his pro-Obama, pro-Establishment track record. Once he had a serious opponent for his seat he realized he was going to have to face the political reality of the end of his career sooner rather than later.

Ogles was the first and only Republican to announce his candidacy for the U.S. Senate seat prior to Corker’s surprising announcement on September 25 that he would not seek re-election. Ogles withdrew from the race on November 15, a little more than a month after Rep. Marsha Blackburn (R-TN-07) announced that she was entering the race subsequent to Corker’s announcement he would not run again.

“Other red-state Senators seem to have learned from Corker’s hubris and have moderated their own public comments about Trump in order to escape the political endgame that Corker’s mouth created for him. Corker’s collapse in the polls is not only completely self-inflicted, they was entirely foreseeable based on Trump’s 29 point, and 92 out of 95 county, trouncing of Hillary Clinton in Tennessee,” Gill adds.

Another well respected Tennessee conservative thinks Corker is the cause of his own ratings favorability downfall.

“Now everyone knows why Bailout Bob is not running for reelection. Corker is the anti-Trump. Where Trump promised a conservative agenda and is delivering, Corker ran as a conservative and quickly became the Senator from Obama,” Judson Phillips, a Tennessee attorney and founder of Tea Party Nation, tells The Tennessee Star.

Corker’s standing among Tennessee Republicans has plummeted even further below the low ebb it reached six months ago, as The Tennessee Star’s June 2017 poll of likely Republican voters revealed at the time:

An equal number, 41.6 percent, said “give someone else a chance.”

There were not a great number who were undecided on this question–only 17.3 percent said “don’t know/not sure.”

“An incumbent who falls below a 50 percent re-elect number should be wary, particularly when they have seen so much anti-incumbent turmoil in the electorate in recent years,” media consultant and political strategist Steve Gill tells The Tennessee Star.

“But when that number slips to 41 percent, as we see with Senator Corker’s numbers, it should sound alarm bells,” Gill adds.

The junior Senator from Tennessee may only have himself to blame for some of his apparent vulnerability.

Last month he made headlines when he criticized President Trump, who remains very popular among Tennessee’s Republican primary voters.

When asked “Senator Bob Corker recently said President Trump is ‘out of control’ and the ‘White House is in a downward spiral.’ Do you agree or disagree with Senator Corker?” only 20 percent of likely Tennessee GOP primary voters agreed. A huge 76 percent disagreed.

His criticism of President Trump appears to have hurt Corker badly among Tennessee’s Republican primary voters.

On the Republican side, Blackburn is considered the heavy favorite, with former Rep. Stephen Fincher (R-TN-08) and Dr. Rolando Toyos also in the race.

UP NEXT: Tennessee Star Poll Reveals Movement in Tennessee Republican Primary for Governor (to be published tomorrow, Thursday)

You can read page 1 of the poll results here: 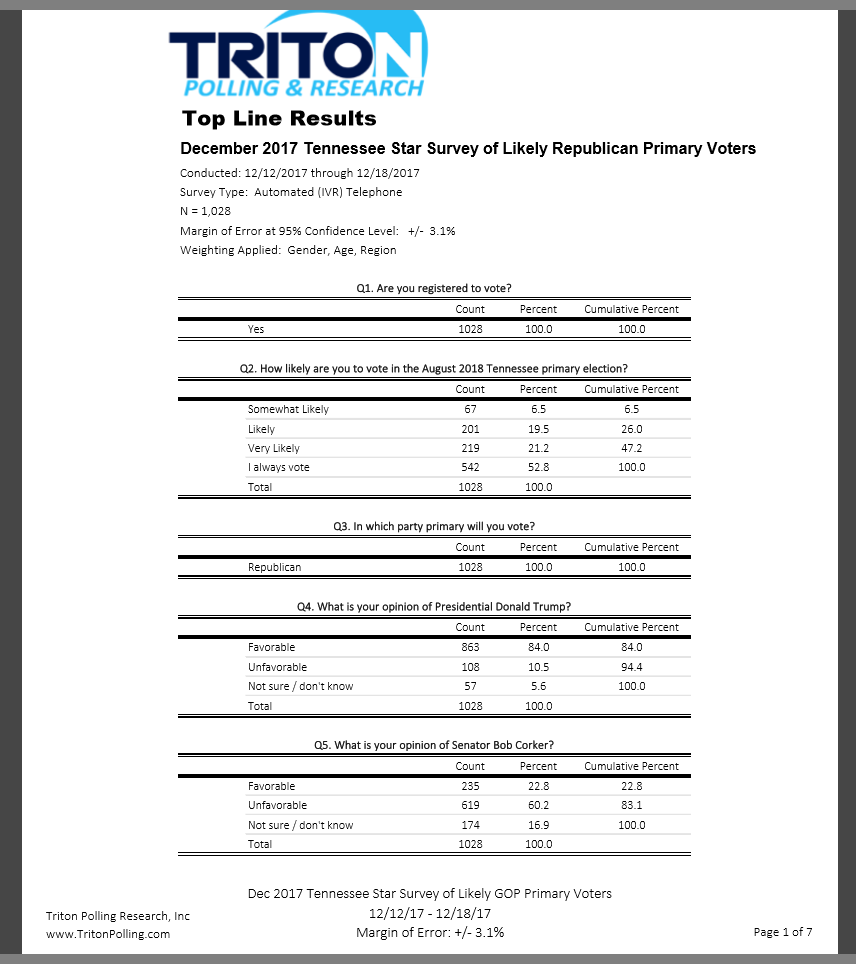