Last week, NewsChannel 5 reported, based on sources as well as security video footage shot by nearby local businesses, that Barry and Forrest’s SUV had repeatedly visited the Nashville City Cemetery on a number of mornings for short periods of time, ranging from 12 minutes to 24 minutes.

Wilson’s report, which aired on 99.7 FM WTN’s Nashville’s Morning News at 5:05 am and again at 7:05 am on Monday, relied upon sources he considers credible.

At 9 a.m Monday, Mayor Barry sent out this tweet:

Mr. Wilson, your story is false and slanderous and I would appreciate it if you would stop spreading these lies.

Wilson punched back, inviting the mayor on his show for a full hour on Tuesday to discuss these and other allegations.

The Tennessee Star contacted Mayor Barry’s office and asked for responses from the mayor to two questions:

2. Also, does Mayor Barry deny that she and Sgt. Forrest ever visited Mt. Olivet Cemetery in a white SUV or any other vehicle?

“That story is absolutely false,” Mayor Barry’s spokesperson Sean Braisted responded to The Star in a statement emailed late Monday, without specifically quoting the mayor.

Braisted did not, however, answer The Star’s second question asking for a specific denial from Mayor Barry that she and Sgt. Forrest ever visited Mt. Olivet Cemetery in a white SUV or any other vehicle.

The Star also contacted Mt. Olivet Cemetery, which is owned by Dignity Memorial based in Houston, Texas, and asked for a comment on Wilson’s report.

“Company policy is not to offer any comment on anything no matter who you are,” a Mt. Olivet Cemetery employee told The Star.

The Star asked for general manager Barry Miller, who was not available to provide a comment at the time, to call back with more details. Mr. Millwer has not yet responded.

Two questions The Star wants to ask Mr. Miller are:

1. Does he categorically deny Wilson’s report that Mt. Olivet Cemetery workers reported chasing out a White SUV that matches the description of the city vehicle Forrest and Barry used to visit the Nashville City Cemetery in mornings?

2. Does he have video footage of the comings and goings at the cemetery, and would he be willing to share that footage with Nashville media outlets? 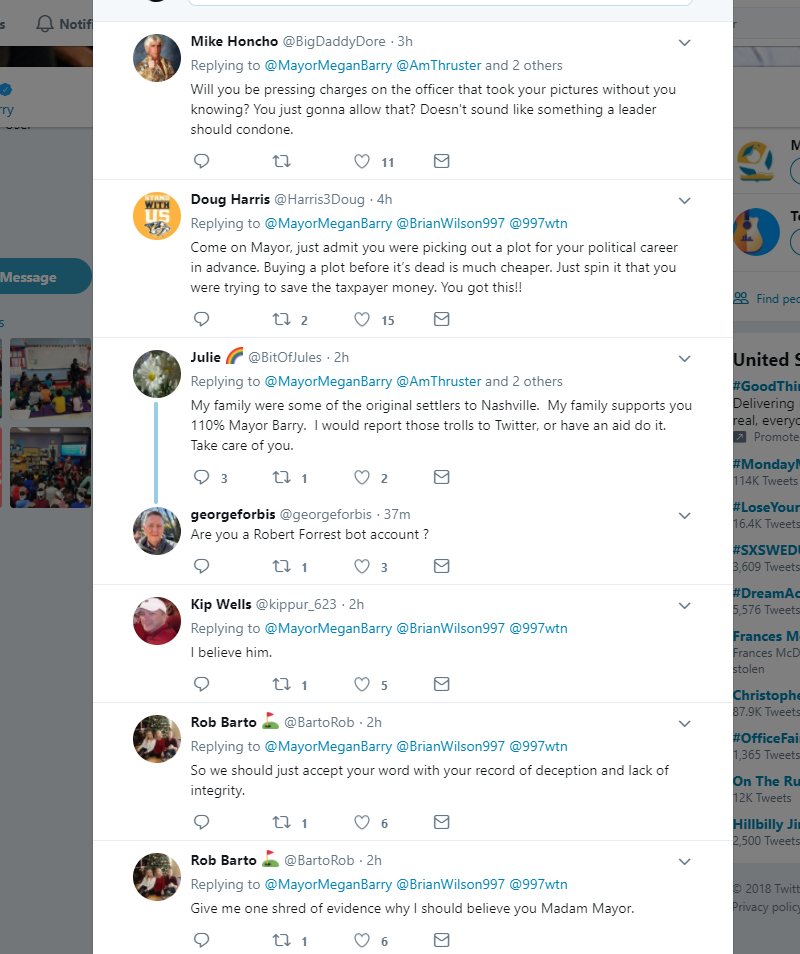