NASHVILLE, Tennessee–WTN introduced Brian Wilson, the new host of Nashville’s Morning News, heard mornings from 5 a.m. to 9 a.m. on 99.7 FM, at a round table style town hall event open to the public from the station’s studios on Music Row on Thursday. 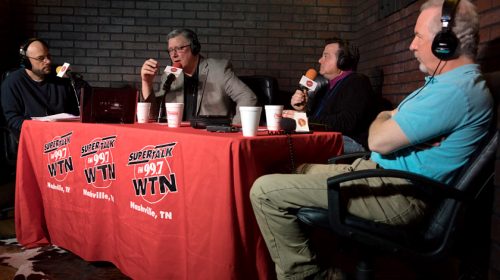 The one hour event was broadcast live from noon to 1 p.m. on the Dan Mandis Show in front of a studio audience of WTN listeners. All four of the station’s hosts–Wilson, Michael DelGiorno, Dan Mandis, and Phil Valentine–were present for the lively conversation that covered local, state, and national events, and provided WTN listeners with more details about Wilson’s career in broadcast journalism, which began in the oil fields of West Texas, went through Washington, D.C, and has arrived now in Nashville.

Audience members traveled from as far away as Manchester, Bell Buckle, and Liepers Fork.

Mandis asked Wilson about his career at Fox News.

“I worked for the local Fox News affiliate (in Washington D.C.) for 13 years, and then I went over to the Fox News Channel in year number two, and I worked there for 12 years, and eventually rose to be an anchor reporter,” Wilson said. 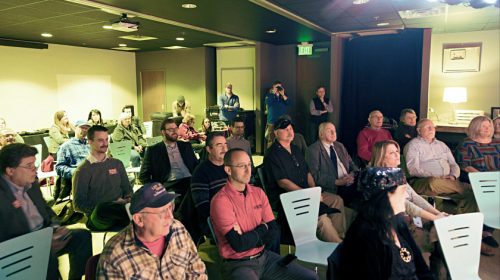 “I had a weekend show that I did, and I reported at the White House, I covered Capitol Hill for awhile, I was the Capitol correspondent, for a short while, and I learned my lesson there, I learned that I was not management material, I was actually a manager there, I was the bureau chief for a short while, and I got out of that real quick,” the 6 foot 4 inch tall Texan added.

‘It was all told 12 years and it was a great experience,” he emphasized.

“The thing about 24 hours news is, I remember watching an episode of Cheers,” Wilson began, then made this comparison between one of the characters on Cheers and the problems facing journalists today:

One day they were talking to Cliffie the postman. And they said why do people go crazy in post offices and start shooting up the place.

He says “It’s like the mail. It NEVER stops.”

That’s the way it is in 24 hour news. We have a deadline every minute.  And so, I really needed to take a break from that. I honestly got burned out.

“I walked away for awhile. I  did some talk radio in D.C. and then decided to take a break from that for a while and get out of D.C. which has become the most bitter and partisan and polar place, then all of a sudden an opportunity arose, and I got the call to come here,” Wilson added.

Michael DelGiorno, who host the WTN program that airs daily from 9 a.m. to noon, then asked Wilson about the heightened partisanship of Washington D.C. today.

“How does living in Washington D.C. translate?” Del Giorno asked

“When I first got to Washington in 1986 . . . the politicians would from time to time, they would get up and the floor of the Senate or the House and debate and beat each others brains out in a good debate. And then 5 o clock when they wrapped it up they went out across the street and had a beer,” Wilson explained.

“On occasion, because you were friends with that guy and you knew his family. . . you could occasionally get something done, you would find a point of compromise,”Wilson recalled.

All that has changed since, he noted.

“It just got so partisan. We’ve become so polarized in our position there’s no willingness to cross the line,” Wilson said.

He went on to explain how many elected politicians in Washington look at the world now.

“Right now, especially, there’s a sense that the most important thing is getting re-elected. and so when it comes to that, they go for the issue. ‘I would rather have an issue to get re-elected on than to solve the problem’, ” is how politicians in Washington behave today, Wilson said.

The former Fox News journalist says he loves living in Nashville, in part because he loves music. He’s played the guitar much of his life, and says he’s an “adequate” guitarist, though he hesitates to go much beyond that, because there are so many great guitarists in Nashville.

The charm of Nashville, he says, has a lot to do with its tradition of country music.

It something that Wilson says may be in danger, as the forces of “bureaucratic modernization” come into conflict with freedom and musicianship.

As a case in point, Wilson says that on Nashville’s Morning News on Friday, he will interview a musician who has been fined $400 by local authorities simply for playing her fiddle on the street without a permit.