NumbersUSA, an Arlington, Virginia based non-profit group that advocates for lower immigration numbers across the board, including restricting legal immigration, tracks and grades members of Congress and US Senators on their voting record on this issue of great concern to Americans.

Marsha Blackburn (R-TN-07), who has served in the House of Representatives since 2013 and is now a candidate for the US Senate, has received a lifetime grade of A+ and has been designated a “True Reformer” by the one-million member organization.

Since entering Congress 15 years ago, and even before immigration became a kitchen table issue for most Americans, her votes and public statements were in line with NumbersUSA positions.

She has consistently voted to reduce chain migration and refugee fraud. She has voted to end anchor baby citizenship, a major draw for illegal migration to the US, and has voted for border security at every opportunity in addition to receiving an A+ grade for “challenging the status quo,” a sign of courage in this time when political correctness seems to have a stranglehold on members of Congress.

Indeed, in keeping with her 15-year record in the House of Representatives, her campaign website showcases her stand on controlling immigration and securing our border. 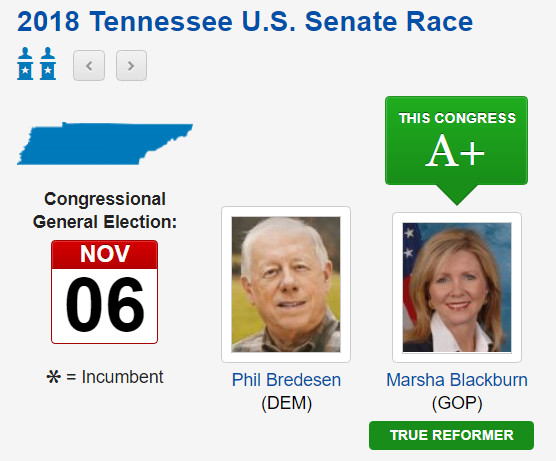 Following a recommendation by two far-left Washington, DC activist groups, which are advising Democrats to avoid talking publicly about the contentious issues surrounding immigration, the campaign website of Blackburn’s Democrat opponent, Phil Bredesen, is silent on the subject.

Earlier this week, a widely-read Capitol Hill news outlet, The Hill, reported that the Center for American Progress, originally launched by longtime Clinton operative John Podesta, and Third Way quietly put out a policy memo advising candidates in tight races, in states where Trump won in 2016, to avoid talking about immigration.

Left-leaning groups are advising Democratic candidates in the November midterm elections to steer clear from discussing immigration in states and districts that President Trump won in 2016.

A strategy memo co-authored by the Center for American Progress and Third Way — two Washington-based think tanks — recommended that certain Democrats speak about the topic as little as possible and instead focus on topics that will better resonate with their voters.

According to poll results published Thursday at The Ohio Star, the vast majority of voters in twenty-five battleground states want national legal immigration reduced from its present estimated one million (admitted through a whole host of government programs) to, in some states, as few as 250,000 total.

In Tennessee, where 76% of respondents polled said they want to see the present number reduced while 26% would prefer one million or more to be admitted to the US each year, the subject of immigration (illegal as well as legal) could be a deciding factor in a close US Senate race on November 6th .

Candidates who have never served in Congress may still receive a rating from NumbersUSA by contacting the organization and filling out and returning a survey form.

Obviously, Phil Bredesen has not taken advantage of an opportunity to go on the record on immigration. His silence on the matter is instructive.

Anna Marie Bolton is a reporter at The Tennessee Star.