NASHVILLE — Nashville Mayor David Briley announced at a press conference Tuesday that the city will not assist the U.S. Immigration and Customs Enforcement or U.S. Customs and Border Protection officers, as long as it can legally help it.

“Frankly, HB2315 is un-American. It’s reminiscent of the general warrants that resulted in the American Revolution. HB2315 delegates the power to arrest to unnamed bureaucrats in Washington, D.C., and it is a law that should be rescinded, repealed, and challenged in our state,” Briley said. 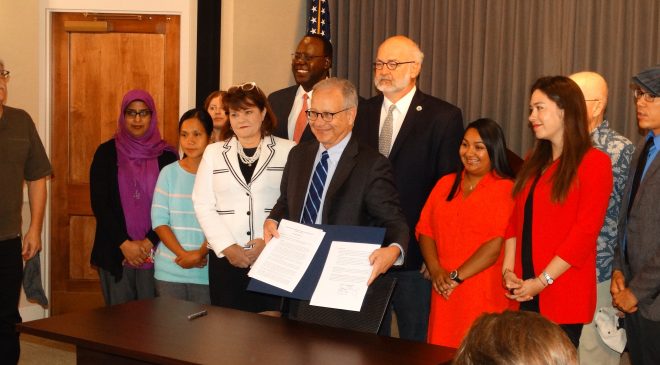 “Additionally, today I am also calling on the Metro Legal Director to explore any and all legal challenges to HB2315 that would result in it being declared unconstitutional.”

Briley said that once the law is overturned “we will take immediate action.”

• No Metro agency or Metro employee will permit ICE or CBP agents to use Metro facilities, information or equipment, including any agency, electronic databases, for investigative interviews or any other investigative purpose or to execute an immigration enforcement operation.

• No Metro agency or Metro employee or agent may spend time responding to ICE or CBP inquiries or communicating with ICE or CBP regarding a person’s custody, status, release date, or home or work address. The city will only cooperate in the context of a valid public records request or otherwise something required by state or federal law.

• Metro employees, agents or agencies may also not request information from a person about their citizenship or immigration status unless such inquiry or investigation is required by ordinance or ordered for state or federal law.

“Meanwhile, while we wait for this law to be declared unconstitutional, all Metro employees should know they will not be disciplined by the city or their supervisors for failure to comply with a request from ICE unless required by state or federal law,” Briley said before he announced the following executive actions:

• Every Metro department head and agency director must designate a person within his or her department or agency to get notified if an employee or an agent receives a request to support or assist an immigration enforcement act. The designee will communicate that request to the department head or director and document that request in a memorandum and send it to the Mayor’s Office of New Americans within three business days.