When I joined Rotary in 2014, one of the most important guides I was given by the members is that Rotary is not political. Although I’ve been involved in local politics for many years, I really have enjoyed putting politics aside and working with other Rotarians of all stripes to help those less fortunate locally and internationally.

Unfortunately, in a recent edition of The Rotarian, it appears Rotary is taking a hard turn directly into a very contentious political issue: climate change. “Our Climate Change Series” starts off with then-Rotary International President Barry Rassin announcing that climate change is now Rotary’s “ultimate mission.”

This places Rotary and its “ultimate mission” directly on the side of politicians like former Vice President Al Gore, U.S. Representative Alexandra Ocasio Cortez (D-N.Y.) and other “Green New Deal” politicians. One of the articles, “Friendly Persuasion,” describes Rotarian Marshall Saunders’ evolution into a climate-change activist starting with watching “An Inconvenient Truth” and taking courses from Gore.

While Saunders uses “persuasion” terminology, there is no question climate-change lobbyists and climate-change politicians would use the force of law to impose drastic changes of their own on citizens.

Climate change alarmists demand that we radically overhaul our economy and way of life and insist that if we don’t the world as we know it will cease to exist. Diving right into this rhetoric is Sahar Mansoor, founder and CEO of Bare Necessities, a “zero waste personal care and home care brand.” She was interviewed in an article headlined, “Rotary Scholars and Peace Fellows Put Expertise Into Helping Environment.”

Asked if humans can stop climate change, Mansoor replied: “Based on the best scientific evidence available to date, we have less than 12 years to mobilize a complete conversion from fossil fuels to green energy, or we risk dangerously destabilizing Earth’s climate.” 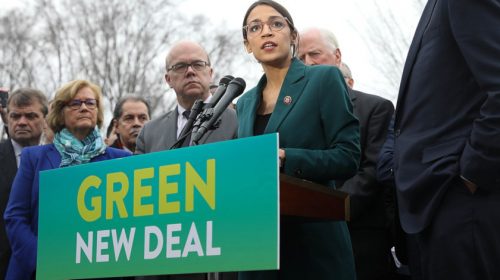 Sound familiar? Alexandria Ocasio-Cortez also believes that we only have 12 years to stop climate change or humans risk extinction.

Aside from being alarmist and intended to scare people into radical changes in law, economics, and day-to-day habits, these climate alarmists present no proof that their dire predictions will come to pass. Neither do they offer any evidence that their “solutions” will turn things around. As the Texas Public Policy Foundation has pointed out, previous predictions of world doom from people like Al Gore and the United Nations have had deadlines come and go and we are all still here. In addition, even if all emissions from the United States were completely eliminated, that would result in only .077 C lower temperatures by 2050, according to their own metric.

And the cost of this “Green New Deal”? Approximately one half more than our current total United States government yearly budget of $4.5 trillion. The Heritage Foundation examined the Green New Deal and predicted a 1.4 million job loss and a $3.9 trillion hit to the economy. This in addition to the radical change to our country by the closure of all fossil fuel production facilities (and businesses) just after the United States finally became more or less energy independent.

Who would be the winners from this kind of change to our national energy production (aside from the government bureaucrats who would profit from the growth of federal programs)? China and Russia who are both major producers and users of oil, gas, and other fossil fuels and, in China’s case, a major emitter of CO2. Neither China nor Russia are our allies politically, militarily or culturally. They would love to see us go backward in all of these ways.

The ability of the United States to have the premier military in the world (and keep the world’s wolves from our door) lies in our robust and fossil-fuel-powered economy. The Green New Deal would drastically reduce that economy. While it is very nice language to speak about “peace” initiatives and “leading by example,” unilateral economic disarmament which will lead to military weakness is foolish, especially in light of the recent military actions of Russia (Crimea and Syria) and China (the South China Sea). Just ask former British Prime Minister Neville Chamberlain (“Peace in our time”) how unilateral appeasement worked out.

From Broad Consensus to Sharp Division

Everyone can rally around Rotary initiatives like eliminating polio, providing clean water for those without it, education and equal rights for women, and saving women and children from sex slavery, but climate change is a highly charged political issue for which there is not universal agreement that the “science is settled” and certainly there is no consensus that the world is going to end in 12 years.

Is Rotary now going to endorse and advocate for government programs like the “Green New Deal” and the Paris Climate Accord to eliminate “climate change” even if that means massive changes to the United States system of government, including altering or discarding the U.S. Constitution?

Does Rotary endorse these changes in the United States even if countries that are emitting far more CO2, like India and China, do nothing to reduce their emissions? Even if embracing these policies places the United States and Western Europe at an economic and military disadvantage?

How much of Rotary International’s yearly budget (that is, how much of our dues and each dollar we contribute to the foundation) will be dedicated to the reduction of “climate change” including education, advocacy, and lobbying?

Rotary is running the risk of losing members who find this left turn not to their liking.

I would have thought Rotary had learned its lesson when it tried to ban all things related to guns (including sponsorship of fundraising events by gun stores and ranges) but had to back down after a huge outcry from the membership. Apparently, Rotary leadership didn’t learn the lesson.

And the attitude of some of its leadership leaves grave doubt that the organization will ever learn from these past mistakes. In the October 2019 edition of The Rotarian, the letters to the editor section chose to publish only those letters in support of its new climate alarmism policy. But what is more disturbing is the contents of those letters. All of them expressed their disbelief that other Rotarians felt the climate change issue was political and divisive.

One wrote: “I always thought Rotarians were, as a group, thoughtful and forward-thinking in caring for all things this planet has to offer. Based on the letters [in a prior edition], I can see I am wrong.”

Thus, the organization appears to endorse the view that those who disagree are backward thinking, thoughtless, and uncaring. Those are insults. Hardly a recipe for coming together to achieve peaceful relationships.