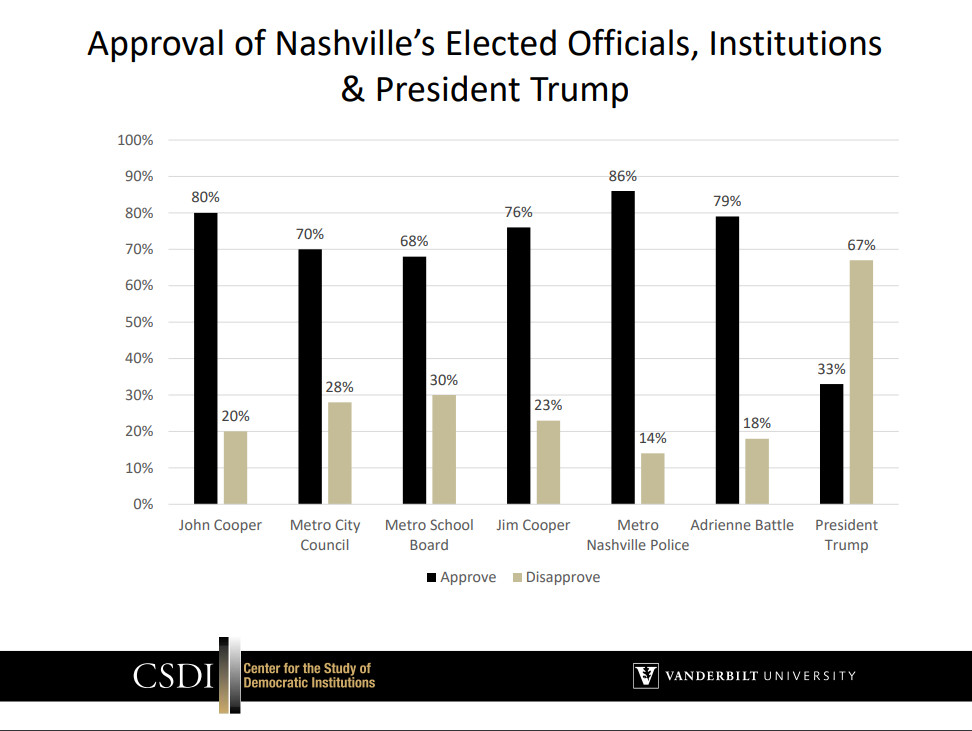 Overall, 63 percent of respondents said they believe Nashville is “generally on the right track,” but 57 percent said they are “very” or “moderately” worried about the impact of the coronavirus shutdowns on their personal finances.

Just 62 percent rated the city’s economy as “very” or “fairly” good, down 20 points from an 82 percent rating in last year’s poll.

“Local residents are understandably anxious about the pandemic, but they are very pleased by the response of local officials so far,” John Geer, dean of the College of Arts and Science, said in a press release. “Mayor Cooper rightly gets a lot of credit for how he’s handled the COVID-19 crisis. This support will be invaluable as he wrestles with some difficult decisions ahead concerning budgets and getting the city back on track.”

Increasing property taxes (28 percent) and temporarily reducing funding for affordable housing (36 percent) were rated as the top solutions for addressing the current budget crisis. However, the poll asked respondents about a five percent property tax increase, whereas Mayor Cooper has proposed a 32 percent increase.

On a national level, just 33 percent of Nashville residents surveyed in the poll said they approve of President Donald Trump’s job performance.

The poll is conducted annually by the Center for the Study of Democratic Institutions at Vanderbilt University. The poll surveyed 1,036 registered Davidson County voters over the age of 18 between April 9 and May 10.