The North Carolina State Wolfpack defeated No.21 Liberty Flames 15-14 Saturday night in a thrilling game that came down to the wire, snapping the Flames 10-game winning streak.

In a competitive, low-scoring contest, the Wolfpack sealed its victory by blocking a 39-yard field goal attempt by Flames kicker Alex Barbir with 1:18 left in the fourth quarter after Liberty had driven the ball down the field.

“Obviously disappointed. I feel like our kids played their guts out, as hard as they could for us, and we, myself, didn’t have a good enough plan for them to score enough points. Just not a good feeling,” Liberty head coach Hugh Freeze said during the postgame press conference. “I’m proud of [the team] though, proud of the way they fought. I thought our defense played their hearts out and gave us plenty of chances to win the football game.”

“You go toe-to-toe with a team in the ACC that I think is one of the top three or four talented teams in that group and had a chance to win it, so I’m proud of them for that, but it does sting,” Freeze added. 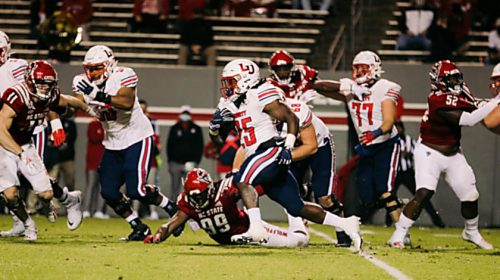 For almost the entire first half, NC State was in control on both sides of the ball, but especially in the run game. In the first 30 minutes of action the Wolfpack racked up 210 total yards, 156 rushing and 54 passing, while Liberty had just 129 total yards, 91 on the ground and only 38 through the air.

The Flames offense could not get anything going at first and did not score a point until the end of the second quarter, capitalizing on a bad interception by NC State quarterback Bailey Hockman after the Wolfpack were on the verge of taking a two-score lead.

In the third quarter, the game seemed to be shifting in Liberty’s favor. On the 2nd drive of the half, Liberty started with good field position and made its way deep into NC State territory.

Things went downhill from there for Liberty’s offense, however. NC State got a pivotal safety – shrinking the lead to five- and then the Flames’ offense stalled on its next couple possessions.

Midway through the fourth quarter Willis threw an interception, one of three on the night, which allowed NC State to start its dive with great field position and lead to a 4-yard touchdown run by running back Zonovan “Bam” Knight, giving the Wolfpack a one-point lead.

Despite two passing touchdowns and making some plays with his legs, Willis did not perform to his usually great standards. The Auburn transfer finished with the game with 172 passing yards, completing just 13 of 32 attempts, and 44 rushing yards.

Even though NC State won, it was an extremely sloppy, mistake-riddled game for the Wolfpack. NC State had got called for 14 turnovers that resulted in 123 yards from penalties, the most of the season.

The Wolfpack also struggled to run the ball in the second half, gaining just 11 total rushing yards in the third and fourth quarters because of halftime adjustments made by Liberty. Additionally, Hockman was not able to attack the defense through the air all night long, except for one 55-yard pass.

Saturday’s loss ended Liberty’s chance at a perfect season and their unbeaten record against Atlantic Coast Conference opponents this season, bringing the team’s record to 8-1 with two games remaining on the schedule.

The Flames will host UMass next Saturday before squaring off against No.15 Coastal Carolina in the regular season finale.