The Virginia state Senate on Wednesday voted to update the body’s standing committees for 2021 and simultaneously stripped GOP gubernatorial candidate Sen. Amanda Chase (R-Chesterfield) of her lone committee assignment from the previous year, resulting in a lengthy debate that highlighted the disconnect between the lawmaker and her colleagues.

The standing committee’s membership was updated at the request of Republicans in order to fill the vacancies left by the late Sen. Ben Chafin, who passed away from COVID-19 complications on New Year’s Day, according to Senate Majority Leader Richard Saslaw (D-Fairfax). 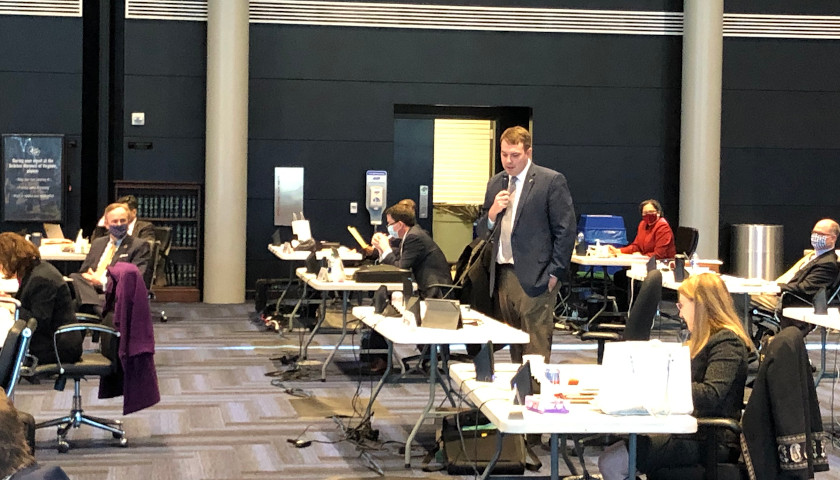 After the committee nominations report was passed out to senators and a motion to adopt it was under consideration, Chase spoke out against the move.

Chase claimed she was being penalized for leaving the Republican Senate Caucus in 2019 and that Senate rules were changed at that time to require legislators to participate in a party caucus in order to receive committee assignments.

“This is extortion Mr. President and I chose not to participate [in the caucus], and now I’m being penalized as an equal member of this body, one of 40 state senators, and in this update to the 2021 Senate standing committees, I no longer have any committee assignments,” Chase said.

According to Sens. Scott Surovell (D-Fairfax) and Steve Newman (R-Bedford), the Senate rule Chase mentioned actually states that if a senator during their term ceases to be a member of their original political party or caucus, either by self-declaration or through other conduct, that senator will have forfeited all committee assignments.

The two legislators also said that the rule does allow for standing committees to include a senator not elected to the two main political parties.

Furthermore, Newman argued that the situation was perfectly clear and Chase had “certainly” declared her exit from the Republican caucus.

Chase wound up talking on the floor two more times throughout the entire debate, again claiming that Senate rules were changed right when she left the Republican caucus to specifically punish her for that decision, which she billed as nothing personal.

As a conclusion to her final remark, Chase said she believed this action by the Senate was political targeting against her as the “frontrunner in the Republican nomination for governor and that there are those in this room that maybe don’t like the people’s choice for governor.”

Subsequently, Sens. Mark Obenshain (R-Rockingham) and Mark Peake (R-Lynchburg) both issued strong rebukes of Chase on the floor. Obenshain even claimed that Chase was told in 2019 what the consequences would be if she decided to leave the party caucus.

The Senate eventually voted on the motion and adopted the committee nominations report almost unanimously (Y-37 N-1), with Chase being the only member to oppose.

When asked why Chase was stripped from her assignment on the Local Government Committee, which she had for all of 2020, Saslaw told reporters that they’re “getting tired of her shenanigans” and that it was the Democratic caucus’ decision.

This move comes as Chase is experiencing severe backlash from her actions and comments surrounding the January 6 Capitol riots in Washington D.C. with Senate Democrats filing a censure resolution and Facebook banning her public page for 30 days.