Randy Boyd’s company, Boyd Sports LLC owner of the Tennessee Smokies, will profit on events booked at the proposed taxpayer-funded baseball stadium to be located in Knoxville.

The arrangement was revealed during a livestreamed Stadium Proposal Public Meeting held on March 25.

Introductory comments by both mayors were followed by an eight-slide presentation narrated primarily by Welch and Caldwell with Mamantov addressing the public financing aspect.  A question and answer period with previously submitted questions grouped and presented to the participants by Justice then took up about two-thirds of the meeting.

As presented, the stadium would be publicly owned by a sports authority, a joint corporation of Knox County and the City of Knoxville.  The formation of the sports authority was approved by the respective legislative bodies in December 2020 as a first step to moving Boyd’s Tennessee Smokies back to Knoxville from neighboring Sevier County.

For the $65 million stadium project, Boyd will be donating the land, the major portion of which he purchased in 2016 for about $7 million.

Boyd will be raising funds from private investors for the $100 to $140 million of multi-use development that will surround the stadium.

Boyd Sports will be marketing the stadium for additional events such as concerts and festivals, with a certain number of dates to be reserved for city and county community events. 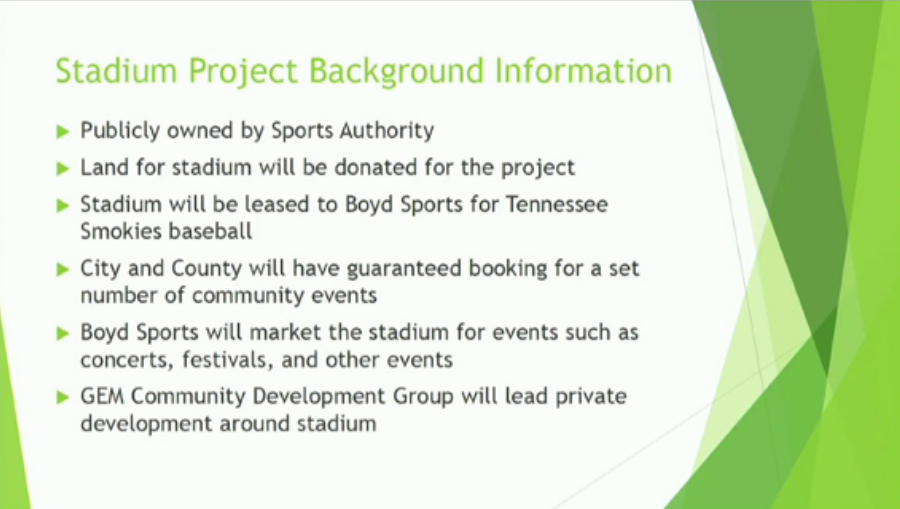 Mamantov addressed the taxpayer-funding of the stadium, saying that “virtually all” stadiums are financed publicly.  A sports authority is the most common mechanism, incentivized through Tennessee state law that allows state and local sales tax revenues to be diverted to cover the cost of the financing.

As such, existing law would create the first revenue stream to pay back the taxpayer funding of the stadium.

The second revenue stream would come from proposed legislation under HB 1204 and SB 0783, sponsored by Knoxville Republican legislators Rep. Jason Zachary and Sen. Becky Duncan Massey, respectively, that would use the sales tax revenues from the surrounding quarter-mile radius of the stadium, Mamantov – a financial contributor to the political campaigns of several of the bill’s sponsors – explained.

A third revenue source would be the lease to Boyd Sports for the Smokies games.

The incremental tax increase for the properties within the area, which reportedly provide very little in the way of current property tax, was listed as the fourth revenue stream.

The four revenue streams are estimated to provide a minimum total of 70 percent of the annual debt service for the stadium.

Any uncovered balance of the annual debt service from the four revenue streams would be shared equally between Knox County and Knoxville as a fifth revenue source.

Caldwell, in follow-up questions from The Tennessee Star, advised that the debt service is estimated at $4 million per year.  With the 30-year bond term, the total cost of the stadium of $120 million will be nearly double of today’s estimated construction cost of $65 million.

With the proposed financing model of the first four revenue streams making up 70 percent of the annual debt, Knox County and Knoxville could be on the hook for an equally shared $1.2 million per year.

Several of the meeting participants sought to appease concerns about taxpayers making up any potential shortfalls toward the debt service.  The essence of those responses all but made light of the fact that the amount is very small relative to county and city budgets and much larger amounts of money are spent on a variety of other community-related projects. 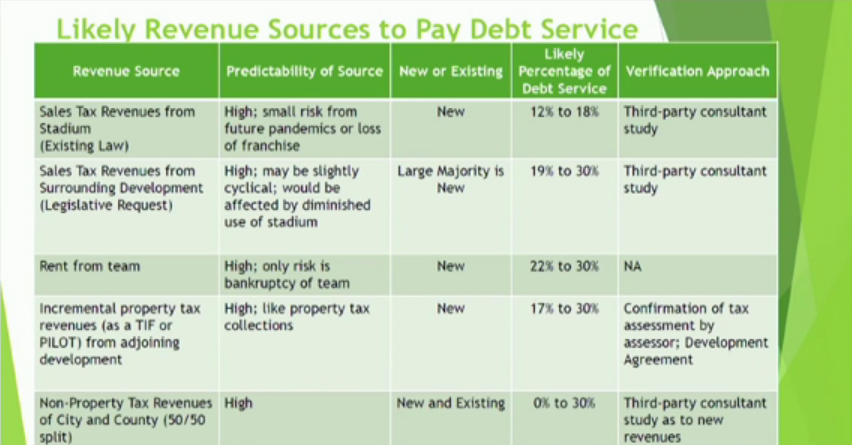 Sales tax revenues from the stadium, which would be diverted to pay the annual debt service, is estimated to contribute 12 to 18 percent.

Meanwhile, contributing an estimated 22 to 30 percent of the annual debt service is the rental fee of the stadium by the Tennessee Smokies.

When it comes to the question of whether the stadium would be built without city and county participation – in other words, taxpayer funding – “the simple answer from Mr. Boyd is no,” said Boyd Sports CEO Kirchhofer.

Caldwell later told The Star that while nothing is finalized, the Smokies rental fee is anticipated at $1 million annually for approximately 70 games per year.

The incremental increase in property tax revenues is anticipated to contribute between 17 and 30 percent toward the annual debt service.

Revenues from the proposed legislation is estimated to provide 19 to 30 percent of the annual debt service.

According to the fiscal note prepared in conjunction with the legislation, the state’s portion of the foregone sales tax revenues is $262,300 per year.  Over the term of the 30-year bond, the state’s foregone revenue would extrapolate out to $7.9 million.

The stadium sales tax amount, the diversion of which is permitted by current state law, is estimated to provide a smaller portion of 12 to 18 percent of the annual debt service.

As Mamantov reiterated during the meeting, the legislation is critical to the taxpayer funding of the stadium project.

Caldwell advised that, including smaller events, it is expected that over 250 events will be held annually at the stadium in addition to 70 Smokies baseball games.

There is no expectation of any guaranteed revenues to Boyd Sports from the rental of the stadium for events, according to Caldwell.

The anticipated revenues to Boyd Sports from the stadium rentals is yet to be estimated, pending a consultant being retained by the county and city.  The selection of the consultant, advised Caldwell, is currently in process.

On top of additional funding for K-12 education and mental health, safety and rural projects, there were also tax cuts in the amendment, The Star reported.

Included in $196 million of non-recurring miscellaneous appropriations for grants and community initiatives is a $13.5 million line item for the Sports Authority of the County of Knox and the City of Knoxville.

Representing nearly 7 percent of the total, the allocation to the sports authority for the stadium is the single largest in the category.

Department of Finance and Administration Commissioner Butch Eley told the Senate committee members that Tourism Development Zones (TDZs) – what Eley referred to as “carveouts” – were first started in 1998, with the law having been changed 17 times since.

TDZs are similar to property tax related Tax Increment Financing (TIF) districts, but instead of utilizing the incremental increase in property tax revenues, TDZs use sales tax to pay off the associated debt.

Over the next five years, Eley told the committee, existing carveouts will siphon off around $580 million in state tax revenues.

Eley said it’s a concern when portions of the state’s tax base is carved out, especially when the state’s financial situation 20 to 30 years into the future is unknown at the time the carveout is approved.

An additional concern particularly with sports and entertainment venues, Sen. Bo Watson (R-Hixson) and Eley discussed, is that the terms are often requested to be extended for an additional 20 or 30 years beyond the initial 20- to 30-year term.

As such, Eley reasoned that the preference is to provide one-time grant funding.  The approach would have the added benefit of having the time for experts to examine the economic impact and then providing funding based upon agreed-upon outcomes.

Jacobs provided a statement to the Tennessee Conservatives Union (TCU), expressing his appreciation for Lee’s budget amendment, which TCU posted on Facebook.

SB 0783, which may become moot in light of Lee’s budget amendment, is scheduled to be taken up by the Senate Finance, Ways and Means Committee on Tuesday, April 20.

The Stadium Proposal Public Meeting held on March 25, 2021, can be watched here.

The Tennessee Star asked Boyd Sports for comment, but was not able to respond to a request for comment by press time.

Laura Baigert is a senior reporter at The Tennessee Star.
Photo “Smokies Stadium” by Tennessee Smokies.