An official Minnesota government account tweeted word-for-word the same message as a left-wing super PAC with a less-than-spotless record.

“Thanks to [Minnesota Gov. Tim Walz], our economy is coming back stronger than ever,” the Minnesota Department of Corrections said via Twitter recently. This post came about 90 minutes after A Better Minnesota made the same exact post. 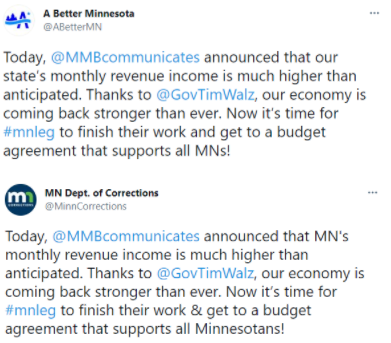 A Better Minnesota is a left-wing super PAC that moved about $4.5 million in the state during the last election cycle, per Open Secrets. It has also been accused of running misleading attack ads according to Influence Watch. The organization’s stated goal is “holding conservatives accountable.”

Over the last few months, A Better Minnesota has been hard at work cheerleading the Biden Administration, lionizing George Floyd, and attacking local Republicans.

The PAC claims that Republican Sen. “Paul Gazelka has always been dangerous for LGBTQ+ Minnesotans.” It also says senator and doctor Scott Jensen is “dangerous” because he contracts the Walz narrative on COVID-19. The PAC further warns that Minnesota conservatives in general pose a danger to democracy itself.

A Better Minnesota also runs a site called A Better COVID Recovery, which seems to exist primarily to praise Walz’s response to the virus.

There doesn’t seem to be any official links between A Better Minnesota and the Walz administration, although the recent Department of Corrections tweet lifted directly from the super-PAC’s page suggests that Walz’s staff keeps a close eye on the organization’s messaging.

Kyle Hooten is a former member of the Trump Presidential Administration where he served in the Department of Commerce as a speechwriter for the Secretary.
Photo”Tim Walz” by Tim Walz.