School administrators from seven Minnesota school districts are being required to take Critical Race Theory training, as was reported by Child Protection League.

The course is taught by Muhammad Khalifa through his leadership institute. According to Julie Quist, the board chair for Child Protection League, administrative staff from one of the school districts who wishes to remain anonymous shared handouts from the required sessions. 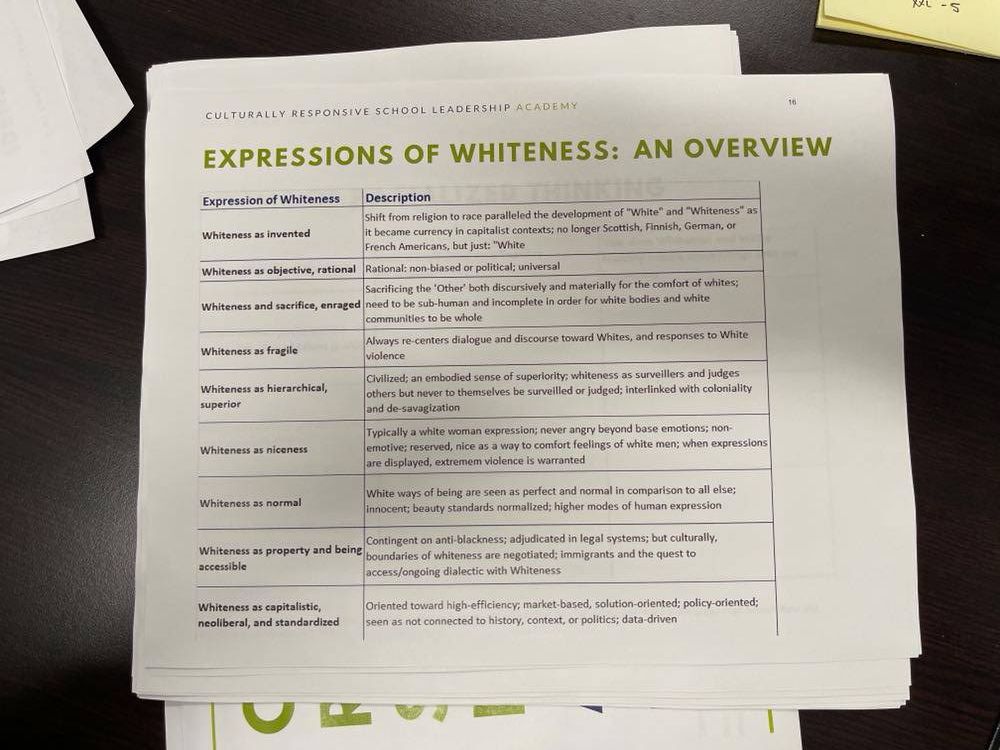 A tweet from Dr. Katie Pekel, who is the co-director of the Culturally Responsive School Leadership Institute, confirms that these sessions are taking place. The school districts that are participating include Robbinsdale, Columbia Heights, Edina, Richfield, Roseville, St. Louis Park, and West St. Paul. The sessions are held in partnership with The Minneapolis Foundation.

In an interview with The Minnesota Sun, Quist said a source within the district shared this information with Child Protection League. She said they are not sure who is required to attend from the districts, if it’s just administration or if it includes all school staff.

Khalifa is the president and CEO of the Culturally Responsive School Leadership Institute. Khalifa educates about whiteness and Islam. Khalifa was also hired to contact a highly controversial Equality Audit in the Eastern Carver County School District. Khalifa became the object of criticism after his company that specializes in Equality Audits, called Ajusted, conducted audits for several Minnesota schools. Quist said that she has obtained a copy of a survey that was distributed to parents in East Carver County, but she does not have a copy of the student equality audit. According to Quist, the school district has been unwilling to disclose that information.

Quist said that one of the reasons the parents “made headway” with the East Carver School District was because “these people wouldn’t let go and they dug into the financing even. The parents were so concerned. They are the ones paying the money to bring this guy in and he is doing all this race-based education.”

She said one of the interesting things about the situation has been that Khalifa is paid to be a consultant and then he tells the school “we need to do a survey” and then he says “we need to do an audit.” Both of those are things that they then hire his sister company to conduct.

Quist said that she wants to encourage parents to continue to speak up. She said, “It’s the hard work that pays off. That’s what I want to encourage people to do: just show up and do the work.”

Khalifa is also anti-Christian and is a senior fellow with the Yaqeen Institute, an Islamic think tank that is associated with anti-Semitism. A handout from the leadership institute describes his view of Christianity as “an excuse to classify Africans and indigenous peoples as ‘non-human.’”

In a publication called “Islamophobia and Christian Privilege: What Educators Must Know,” Khalifa calls Christian privilege and White privilege “oppressive to Muslims.” The pamphlet explains that educators need to, “Recognize that Islam is not a religion in the sense that Western Europeans separated faith from other aspects of life; It is a way of life.”

The Culturally Responsive School Leadership Institute will be hosting another session at White Bear Lake in the fall, according to their upcoming events.

Hayley Tschetter is a reporter with The Minnesota Sun | Star News Network. She graduated with a degree in Communications from the University of Northwestern-St. Paul. Send news tips to [email protected]
Photo “Muhammad Khalifa” by Muhammad Khalifa.