Residents of Cleveland will vote in November on Issue 24, an amendment to the city’s charter that would give citizens the power of oversight of the police force.

The amendment, which has been endorsed by several progressive groups, would establish an “independent” council of community members to review “everything from disciplinary oversight to recruiting and training.” 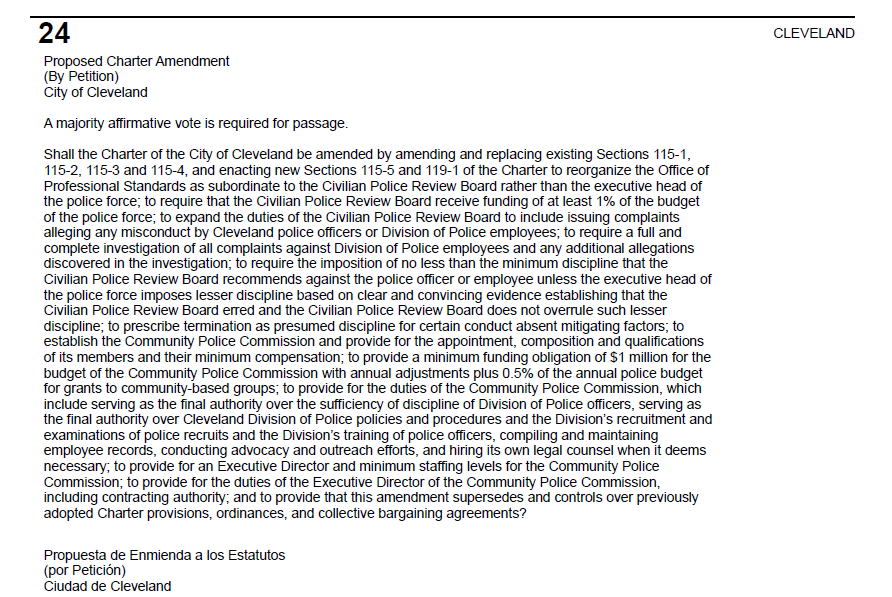 “The Cleveland Division of Police has been under a consent decree since 2014 after a DOJ investigation found a pattern of excessive use of force and other unconstitutional policing practices. The consent decree is poised to expire in 2022, and families affected by police brutality in Cleveland, along with a diverse coalition of community advocates, including former police officers — view this initiative as a way to ensure permanent accountability over a police department that has failed to properly discipline its officers,” claimed Citizens for a Safer Cleveland, the group supporting the ballot measure.

However, opponents argue that the dramatic changes would result in a commission that is unresponsive to voters and hurt police relations.

“(Issue 24) takes that power out of my hands, out of the safety director’s hands, and puts it in the charge of civilians that have no training in policing … and the citizens of this city deserve better, said Cleveland Police Chief Calvin Williams.

“No one wants to be a Cleveland police officer anymore,” said Paul Forsgren, who formed Greater Cleveland Citizens for Public Safety to oppose the issue. “The good ones we have left will quit if Issue 24 passes.”

At the same time that groups are trying to reduce police power, Cleveland has witnessed a dramatic spike in violent crime.

According to WKYC, “The latest statistic report from Cleveland police shows assaults with firearms are up more than 24% from 2020.”